Bitcoin Price Prediction: BTC Pushes Back Above $50,000 As Markets Continue To Recover

The Bitcoin price pushed back above $50,000 on Monday as buyers returned to the market after a significant selloff over the weekend. BTC had dropped by over 5% on Friday, falling to $53,752. Saturday saw the selloff intensify, with the price dropping by over 7%, slipping below 50,000, and settling at $49,683. The fall was much lesser on Sunday, as the price dropped by 0.90%, ending the weekend at $49,237. Monday saw BTC recover, as buyers pushed the price back above 50,000, with Tuesday also posting a marginal increase as BTC managed to stay in the green.

The Bitcoin price started the previous week on a positive note, registering an increase of 0.47%. However, it fell back on Tuesday, falling by 1.44% and settling at $56,971. Wednesday saw another marginal increase, as the price rose by 0.45%. BTC saw the price drop again on Thursday, as the markets turned bearish, dropping by 1.04% and settling at $56,634. BTC experienced a significant selloff on Friday, as the price dropped to $53,752 after registering a drop of over 5%. 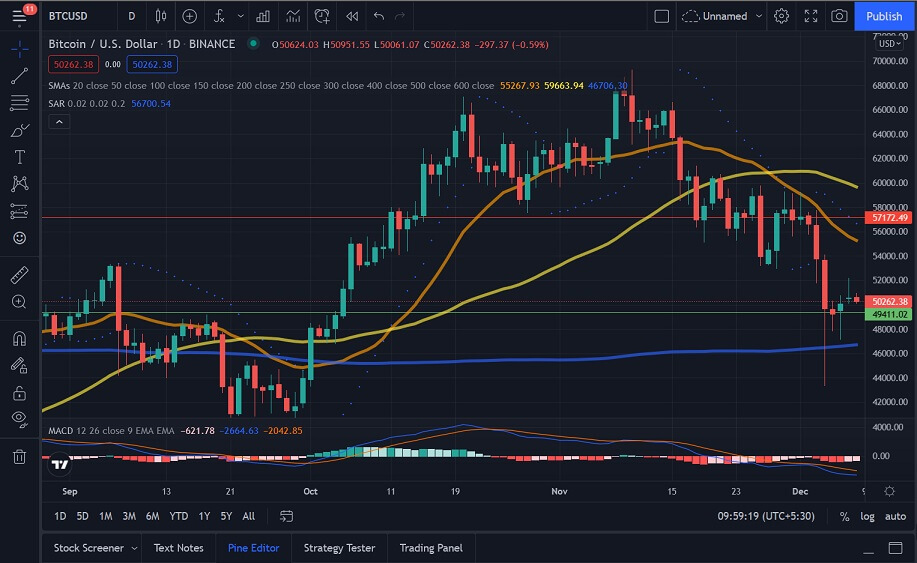 We can see that the Parabolic SAR is still bearish, indicating that we could see the price drop further during the ongoing session.

Looking at IntoTheBlock’s IOMAP for the Bitcoin price, we can see that BTC faces strong resistance around $57,155. At this price level, over 2 million addresses have sold more than 1.1 million BTC.

We can see that the MACD is bullish; however, if the price continues to drop, we could see it flip back to bearish. 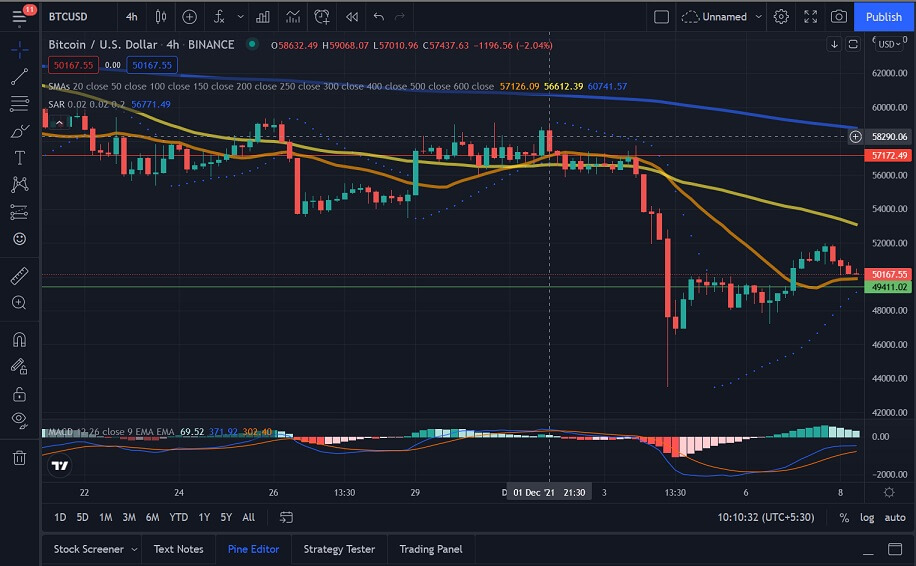 Is This Bitcoin Crash Is Different From May’s?

In a CryptoQuant post, an analyst explained the current trend in BTC exchange reserves is quite different from when the crypto crashed in May. The “all exchanges reserve” is a Bitcoin indicator that measures the total amount of coins currently present in wallets of all exchanges. If the metric’s value goes up, it means investors are depositing their coins to exchanges.

Holders usually transfer their BTC to exchange wallets for withdrawing to fiat or for purchasing altcoins. Because of this, such a trend may be bearish for the coin. On the other hand, if the exchange reserve goes down, it implies holders are withdrawing their Bitcoin to personal wallets. As investors usually do this for hodling purposes, this trend can be bullish for the crypto.

As the above graph shows, Bitcoin exchange reserves were showing an uptrend for a while before the crash. After the price decline, the indicator mostly moved sideways for months.

The value of the indicator had been dropping off for a while. However, right before the Bitcoicrash, the metric’s value suddenly shot up. But since the price crash, the reserves have again come down and looking set to resume the previous downtrend.

This means that the reserves have been declining for a while now. This is where the current market differs from that of May. The quant analyst believes that because of this trend, Bitcoin is still bullish in the mid or the long term.

Additionally, between December 2nd and December 5th, the hash rate surged 6.9% amid the high price volatility. The current hash rate figures contrast the previous correlation to Bitcoin price movement. Generally, the hash rate increases when Bitcoin’s value surges. The hash rate also tends to drop alongside the price based on historical analysis.

Although the surge in the hash rate to some extent can be viewed as a mystery, several factors might be contributing to the metric. It’s an indicator the network’s mining difficulty has dropped, making it easier to mine despite the correction.

The hash rate has also increased steadily, pointing to a surge in Bitcoin mining power alongside the cryptocurrency’s adoption. Furthermore, a rising hash rate also highlights that the mining activities are back to normal levels after China initiated a crackdown on the sector. Bitcoin’s value plunged alongside the hash rata earlier after Chinese authorities began outlawing mining.

Notably, at the time, China controlled a significant share of the global Bitcoin mining activity forcing operators to settle in other friendly jurisdictions.

Kotak, one of India’s leading private banks, has reportedly opened its gates to the crypto community, per an Economic Times report. The banking giant announced it has partnered with the leading crypto exchange WazirX, which would allow traders to use the banking services to liquidate their funds.

The partnership between the two parties is being seen as a breakthrough for the crypto community, given Indian banks have frozen crypto payments and withdrawals for the past eight months. A source familiar with the matter told Cointelegraph:

“WazirX has opened an account with Kotak which can be used to receive and pay money to investors trading on the exchange. The account is yet to become operational. Paperwork, KYC, and some testing are on.”

Earlier, private banks in India have refused to do business with crypto platforms, citing a lack of clarity on regulations, and were often found using non-valid circulars from the Reserve Bank of India (RBI) to deny services.

The latest partnership between one of the leading Indian crypto exchanges, WazirX, and Kotak also hints toward positive crypto regulations in the making. The Indian government plans to discuss the cryptocurrency bill during the ongoing winter parliamentary session. Industry insiders suggest the government regulate digital assets as an asset class rather than imposing a blanket ban.

Looking at the Bitcoin price chart, we can see that BTC has recovered during the week, although the current session sees the price down. BTC has strong support at around $49,500, so we could see BTC recover and push towards $50,500.