The Bitcoin price has recovered strongly over the weekend, currently up by over 5% in the ongoing session. BTC had dropped by over 8% on Friday, as the price slipped below $54,000 and settled at $53,947. The weekend saw the price rise by 2% on Saturday before dropping by 1.68% on Sunday and settling at $54,098. The current session sees BTC up significantly, with the price having gone past $57,000.

The Bitcoin price started the previous weekend, registering an increase of over 3% on Saturday, rising to $59,914. However, with the 50-day SMA acting as resistance at this level, BTC dropped marginally on Sunday, dropping by 0.19%. Monday saw the bearish sentiment continue, as sellers pushed the price to $56,335, registering a drop of almost 6%. However, the price recovered on Tuesday, as BTC pushed up by 2.38% and settled at $57,678. Despite the positive session on Tuesday, BTC fell marginally on Wednesday. 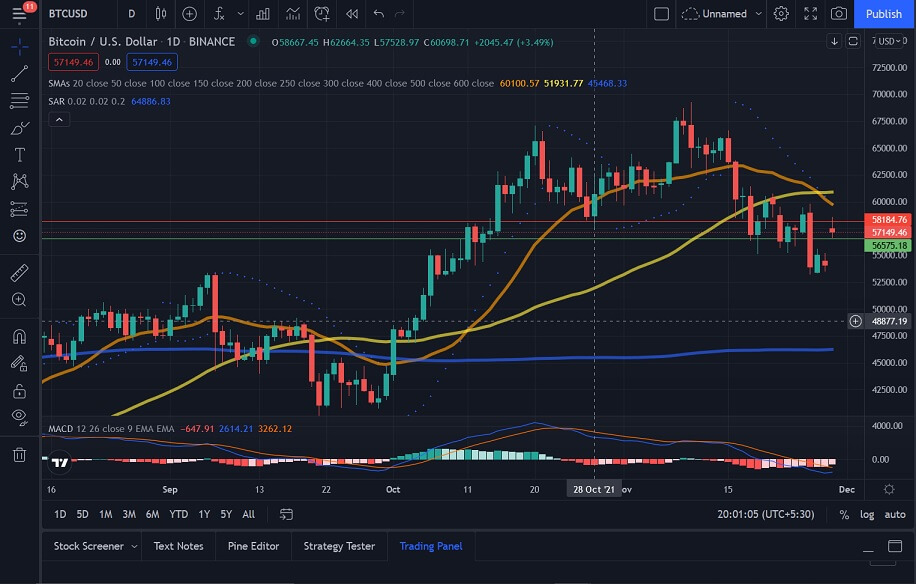 After Wednesday’s marginal drop, the Bitcoin price pushed up on Thursday, as it rose by 2.50% and settled at $58,813. BTC dropped significantly on Friday, with the price falling by over 8% and settling at $53,947. Despite the bearish sentiment, BTC pushed up on Saturday, registered an increase of 2% on Saturday, and moved up to $55,024. However, Sunday saw the price fall back, dropping to $54,098, before pushing up significantly during the current session and moving past $57,000.

We can see that the Parabolic SAR is currently bearish, indicating that the price could drop during the current session.

Looking at IntoTheBlock’s IOMAP for the Bitcoin price, we can see that BTC has strong support at around $56,521. At this price level, more than 1.8 million addresses have bought 1.12 million BTC. 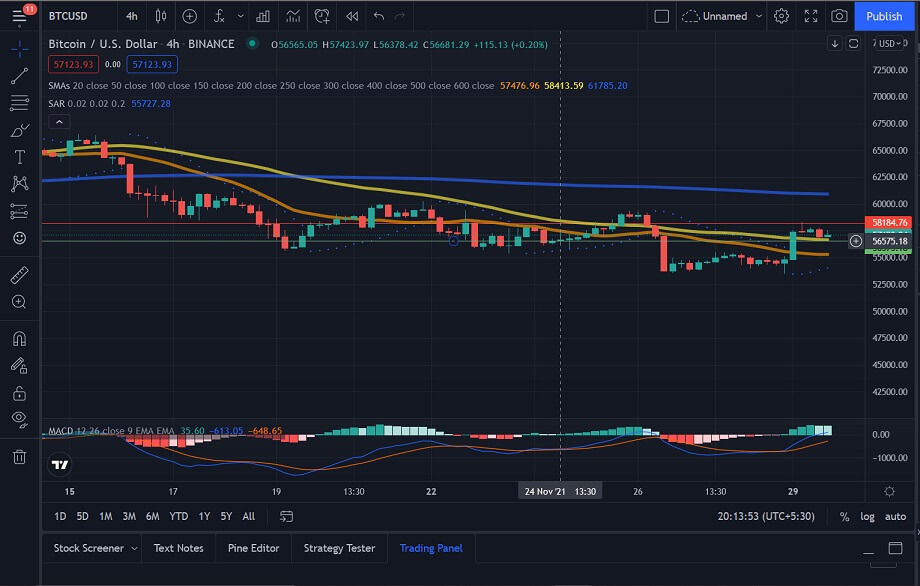 Since El Salvador outlined plans to adopt Bitcoin as legal tender in June 2021, numerous global financial organizations have tried to warn the country not to do it. The Bank of England, spearheaded by BTC critic Andrew Bailey, was one of the most vocal ones.

The institution recently doubled down on its belief that El Salvador should use only fiat money. Shortly after El Salvador President Nayib Bukele announced plans to build a Bitcoin City, Bailey said:

“It concerns me that a country would choose it as its national currency. What would worry me most of all is, do the citizens of El Salvador understand the nature and volatility of the currency they have.”

Although it has been just a few months since El Salvador legalized BTC, the experiment seems to be working just fine, according to the updates published by President Bukele or people from his administration.

While addressing Bailey’s most recent comments, President Bukele responded in a somewhat ironic fashion, especially about the “genuine” concerns that the BOE has for the people of El Salvador:

“Bank of England is “worried about El Salvador’s adoption of Bitcoin? Really? I guess Bank of England’s interest in the well-being of our people is genuine. Right? I mean, they have always cared about our people. Always. Gotta love Bank of England.”

Looking at the Bitcoin price chart, we can see that BTC has pushed above $57,000 during the current session. If the current sentiment persists, we could see BTC push to $57,500. However, if sellers take control of the session, the price could drop below $57,000.