The Bitcoin price fell back during the current session, registering a marginal drop as it struggles to climb above $45,000. BTC had started the week on a fairly bullish note, rising above the 50-day SMA and moving to $43,886. Tuesday saw BTC register a marginal increase as it moved past the $44,000 level before rising by 0.73% on Wednesday and pushing up to $44,437. The current session has seen BTC register a marginal drop as it struggles to push to $45,000.

The Bitcoin price started the previous week on a fairly positive note, rising by 1.42% on Monday and pushing to $38,482. On Tuesday, the price continued to push higher, registering a marginal increase and pushing to $38,760, where the 20-day SMA was acting as resistance. As a result, the price fell back on Wednesday, dropping by nearly 5% and falling to $36,986 before registering a marginal recovery on Thursday and rising to $37,350. Friday saw BTC register a significant surge, as it rose by over 11%, pushed past the 20-day SMA, and settled at $41,623. 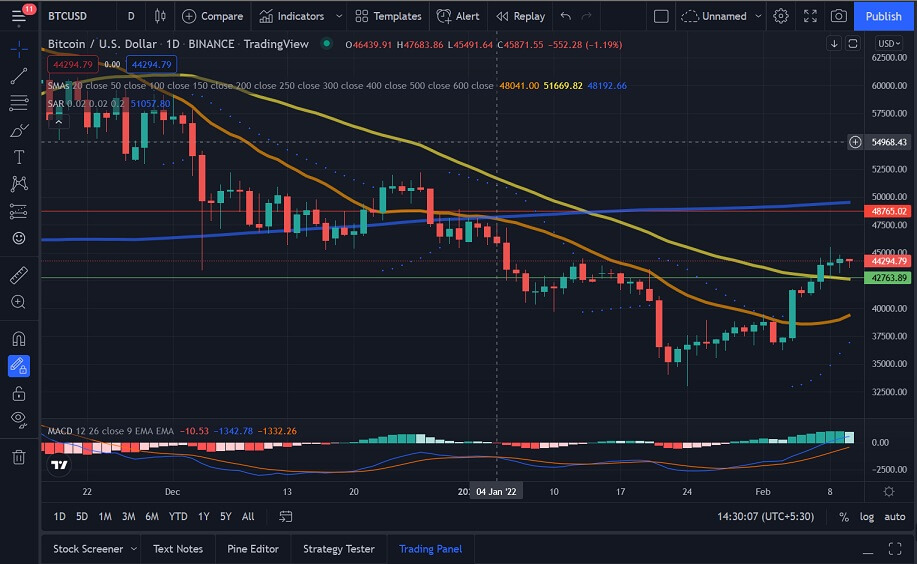 After surging by over 11% on Friday, the Bitcoin price fell back over the weekend, registering a marginal drop on Saturday and then rising by over 2% on Sunday to end the weekend at $42,409. Monday saw BTC remain bullish, as the price pushed above the 50-day SMA and rose to $43,886. BTC continued to push higher from this level, rising to $44,116 on Tuesday and then to $44,437 on Wednesday before dropping during the ongoing session.

IntoTheBlock’s IOMAP for the Bitcoin price shows us that BTC faces strong resistance at around $48,789. At this price level, over 1.6 million addresses have sold more than 993,000 BTC.

We can see that the MACD is currently bearish, but if BTC can recover from this level, we could see it flip to bullish. 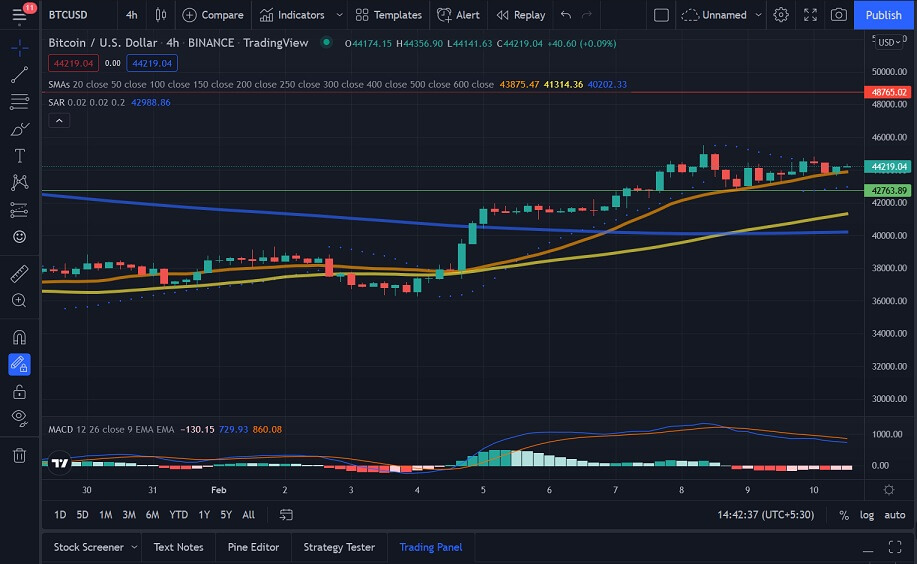 Users of Apple Pay will soon be able to utilize the iPhone’s Tap to Pay function to make Bitcoin and other cryptocurrency purchases at a range of popular stores and services shortly.

Apple recently revealed plans to include the new feature that essentially transforms its smartphone into a point-of-sale device for companies and merchants. With the use of near-field communication (NFC), iPhone-owning businesses may accept contactless payments by using their mobile devices like point-of-sale machines.

In a statement, Apple said that the Tap to Pay feature will be available shortly and would expand support to “Apple Pay, contactless credit and debit cards, and other digital wallets.”

“We just introduced Tap to Pay on iPhone, a great way for millions of small businesses to accept contactless payments right from their iPhone. It’s easy, secure, and will be coming out later this year.”

Essentially, customers who use Coinbase Card, Crypto.com Visa Card, or a similar payments card will be able to utilize their cryptocurrency holdings to make payments through Tap to Pay, provided that Apple does not set a direct barrier in the way of such transactions.

Notably, Apple has selected payment platform Stripe as its first partner for the iPhone’s Tap to Pay feature, which last year had received over $350 million investment from eCommerce giant Shopify.

However, Apple also mentioned Stripe wouldn’t be the only platform to enable payments, it said:

“Stripe will be the first payment platform to offer Tap to Pay on iPhone to their business customers, including the Shopify Point of Sale app this spring. Additional payment platforms and apps will follow later this year.”

A recent study has highlighted the extent of cryptocurrency adoption among United States citizens, with various assets becoming the preferred investment choices compared to traditional means. According to The State of Consumer Banking & Payments report by Morning Consult, most American adults at 24% owned cryptocurrencies as of 2021.

The figure was slightly higher than 23% of Americans who own certificates of deposit. Notably, a certificate of deposit refers to ​​a savings account holding a fixed amount of money for a specified period.

Elsewhere, most of the respondents at 31% owned brokerage accounts while 14% held a Robo-adviser investment account. The study was conducted between December 23-25, 2021, while sampling feedback from 2,200 United States adults.

The increasing crypto ownership aligned with the 2021 general market growth led by Bitcoin and meme coins. Additionally, last year ushered in an influx of institutional investors in the crypto space. It is worth noting that keeping money in the bank and investing in cryptocurrencies offer opposite scenarios based on factors like risk and reward. Bank savings accounts are insured and considered stable in value, while cryptocurrencies are volatile with no clear backing.

However, digital currencies have offered an opportunity to make quick money over the years. For instance, in 2021 alone, the value of Bitcoin surged by at least 60% despite a series of price corrections. Notably, saving money in the bank has in recent years come under scrutiny due to the low-interest rate environment alongside the impact of rising inflation.

Bitcoin, the largest cryptocurrency by market cap, is predicted to reach $150,000 in the long term by American banking giant JPMorgan. This represents a slight increase from last year's target of $146,000.

For Bitcoin to reach this target, the leading cryptocurrency would have to match the private sector investment in gold, estimated to be roughly $2.7 trillion. Bitcoin's market cap peaked at $1.3 trillion on Nov. 10.

At the same time, the bank states that the fair value of the flagship cryptocurrency currently stands at around $38,000, which is roughly 13% lower from where it is trading right now on major spot exchanges. JPMorgan's assessment is based on the fact that Bitcoin's volatility is four times higher compared to that of gold. The crypto king would have to become substantially less volatile to become more valuable.

Another bear market is seen as the biggest hindrance to Bitcoin adoption by JPMorgan:

"The biggest challenge for Bitcoin going forward is its volatility and the boom and bust cycles that hinder further institutional adoption."

Bitcoin careened to a multi-month low of $32,950 on Jan. 24 before staging an impressive comeback. On Feb. 8, Bitcoin peaked at $45,501 on the Bitstamp exchange, but the rally stalled shortly after that. BTC fell in early November before seeing the steep correction that was mainly driven by concerns surrounding the U.S. Federal Reserve potentially hiking interest rates multiple times this year.