The Bitcoin price stalled during the current session, as sellers pushed BTC down marginally, stopping its march towards $45,000. BTC had ended the weekend in the red, falling by nearly 4% on Sunday and ending the weekend at $37,741. Monday saw BTC surge by over 14% as it moved past the 20 and 50-day SMAs and settled at $43,171. Tuesday saw BTC continue to push higher, rising by 3.01% to $44,469 before dropping back during the current session. 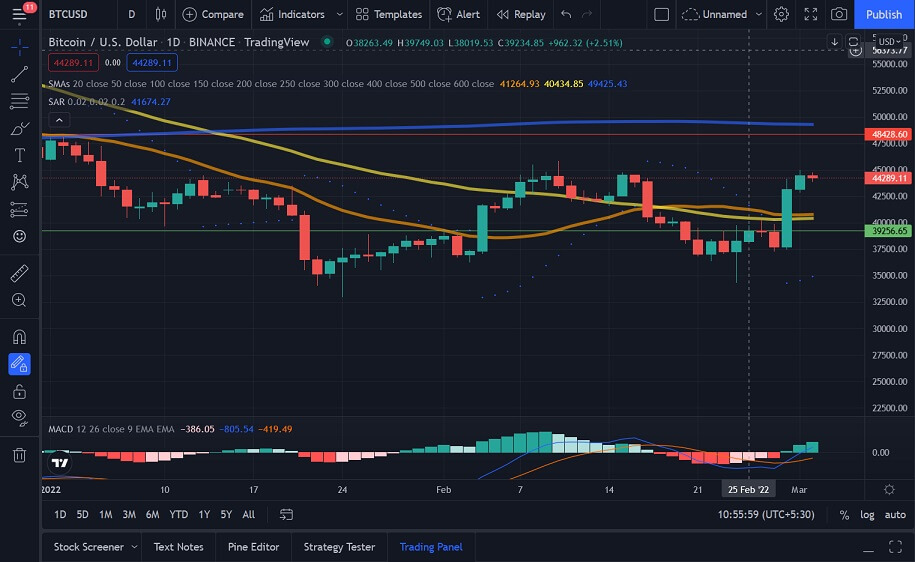 After pushing to $39,234 on Friday, the Bitcoin price fell back over the weekend, registering a marginal drop on Saturday and then dropping by nearly 4% on Sunday, ending the weekend on a bearish note at $37,741. BTC registered a strong recovery on Monday, starting the week by surging over 14%, moving past the 20 and 50-day SMAs, and settling at $43,171. Tuesday saw BTC continue to push higher, as BTC rose by just over 3%, moving to $44,469 before dropping back during the ongoing session.

We can see that the MACD is currently bullish, indicating that we could see BTC recover and push higher.

Looking at IntoTheBlock’s IOMAP for the Bitcoin price, we can see that BTC faces strong resistance at around $48,453. At this price level, over 2.3 million addresses have sold more than 1.1 million BTC. BTC also has support at around $39,214, where over 952,000 addresses have bought over 771,000 BTC.

We can see that the Parabolic SAR and MACD are both bullish, indicating that we could see the price drop further. 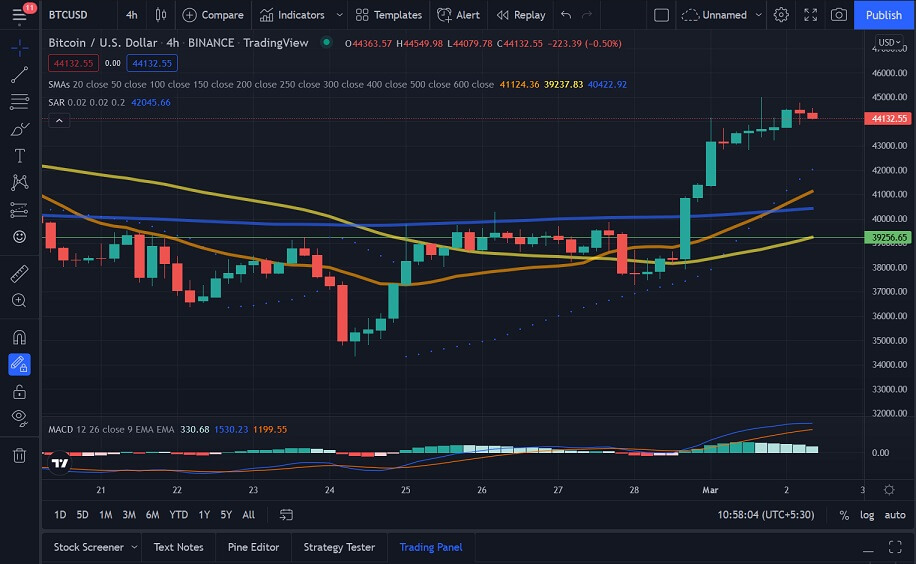 Hacker organization Anonymous has reportedly offered Russian troops payments in Bitcoin to hand over their tanks. The group would pay more than $52,000 in BTC for each surrendered combat vehicle. A few days ago, Mykhailo Fedorov, Ukraine’s Vice PR, announced the government would create an IT army. He said:

“We need digital talents. There will be tasks for everyone. We continue to fight on the cyber front.”

Anonymous has also conducted several cyber-attacks on Russia. In just two days, the organization breached more than 300 Russian targets collecting over RUB 1 billion (around $10 million). In another attempt to lessen the power of the Russian forces and make extra profits, Anonymous reportedly offered tank crews $52,000 worth of Bitcoin for each surrendered battle machine. Those who wish to exchange such vehicles for cryptocurrency need to wave a white flag and use the password “million” so that the hacking group can recognize them.

“Russian soldiers, everyone who wants to live with their families, children, and not die, the Anonymous global community has collected RUB 1,225,043 in bitcoin to help you.”

Anonymous declared war on Vladimir Putin at the end of February. Then, the group warned that Russia’s leader would “face unprecedented cyberattacks from all corners of the world” should he not stop his invasion of Ukraine.

Despite not entering into direct military combat with Russian forces in Ukraine, the “big powers” have declared economic war on Russia. The EU banned transactions with the Russian Central Bank to cut its monetary connection with Western Europe.

The “real” daily Bitcoin (BTC) volume spiked to levels not seen for three months amid the Russian invasion of Ukraine. According to the latest weekly update report from blockchain analytics firm Arcane Research, real daily BTC trading volume surged above the $10 billion on Feb. 24, the first day of the invasion), marking the highest daily volume recorded since Dec. 4.

The firm cited “new crypto narratives” that have risen to the forefront amongst the ongoing crisis, such as crypto fundraising in Ukraine, along with demand increasing in relation to the western block and Russia introducing “the strictest capital controls in decades.”

Strong selling pressure from investors looking to take risk off the table on Feb. 24 may also have contributed to the surge in daily BTC volume, as the price dipped 10% on that day.  The term “real trading volume” refers to data sourced from exchanges that are believed to be reputable and free of wash trading activities. In this instance, Arcane Research pulled its figures from the Bitwise ten exchanges (consisting of Coinbase, Kraken, Poloniex, Binance, etc.) along with LMAX and FTX.

In comparison, crypto data aggregators such as Coingecko — who draw data from more than 500 exchanges — had BTC’s trading volume on Feb. 24 at around the $25 billion regions. Messari’s real BTC volume chart (which includes a number of additional exchanges) paints a similar picture to Arcane’s, recording a spike to around $11.6 billion worth of volume last Thursday.

Arcane Research also highlighted that the price of BTC saw its largest daily percentage gain in over a year on Feb. 28, with the price jumping 14.5% in the space of 24 hours. The firm attributed the surge in part to Russian and Ukrainian crypto adoption (although the actual volume is relatively small in global terms) along with increased speculation on crypto’s use cases amid the current Russian invasion.

Bitcoin miners brought in $1.06 billion in revenues during February 2022, according to The Block Research. Most of these revenues came from the block subsidy ($1.05 billion) and only a small portion from transaction fees ($12.92 million).

Revenue totals have dropped for the fourth consecutive month, with a month-over-month decrease of 12.9% between January and February. Total revenues in October were $1.72 billion and have been falling since. They hit an all-time high in March 2021, with a total of $1.75 billion.

Block, the payments company formerly-known as Square, is officially throwing its hat into the bitcoin mining game. Block CEO Jack Dorsey initially teased such a move last fall, highlighting a possible bid "based on custom silicon and open source for individuals and businesses worldwide." Now, statements from Block executives and recent job postings offer more specifics on what that venture will look like.

In a tweet thread, the company's general manager for hardware, Tom Templeton, doubled down on the decentralization focus.

"We want to make mining more distributed and efficient in every way, from buying, to set up, to maintenance, to mining. We’re interested because mining goes far beyond creating new bitcoin. We see it as a long-term need for a future that is fully decentralized and permissionless."

Looking at the Bitcoin price chart, we see that BTC is marginally down during the current session after making a strong start to the week. If bearish sentiment drives the price down, we could see BTC fall below $44,000. However, if BTC can recover, we could see it push towards $45,000.

When Is The Right Time To Invest And Sell Bitcoin?

How Many Bitcoins Are Left?