The Bitcoin price is down marginally as sellers look to push the price to $56,000. BTC had started the week on a positive note, rising by almost 8% on Monday before registering a drop of over 2% on Tuesday. On Wednesday, the price did not see much movement, registering only a marginal increase, before dropping back on Thursday and settling at $56,927. The current session sees buyers and sellers struggling for control, with the price down to $56,500

The Bitcoin price started the previous week on an extremely bearish note, dropping by almost 6% on Monday. However, it recovered on Tuesday, rising by 2.38% and settling at $57,678, but fell back on Wednesday after registering a marginal drop. On Thursday, the price pushed back up, rising by 2.50% and settling at $58,813, before registering a significant drop of over 8% on Friday and dropping to $53,947. 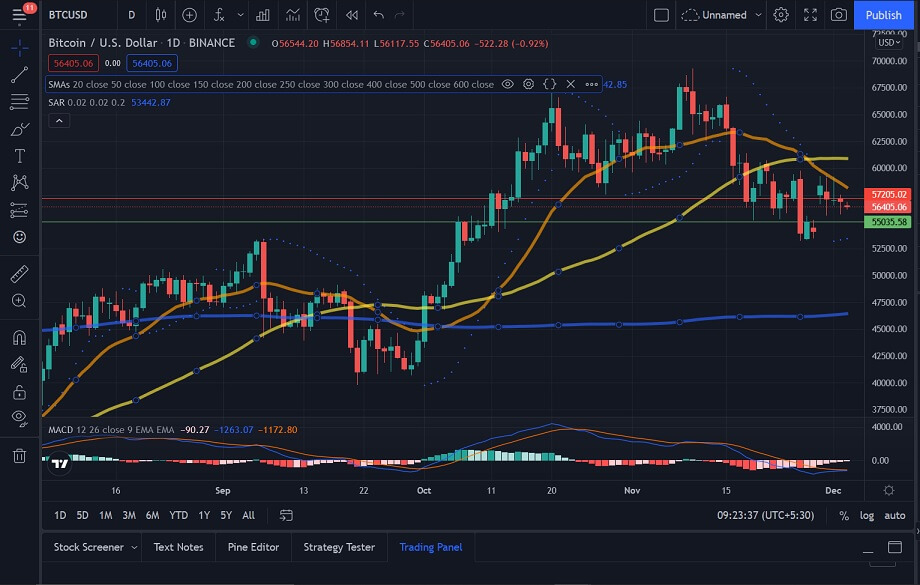 After falling by over 8% on Friday, the Bitcoin price pushed up on Saturday, as it rose by 2%. However, the price dropped back on Sunday, ending the weekend at $54,098. The week started with a significant push, as BTC rose by almost 8% on Monday, pushing up to $58,360. Despite the bullish sentiment, the price dropped back on Tuesday, falling by just over 2% and settling at $57,160. BTC did not register any significant movement on Wednesday or Thursday but fell back during the current session, with the price currently dropping towards $56,000.

We can see that the Parabolic SAR has flipped to bullish, indicating that we could see the price push higher. However, if the price continues to drop, we could see it flip back to bearish.

Looking at IntoTheBlock’s IOMAP for the Bitcoin price, we can see that BTC faces strong resistance at around $57,208. Over 2.6 million addresses have sold more than 1.5 million BTC at this price level. 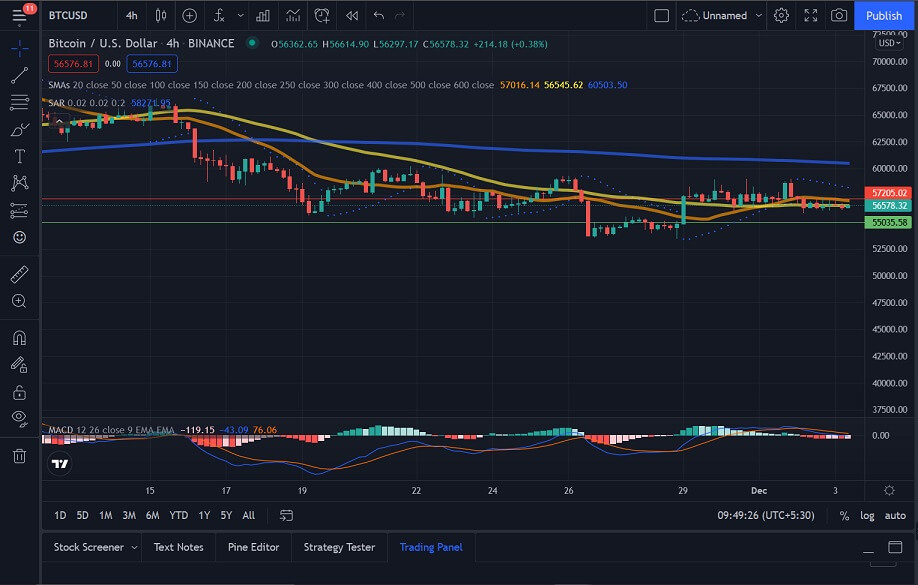 Digital payments company Square recently announced that it has changed its name to Block, seemingly focusing on blockchain technology.

In a tweet, Square said the rebrand would bring the payments firm together with Cash App, the decentralized Bitcoin exchange project tbDEX, and music and video streaming platform Tidal.

An accompanying news release said that Square Crypto, the cryptocurrency-focused branch of the payment firm, will also be changing its name to Spiral and joining the Block family. The firm said:

“Block references the neighborhood blocks where we find our sellers, a blockchain, block parties full of music, obstacles to overcome, a section of code, building blocks, and of course, tungsten cubes. We’ve been working to make this change for over a year, and it only represents a change of our official corporate name; not our purpose, our vision, our structure or how we operate.”

The rebranding comes two days after Square CEO Jack Dorsey resigned his position at Twitter, citing the need to give his replacement, Parag Agrawal, the space to work without his influence at the social media giant. At the time, many speculated that Dorsey would get deeper into crypto and blockchain through Square’s operations, in much the same way Facebook turned its focus away from social media with a rebranding to Meta.

“Block is a new name, but our purpose of economic empowerment remains the same. No matter how we grow or change, we will continue to build tools to help increase access to the economy.”

SEC Chair: Bitcoin Competes With The US Banking System

US Securities and Exchange Commission (SEC) Chairman Gary Gensler recently said that Bitcoin is a competitor to the US banking system and its worldwide consensus.

“We layered over our digital money system about 40 years ago with money laundering and various sanctions and regimes around the globe; we layered that over a digital currency system called our banking system. In 2008, Satoshi Nakamoto wrote this paper in part as a reaction, an off-the-grid type of approach. It’s not surprising that there’s some competition that you and I don’t support but that’s trying to undermine that worldwide consensus.”

Gensler’s remarks came during the DACOM Summit 2021, a compliance and market integrity event. The SEC chairman drew a dividing line between Bitcoin and digital assets. While Gensler did not vouch for one or the other, he acknowledged their differences, highlighting the securities-like nature of many projects.

Referring to the many tokens being created and traded worldwide outside of his regulatory scope, he said:

“These have largely been about raising money for entrepreneurs, and as such, meet the time-tested definition of an investment contract and thus falls under the securities laws.”

Gensler reiterated how he views the cryptocurrency sector as a “Wild West.” He urged the “gatekeepers” of the many cryptocurrency projects in existence to “find a path to register and get within the investor protection remit.” Such projects, “whether it’s a trading platform or token,” he added, are “not going to evolve well outside of the tenets of public policy.”

Looking at the Bitcoin price chart, we can see that buyers and sellers are struggling to control the ongoing session. If buyers manage to retain control of the session, we could see the price push to $57,000. However, if sellers retain control, BTC could drop to $56,000.