The Bitcoin price continued its bearish trend for the week, as sellers continued to drive the price down. On Tuesday, BTC had pushed up by over 3%, rising to $44,469. The price fell back after reaching this level, dropping by 1.27% on Wednesday and then registering a sharp drop of over 3%, driving the price down to $42,473. BTC continued to drop during the ongoing session, as sellers now look to push it below $41,000.

The Bitcoin price started the previous week on a bearish note, falling by over 3% and settling at $37,056. On Tuesday, the price recovered, pushing up by $38,262 before falling back in the red on Wednesday, falling by 2.62% and settling at $37,260. BTC made a strong recovery after reaching this level, as the price rose by nearly 3% on Thursday after a highly volatile session and pushed to $38,272. Friday saw BTC continue to push higher, as the price rose by 2.51%, moving to $39,234. 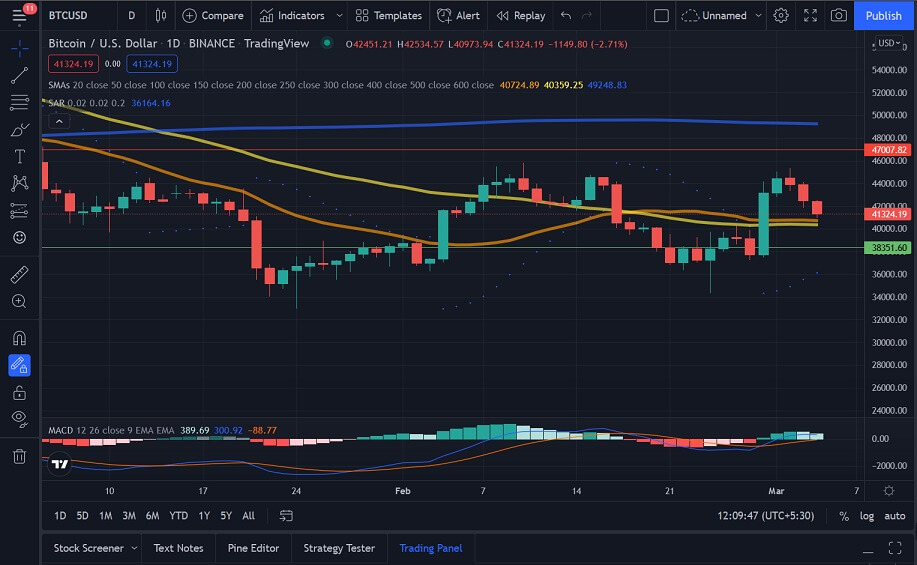 The Bitcoin price fell back in the red over the weekend, as it registered a marginal drop on Saturday and then fell by 3.60% on Sunday to end the weekend on a bearish note at $37,741. Despite the bearish sentiment over the weekend, BTC surged over 14% on Monday, pushing above the 20 and 50-day SMAs and moving to $43,171. On Tuesday, BTC continued to push higher, rising to $44,469 before dropping back on Wednesday, falling to $43,904. BTC continued to drop on Thursday, falling by 3.26% to $42,473 and then slipping below the $42,000 level during the ongoing session.

We can see that the MACD is currently bullish, but if BTC continues to drop, we could see it flip to bearish.

We can see that the MACD and Parabolic SAR are both still bearish, indicating that we could see the price drop further.

More On Bitcoin: Pros and Cons of Investing in Bitcoin 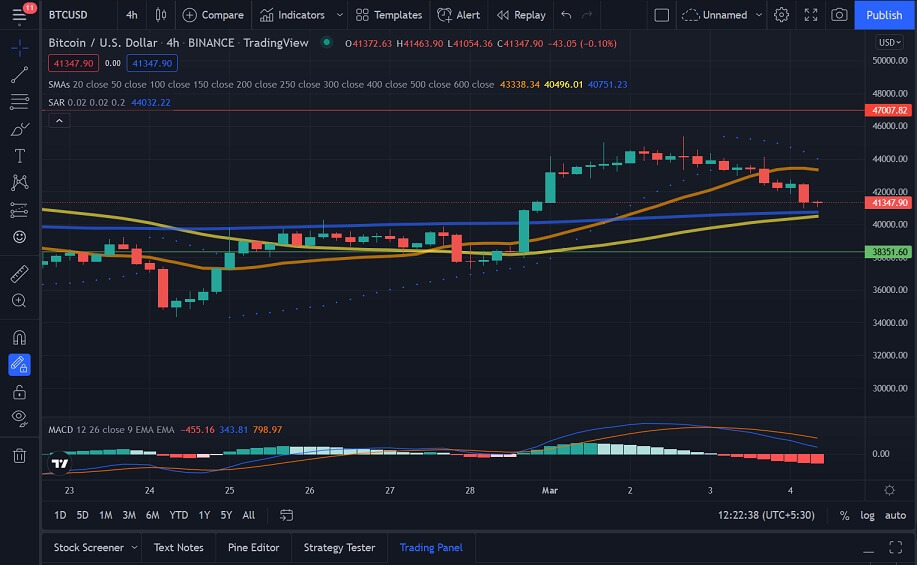 Billionaire Ken Griffin Admits He Was Wrong About Bitcoin, Crypto

After being one of the fledgling critics of the young industry, billionaire Ken Griffin distinguished himself by buying up at the last minute a copy of the American Constitution that fans and admirers of the crypto industry wanted to acquire by organizing themselves around ConstitutionDao.

Dao is a decentralized autonomous organization whose objective is to replace hedge funds and the hierarchical organization of the classic corporate structure. In addition to this fact of war, Griffin had harsh words about Bitcoin, of which he often denied the usefulness or even its existence.

He has thus dealt with the most popular cryptocurrency of "jihadist call that we don't believe in the dollar." Griffin is ranked 41st in Bloomberg's Billionaires Index, with an estimated net worth of $30.2 billion.

Griffin said at the Economic Club of Chicago last October:

"I wish all this passion and energy that went to crypto was directed towards making the United States stronger. It's a jihadist call that we don't believe in the dollar. What a crazy concept this is, that we as a country embrace so many bright, young, talented people to come up with a replacement for our reserve currency."

However, in an interview with “Bloomberg Wealth with David Rubenstein,” he admits he was wrong and seems to want to start a new relationship with the crypto industry.

"Crypto has been one of the great stories in finance over the course of the last 15 years. And I’ll be clear, I’ve been in the naysayer camp over that period of time. But the crypto market today has a market capitalization of about $2 trillion in round numbers, which tells you that I haven’t been right on this call."

Multinational financial services giant Charles Schwab has responded to client demand to invest in cryptocurrency by filing with the United States Securities and Exchange Commission (SEC) to launch a Crypto Economy ETF.

This filing comes just a week after the head of investor services at Schwab, Jonathan Craig, told news source Financial Advisor IQ that one in six Schwab clients had expressed interest in making crypto investments. He said:

“A full 16% of Schwab’s clients plan to put money into cryptocurrencies in the first half of the year.”

The proposed exchange-traded fund (ETF) aims to track the returns of an index designed to “deliver global exposure to companies that may benefit from the development or utilization of cryptocurrencies and other digital assets.”

An ETF allows investors to speculate on the price of a basket of assets without needing to hold custody or own them in any way. Schwab’s Crypto Economy ETF would not directly invest in crypto or ICOs, according to the filing. It would, however, invest in companies that deal with crypto.

More On Bitcoin: What Are Bitcoin ETFs?

Looking at the Bitcoin price chart, we can see that BTC has been extremely bearish over the past couple of sessions. If the current sentiment persists, we could see BTC drop to $41,000. However, if the price can recover, we could see BTC push past $42,000.

Is Bitcoin A Good Investment & Should I Invest In Bitcoin?

What Might Happen If You Invest $100 In Bitcoin Today?