Bitcoin Price Prediction: BTC Sends Shivers Through The Market As It Nears $35,000

The Bitcoin price fell back in the red after posting somewhat of a recovery on Sunday, with BTC currently down by almost 3% at the time of writing. BTC had dropped by 2.36% on Thursday, bringing the price down to $40,735. Friday saw a significant drop as BTC dropped over 10%, slipped below the $40,000 level, and settled at $36,551. The weekend started with the bearish note persisting on Saturday, as BTC fell by nearly 4%, before registering a recovery on Saturday and moving to $36,347. However, the price is back in the red during the ongoing session.

The Bitcoin price started the previous weekend on a fairly bearish note, dropping by 0.28% on Friday. However, the price recovered on Saturday, rising by 1.59% before registering a marginal drop on Sunday and ending the weekend at $43,122. The price continued to drop on Monday, falling by nearly 2% and dropping to $42,287. Despite the bearish sentiment, BTC was able to register a marginal recovery on Tuesday but fell back in the red on Wednesday, dropping by 1.62% to $41,717. 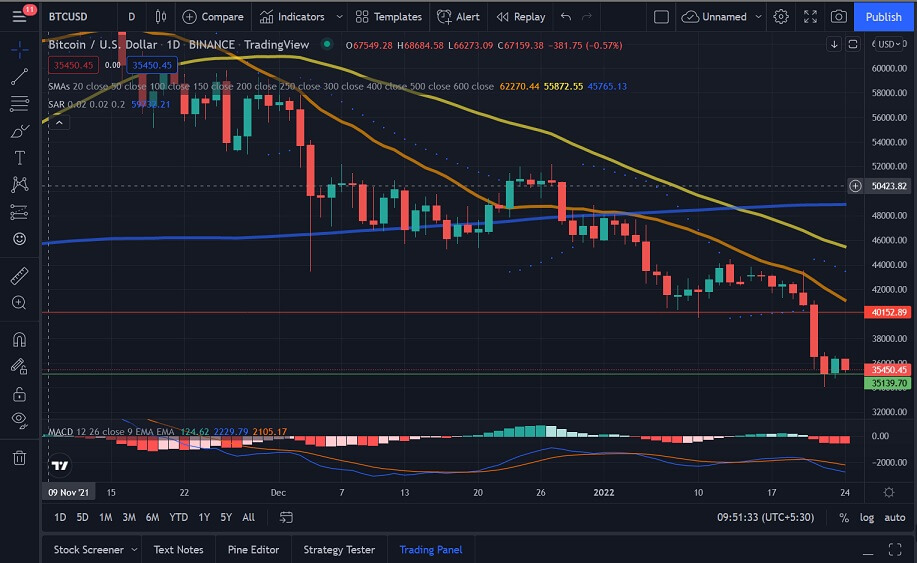 Looking at IntoTheBlock’s IOMAP for the Bitcoin price, we can see that BTC faces strong resistance at around $40,111. At this price level, over 229,000 addresses have sold more than 435,000 BTC.

We can see that the Parabolic SAR and MACD have flipped to bullish, indicating that we could see the price push higher. 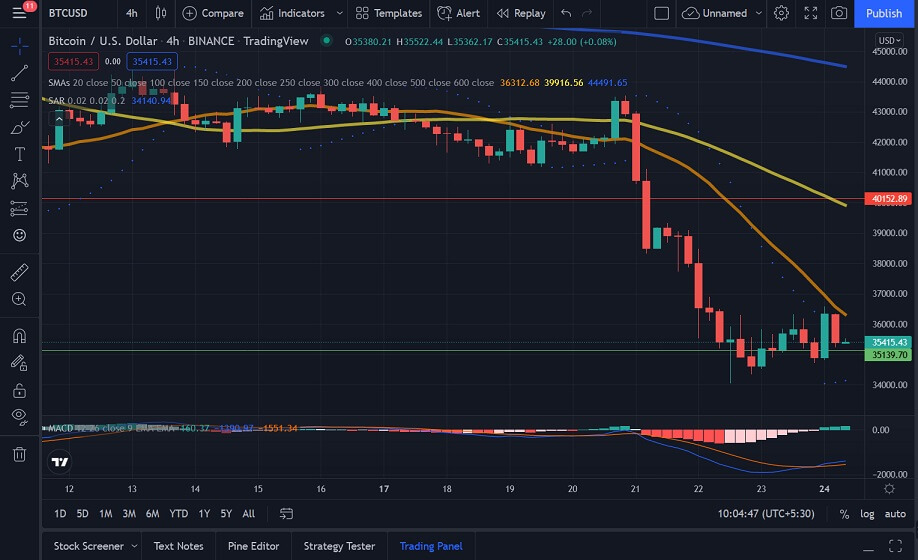 Here’s What’s Behind the Crypto Market Downturn in 2022, According To MicroStrategy CEO Michael Saylor

Bitcoin bull and MicroStrategy CEO Michael Saylor recently analyzed the factors he believes are driving the crypto market downturn at the start of a new year. In a Bloomberg interview, Saylor unveiled two factors that he says are contributing to the volatility experienced by the crypto markets so far this year.

The CEO said that there is a lot of leverage offshore, adding that many crypto exchanges can trade with up to 20x leverage.

"And those crypto exchanges have many, many tokens that are cross-collateralized. Between them and the decentralized finance [DeFi] exchanges, you can get much higher than 20x leverage. So that’s the second source of volatility.”

According to Saylor, Bitcoin is currently offering a “great entry point” for institutions, especially as legendary investors, such as Bill Miller, allocate a portion of his portfolio to the flagship cryptocurrency.

“I feel like it’s consolidating at this level. This is a great entry point for institutional investors. I talk to high net-worth individuals, family offices, public company executives, private company owners and they watched Bitcoin run up in 2021. And there are a lot of people that would be afraid to own it if it was going up 400% a year."

As the crypto market tumbled recently, El Salvador purchased 410 more Bitcoin (BTC). The country is now holding more than 1,5000 BTC, and it continues to increase the number of BTC that it holds. El Salvador President Nayib Bukele said on Twitter that the purchase was made for “only 15 million dollars,” allowing the country to buy 1500 BTC.

The country made the purchase when the market fell below $37,000 for the first time since August 2021. Bukele said:

"Nope, I was wrong, didn’t miss it. El Salvador just bought 410 Bitcoin for only 15 million dollars. Some guys are selling really cheap.”

Bitcoin has lost almost half its value since its November high. Other cryptocurrencies are following the same trend as Bitcoin. For example, Ethereum (ETH), Binance Coin (BNB), Cardano (ADA), Solana (SOL), Luna (TERRA), Polkadot (DOT), and Dogecoin (DOGE), among others.

A few days earlier, Reuters reported that Russia's central bank has proposed a ban on crypto use and mining. Russia is one of the biggest crypto-mining nations, but its central bank said that digital currencies can pose a threat to the country's financial stability.

The Russian proposal comes just a few months after China launched a full-scale clampdown on cryptocurrency, banning trading and mining. Other countries are also discussing a crypto ban. In November, India said it was preparing to introduce a bill that would regulate digital currencies, although much is still unknown about that proposal. Last week, India's prime minister Narendra Modi said that global cooperation is needed to tackle problems posed by cryptocurrencies.

Market May Be Suffering But Bitcoin And Ethereum Will Pull Back Stronger, Bloomberg Analyst

Bitcoin and Ethereum have led the market in the recent downturns that have rocked the market. Most market uptrends or downtrends begin with them, and it has raised concern among investors who believe that the market is finally heading into a stretched-out bear market.

However, Bloomberg analyst Mike McGlone is not of this opinion. In a recent newsletter, McGlone shared his thoughts on stocks and the crypto market. McGlone is bullish on Bitcoin and Ethereum.

The analyst pointed to the correlation with the stock market. This, he explains, is getting ready for a pullback, and when this happens, Bitcoin and Ethereum will benefit from this correction. McGlone said:

“Here’s my prediction: the markets pull back. We finally get a 10%, maybe 20%, correction in the stock market. All correlations are one, which is usually the way it works. Bitcoin comes out better off for it. Ethereum, potentially too.”

This pullback only refers to the top two digital assets. Talking about other cryptocurrencies, the analyst took a more bearish stance. The positivity displayed in the podcast towards top coins BTC and ETH did not translate to the rest of the market, which he does not expect to fare well despite the pullback.

McGlone especially focused on dog coins which were arguably the winners of 2021. The craze which saw various meme tokens with no utility whatsoever soar to billions of dollars in valuation was referred to as “stupid” by the Bloomberg analyst.

“The rest of the space, we do have to admit, the speculation you saw in the dog coins last year was indicative of this. It’s just stupid and we’re going to tell the story to our grandkids.”

New York’s latest mayor Eric Adams has reiterated his promise to take his first paycheck in Bitcoin. Adams made the promise during his election as part of his mission to make New York City the crypto hub of the nation. The mayor had said that he would take his first three paychecks in Bitcoin upon his election, which was held in 2020, and as he begins his run as mayor of one of the most popular cities in the world, he is keeping his promise to his constituents.

Three months ago, when Adams was elected to office, he shocked the space when he offered to take his first three paychecks in Bitcoin. This was in response to Miami’s Mayor Francis Suarez, known for transforming the city into a crypto hub, announcing that he would be the first American politician to take their first paycheck in crypto. Adams one-upped Suarez by declaring that he would be taking three paychecks in Bitcoin.

“In New York, we always go big, so I’m going to take my first THREE paychecks in Bitcoin when I become mayor. NYC is going to be the center of the cryptocurrency industry and other fast-growing, innovative industries! Just wait!”

The US government does not pay any of its employees using crypto, so Adams will be paid directly in dollars. However, the mayor plans to convert his paycheck into BTC and ETH before depositing it into his account. The addition of ETH is new and only revealed recently when the mayor discussed his plans for taking paychecks in crypto.

Looking at the Bitcoin price chart, we can see that BTC has support at $35,000, and the price has marginally pushed up, although it remains in the red. If the current sentiment persists, we could see BTC push up to $35,500 and possibly back to $36,000.