The Bitcoin price is currently in the red, as sellers look to push BTC below $57,000. BTC has been bearish since the weekend, as the price registered a marginal drop on Sunday. Monday saw the bearish sentiment continue, as the price dropped by almost 6%, slipping below $57,000 and settling at $56,335. The price pushed up on Tuesday, moving back up to $57,678, before falling back during the current session.

The Bitcoin price was quite bearish at the start of the previous week, as it dropped by 3.30% on Monday, settling at $63,736. BTC slipped below the 20-day SMA on Tuesday, as it registered a drop of over 5% and settled at $60,275. BTC could only post a marginal recovery on Wednesday before falling back into the red on Thursday, pushing below the 50-day SMA and settling at $56,952. However, BTC managed to reverse the bearish trend on Friday, as the price rose by over 2% and settled at $58,139. 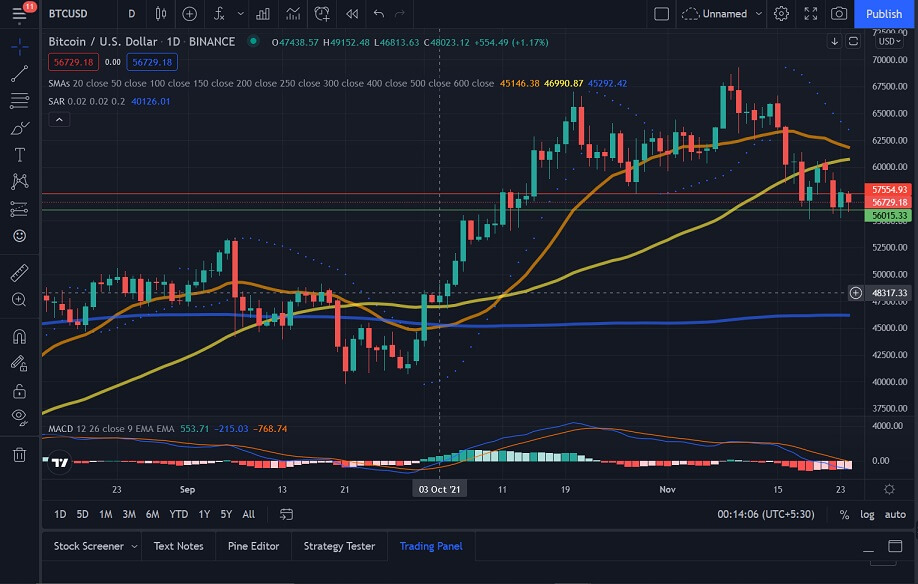 After Friday’s recovery, the Bitcoin price continued to push up on Saturday, rising by over 3% and settling at $59,914. At this level, the 50-day SMA was acting as resistance, and as a result, the price fell back on Sunday, registering a marginal drop. Monday saw BTC register a significant drop, as it fell by almost 6% and settled at $56,335 before pushing up on Tuesday and moving to $57,678. The current session sees BTC back in the red, with sellers pushing the price towards $56,500.

We can see that the MACD is currently bullish, indicating a price rise. However, if the price falls back, we could see it flip to bearish. The Indian government plans to introduce a crypto bill in the winter session of Parliament, per an official bulletin. The bulletin listed "The Cryptocurrency and Regulation of Official Digital Currency Bill, 2021" for introduction, consideration, and passing.

Lok Sabha, the lower house of India's bicameral Parliament, published the bulletin. It confirmed recent reports that said a crypto bill would be presented in the winter session of Parliament, which begins on November 29 and concludes on December 23.

The bill's description in the bulletin says it seeks "to create a facilitative framework for creation of the official digital currency to be issued by the Reserve Bank of India." The bill also "seeks to prohibit all private cryptocurrencies in India, however, it allows for certain exceptions to promote the underlying technology of cryptocurrency and its uses."

Notably, this is not the first time the Lok Sabha has mentioned this bill in its bulletin. Earlier this year, a Lok Sabha bulletin listed the same bill with the same description. That bill was expected to be introduced in February but was not tabled in Parliament. It is unclear whether these two bills are the same.

In 2019, the bill was drafted by an inter-ministerial committee under the chairmanship of Subhash Chandra Garg. It was named "Banning of Cryptocurrency & Regulation of Official Digital Currency Bill, 2019" and had recommended banning crypto in nearly all forms, including trading and holding. It was not introduced in Parliament.

The news comes a few days after India's Prime Minister Narendra Modi and several other lawmakers met to discuss the crypto space, including its opportunities and challenges.

Looking at the Bitcoin price chart, we can see that BTC has dropped during the current session. If the current sentiment persists, we could see BTC drop below $56,500.