The Bitcoin price continued to drop during the ongoing session, as BTC dropped below $40,000, with sellers pushing it down to $38,000. On Thursday, BTC had registered a sharp fall, dropping by 7.60%, dropping below the 20 and 50-bar SMAs and settling at $40,549. The price remained in the red on Friday, dropping to $40.023 before registering a marginal recovery on Saturday. The current session sees BTC below $40,000 as sellers look to push the price to $38,000. 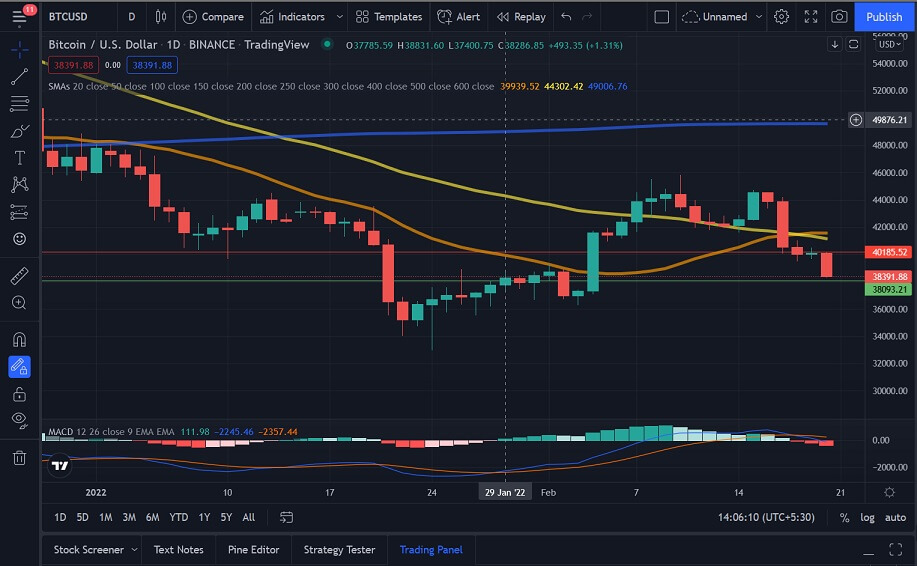 The Bitcoin price remained in the red on Thursday, as it went below the 20 and 50-bar SMAs, dropping to $40,549. Friday saw the bearish sentiment persist, as BTC dropped by 1.30%, falling to $40,023. Despite the bearish sentiment, BTC was able to register a marginal recovery on Saturday before dropping back during the ongoing session, with the price currently down by over 4%.

Looking at IntoTheBlock’s IOMAP for the Bitcoin price, we can see that BTC faces strong resistance at around $40,141. At this price level, over 724,000 addresses have sold more than 771,000 BTC. 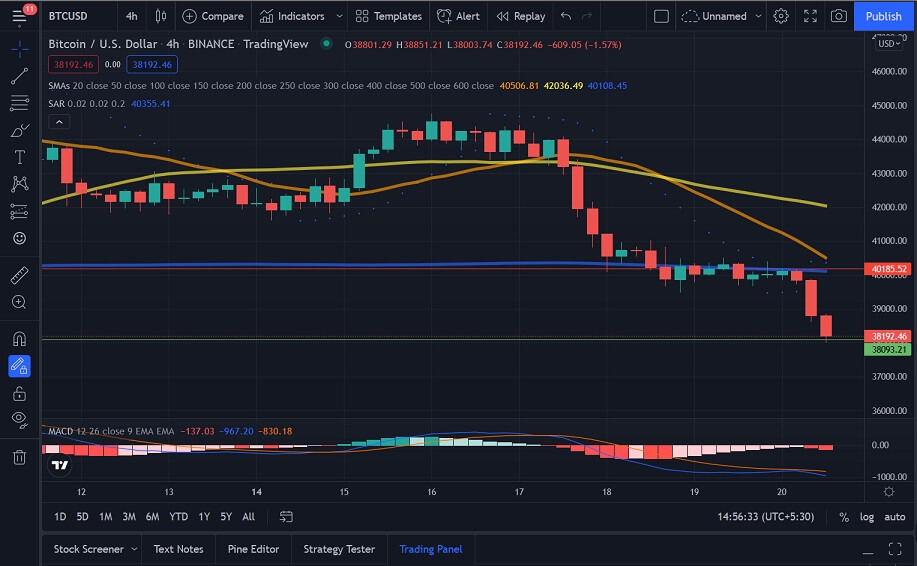 Bitcoin expert Dennis Porter and political advisor Ian C. Calderon have collaboratively drafted a new proposal that could make Bitcoin an official legal tender by their own opinion.

After Arizona and the Island of Tonga have recently hit the headlines with a possible move to make bitcoin legal tender, the California bill could disrupt the legal tender race once again. Calderon recently tweeted:

“Together, @Dennis_Porter_ and I are working on a bi-partisan effort to legislatively explore #Bitcoin as legal tender in the State of California. More to come”

Critics aren’t far, and a Twitter user replied promptly that the bill does not make #Bitcoin legal tender but would rather be a provision that potentially allows people to pay tax in crypto. This already exists in other states and would not be a big gamechanger at all, they noted.

Porter added a link to his tweet, which redirects to a petition hosted on votervoice, an advocacy tool to influence policies and educate lawmakers.

Legalizing Bitcoin as legal tender is one of the wildest things a state could do. While El Salvador is risking international trade deals, ratings, correspondent banking, and much more, it has gained unimaginable media attention and hoards of bitcoin tourists.

The blockchain data company – Chainalysis – claimed that criminal whales represent 3.7% of all cryptocurrency whales. Those bad actors collectively own over $25 billion worth of digital assets. The New York-based blockchain analysis company identified 4,068 criminal cryptocurrency whales (3.7% of all) who collectively possess more than $25 billion worth of digital assets. The firm explained that every entity owns over $1 million in crypto.

It is worth noting that most whales received either a relatively small or substantial share of their total balance from illegal addresses. 1,374 got between 10% and 25% of their assets from illegitimate wallets, while 1,361 obtained between 90% and 100%.

Additionally, Chainalysis analyzed where those criminals are located. It assigned UTC zones to the 768 whales whose wallets have enough activity to make a strong estimate. 2, 3, and 4 are the zones containing the most wrongdoers. Interestingly, this area includes Russia’s biggest cities – Moscow and Saint Petersburg. South Africa, Saudi Arabia, and Iran also fall into those time zones.

“Investigation of criminal whales represents a significant opportunity for government agencies around the world to continue their string of successful seizures and bring to justice the biggest beneficiaries of cryptocurrency-based crime.”

Not long ago, the blockchain analytics company disclosed that the total cryptocurrency value laundered in 2021 was $8.6 billion – 30% more than 2020. Bad actors transferred nearly 17% of those assets to Decentralized Finance applications, up from 2% in the year before.

Chainalysis explained that these numbers account only for funds derived from “cryptocurrency-native crime,” including Darknet market sales or ransomware attacks.

Bitcoin (BTC) to Its Balance Sheet in the Future: Wyoming Senator Lummis

Wyoming Senator Cynthia Lummis thinks the Federal Reserve should add Bitcoin (BTC) to its balance sheet once the top crypto asset becomes more regulated. Lummis spoke recently at a webinar hosted by the Orrin G. Hatch Foundation and was asked about the idea of the Fed purchasing BTC.

“I think it’s a great idea, to be honest, and I think that once there is a statutory and regulatory framework, that will make a lot of sense. The fact that it is completely decentralized is going to make it over time more ubiquitous, and I think it’s going to be something that the Fed should hold on its balance sheet.”

“You’ll see, I think, just in the coming weeks, some legislation rollout that’s really comprehensive. We began in December, sending our bill draft around for comment quietly among regulators and among people in the Bitcoin community and the digital asset community at large. We got a tremendous amount of feedback, and we’ve incorporated those early comments into a new draft that is at [legislative] council now.”

The Republican says they’ll soon either send the legislation around for a public second round of comments or file it and receive input that way.

The bill would install a self-regulatory organization between the Securities and Exchange Commission and the Commodity Futures Trading Commission that would “make some of the initial calls on whether something’s a commodity or a security,” Lummis explained.

The Federal Reserve recently announced that its senior officials were no longer allowed to hold cryptocurrencies.

More On Bitcoin: Is Bitcoin (BTC) Still A Safe Investment?

Meta Working On Deal With Brazil To Trademark Crypto

Meta is currently awaiting a final green light for an application registration deal done with Brazil and Brazilian authorities that will allow them to expand into a new market.

Meta filed a trademark registration with the Brazilian National Institute of Industrial Property (INPI) for crypto products and services related to trading, wallets, and exchanges platforms. A metacoin platform is an information technology infrastructure that enables a digital currency and its digital asset transactions. It involves a distributed ledger technology that we commonly know and refer to as a blockchain. Popular metacoin platforms include the likes of Bitcoin and Ethereum.

Meta, the world’s biggest social media platform, has filed a trademark registration with the Brazilian authorities to design, develop and provision hardware and software for various Bitcoin and crypto-related services. To sum it up, this is a “design, development and implementation of software for third-party verification services for digital currency transactions, including (but not limited to) transactions involving Bitcoin currency.”

The National Institute of Intellectual Property (IPNI) is a French administrative public institution having the task of receiving applications and granting titles of industrial property, such as brevets or patents. Meta had filed earlier in the year and has been waiting for some time now; once done, the move could open up the gates and raise awareness for crypto in Brazil.

Meta published the application for registration in recent weeks and is currently awaiting opposition before INPI approval. According to the filing, Meta’s initial trademark filing happened on October 5 last year.

Looking at the Bitcoin price chart, we can see that BTC has been extremely bearish in recent sessions and is down by almost 5% during the current session. If the current sentiment persists, we could see BTC drop to $38,000.

What Might Happen If You Invest $100 In Bitcoin Today?