Bitcoin Price Prediction: BTC Tanks After Russian Airstrikes On Ukraine, Could Drop Below $35,000

The Bitcoin price is down by almost 5% during the current session, as world events crippled markets. BTC had started the week in the red, dropping by 3.46% on Monday, falling to $3705. BTC recovered on Tuesday, rising by just over 3%, moving to $38,262, before dropping back on Wednesday, falling by almost 3% to $37,263. The current session sees BTC at $35,500, as sellers look to push the price lower.

The Bitcoin price started the previous week on a fairly positive note, rising by just over 1% on Monday and then pushing up by almost 5% on Tuesday and moving to $44,536. On Wednesday, the price fell back, dropping by 1.46%, and then crashed by almost 8% on Thursday, slipping below the 20 and 50-day SMAs and settling at $40,549. Friday saw BTC remain in the red, dropping to $40,023. 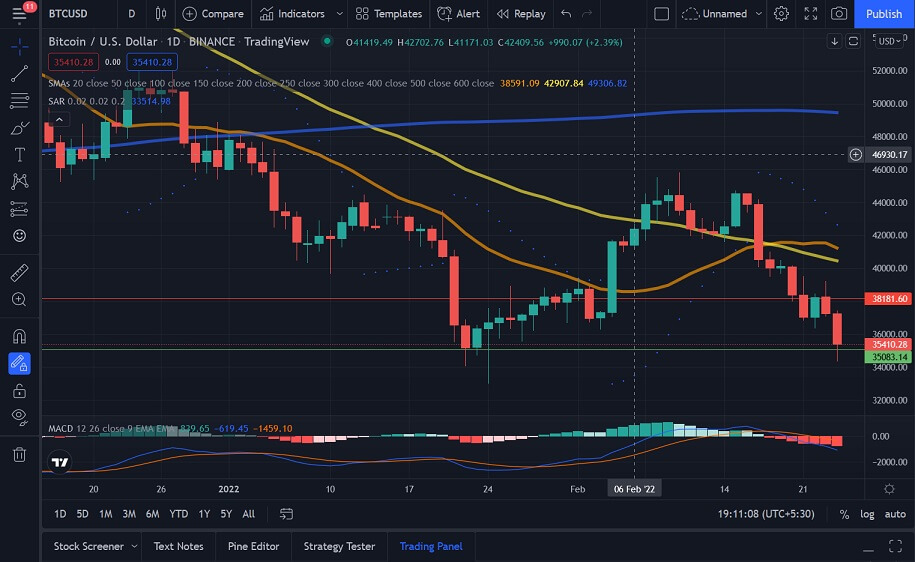 Despite the bearish sentiment, the Bitcoin price registered a marginal recovery on Saturday, rising by 0.25%, before dropping back on Sunday, falling by over 4% and ending the weekend at $38,382. Monday saw the bearish sentiment persist, as BTC dropped to $37,054 before recovering on Tuesday and moving to $38,262. However, BTC was back in the red on Wednesday, dropping by 2.61%, falling to $37,263, and falling further during the ongoing session. We can see that the MACD is currently bearish, indicating that we could see the price drop further.

Looking at IntoTheBlock’s IOMAP for the Bitcoin price, we can see that BTC faces strong resistance at around $38,195. At this price level, over 1.1 million addresses have sold more than 1 million BTC.

We can see that the RSI indicates BTC has nearly pushed below the neutral zone, indicating a recovery in the short term.

More On Bitcoin: Is Bitcoin (BTC) Still A Safe Investment? 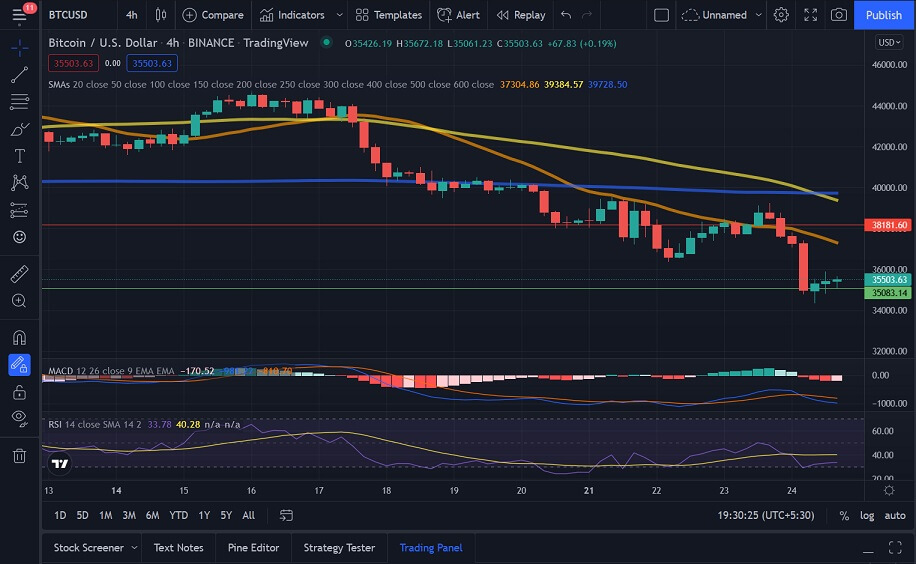 Indira Kempis, Mexican Senator from the state of Nuevo León, recently had an interview with the Diario El Salvador discussing the impact Bitcoin has had in the country, and the inevitable benefits Bitcoin has to offer the people of Mexico.

During the interview, Diario asked Kempis how her recent visit to El Salvador affected her perspective on Bitcoin’s capacity to revolutionize a nation within the context of a Bitcoin ecosystem. Kempis stated"

“El Salvador is undoubtedly becoming the most important hub or laboratory in the world about the future with bitcoin. It is clear to me that financial exclusion is one of the public problems that few of us have addressed with feasible alternatives, and that this type of technology is allowing us to generate an alternative, a way, a solution so that millions of people can be included in the financial system.”

Continuing in their conversation, Kempis shared her approach to legislation when asked about Kempis’s desire to accept bitcoin as legal tender in Mexico. To be specific, they asked if El Salvador inspired this decision.

“Yes, because I have a premise when making my initiatives and that is: laws to anticipate the future, not just to solve the past.”

She then explained the need for legislative action and the price of inaction:

“If we need Bitcoin in Mexico to be a legal tender, because otherwise, if you do not make that decision as El Salvador made it, it is very difficult to specify actions.”

Is Bitcoin (BTC) a Good Buy?