The Bitcoin price looks set to push above $38,000, as market watchers hope BTC can maintain a sustained recovery. BTC had ended the weekend on a positive note, registering an increase of over 3% on Sunday and ending the weekend at $36,347. On Monday, BTC remained in the green, registering an increase of 1.04% and moving to $36,725, and then pushing up to $37,006 on Wednesday after an increase of 0.765. The current session sees BTC up by nearly 3%, as buyers look to push the price above $38,000.

The Bitcoin price started the previous week on a fairly bearish note, dropping by nearly 2% on Monday and settling at $42,287. BTC was able to register a marginal recovery on Tuesday but fell back in the red on Wednesday, as it recorded a drop of 1.62% and settled at $41,719. Thursday saw BTC drop further, as sellers drove the price down by 2.36% to $40,735. BTC registered a significant drop on Friday, falling by over 10%, as it slipped below the $40,000 level and settled at $36,551. 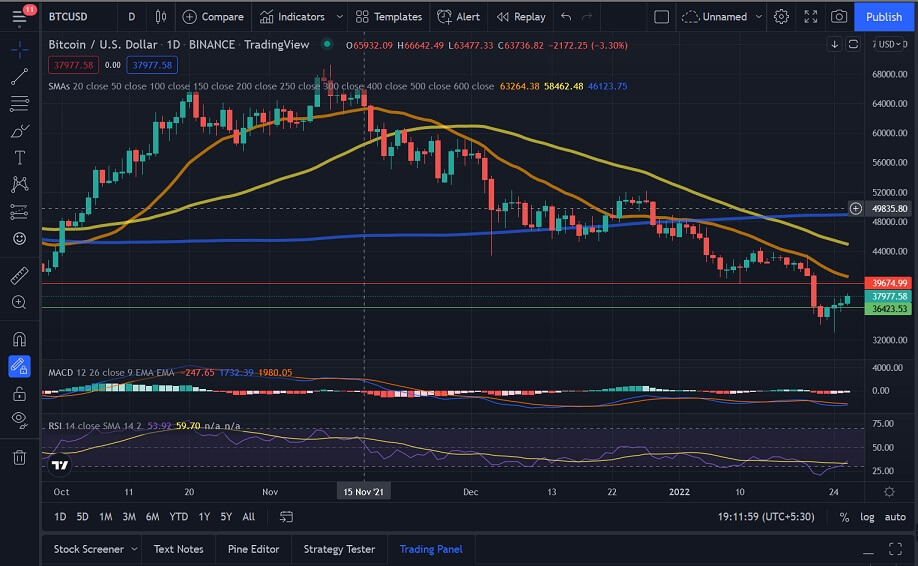 The Bitcoin price continued to remain bearish on Saturday, registering a drop of nearly 4% and settling at $35,198. However, Sunday saw BTC reverse the prevailing bearish trend, as the price rose by 3.27% and settled at $36,347. The current week started with the bullish sentiment persisting, as BTC rose by 1.04% on Monday and then by 0.76% on Tuesday to settle at $37,006. The current session sees BTC just above $38,000 as buyers look to push BTC towards $39,000.

We can see that the RSI had slipped below the neutral zone, which prompted BTC’s recovery on Sunday. Market watchers will be hopeful that BTC could push further and post a sustained recovery. 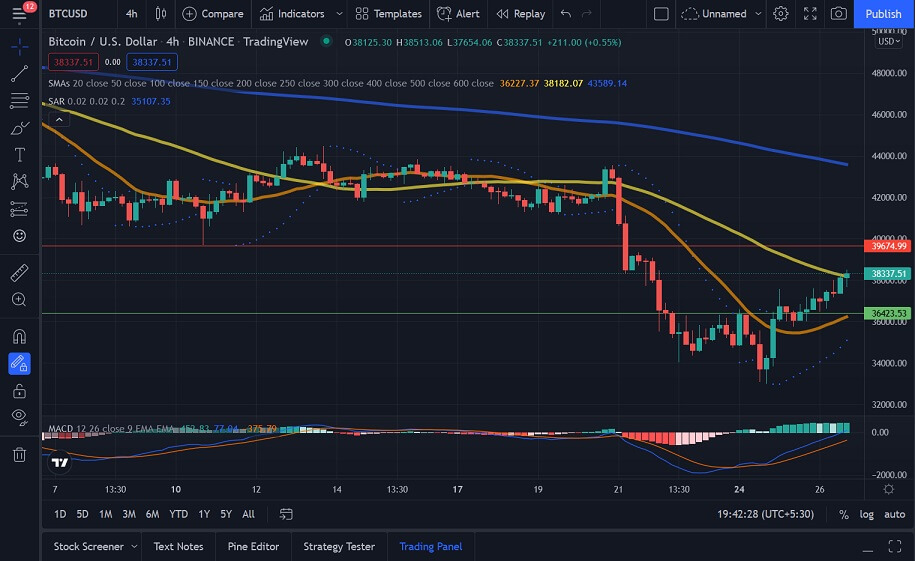 Mark Webber, a quantum physicist at the University of Sussex, recently said that breaking Bitcoin’s encryption would be possible with futuristic supercomputers. For now, the flagship cryptocurrency is perfectly safe. Existing devices are far from achieving the size required to hack Bitcoin.

Webber and his colleague reportedly estimated that a quantum computer would need to have at least 13 million qubits to break Bitcoin’s encryption in a day.

Notably, the researchers believe that 300 million qubits would be “achievable” for quantum computers in the future, which will pose a threat to the largest cryptocurrency.

"Our estimated requirement of 30 [million] to 300 million physical qubits suggests Bitcoin should be considered safe from a quantum attack for now, but devices of this size are generally considered achievable, and future advancements may bring the requirements down further."

Webber believes that Bitcoin could potentially perform a hard fork to become quantum-resistant and fix its supercomputer problem in the future, but he also warns of network scaling issues.

The doctoral researcher is convinced that the existing encryption techniques are not secure enough:

"People are already worried because you can save encrypted messages right now and decrypt them in the future."

Russia appears to be softening its stance toward crypto. Ivan Chebeskov, a director within the Ministry of Finance, recently advocated regulating crypto rather than banning it.

His support is a response to the Russian central bank proposing a blanket ban on crypto mining and trading. According to Chebeskov, banning crypto operations and mining will lead to the country lagging behind the tech industry. The minister instead suggested regulating digital assets.

​​“We need to give these technologies the opportunity to develop. In this regard, the Ministry of Finance is actively involved in the development of legislative initiatives in terms of regulating this market.”

The comments were made during the recent RBC crypto conference. Chebeskov said that the Russian ministry has prepared a proposal to regulate digital assets and is waiting to hear the government’s position on the matter.

Before working at the Kremlin, Chebeskov enjoyed a productive career employed at Russian and European investment banks. He was a student at the pro-Bitcoin state of Texas. He has spoken out in favor of digital currencies in the past.

In his view, a digital rouble could compete with China’s CBDC. China’s central bank released a pilot version of a digital yuan wallet in early January. Elsewhere, the private sector has rebuked the proposal, which would ban the issuance, exchange, and circulation of crypto in Russia.

Telegram CEO Pavel Durov, for example, wrote that the proposed ban on crypto would “destroy a number of sectors of the high-tech economy” in a post on his messaging application Telegram.

Looking at the Bitcoin price chart, we can see that BTC has been fairly positive since Sunday and has registered a significant increase during the ongoing session. If the current bullish sentiment persists, we could see BTC push to $39,000.