The Bitcoin price fell back marginally during the ongoing session, as BTC was unable to move past the 20-day SMA. Since the weekend, BTC has been quite bullish and pushed up by 1.31% on Saturday, before dropping by 0.89% on Sunday and ending the weekend at $37,944. The price recovered on Monday, rising by 1.42% and then by 0.72% on Tuesday, moving to $38,760, where the 20-day SMA acted as resistance. As a result, the price fell back, dropping marginally during the ongoing session.

The Bitcoin price started the previous weekend with a significant drop, falling by nearly 4% on Saturday. BTC recovered on Sunday, rising by 3.27% and ending the weekend at $36,347. BTC continued to push higher on Monday, rising by over 1% and then registering an increase of 0.77% on Tuesday and moving to $37,006. The price fell back on Wednesday, registering a marginal drop, before recovering on Thursday, rising by 0.86% and settling at $37,197. Friday saw BTC remain in the green, as the price rose by 1.60% and moved to $37,793. 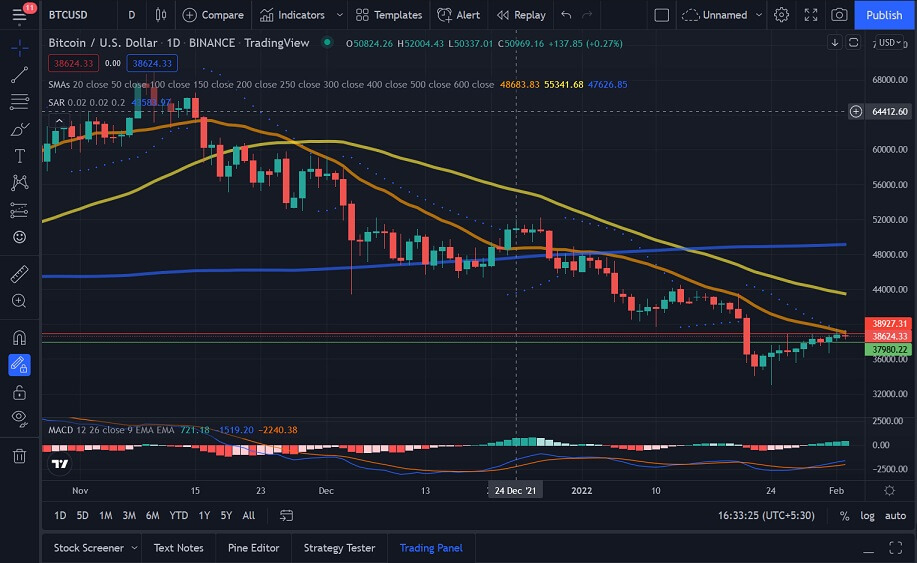 Looking at IntoTheBlock’s IOMAP for the Bitcoin price, we can see that BTC has strong support at around $37,935. At this price level, over 1 million addresses have bought more than 748,000 BTC. 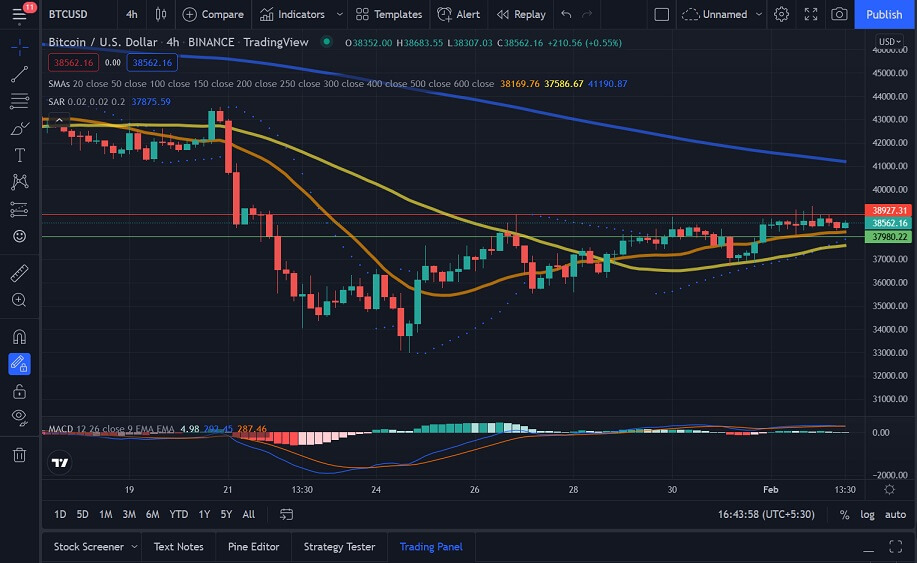 Russians currently own 16.5 trillion rubles ($214 billion) in crypto, per recent government figures. According to Bloomberg, Russians own around 12% of worldwide cryptocurrency holdings. According to two sources close to the Kremlin, experts established the crypto holdings estimates by studying the IP addresses of some of the country’s most prominent crypto exchange users and a few other data points.

The analysis of Russians’ crypto holdings was carried out to have a better understanding of the crypto market and to draft new rules. Russians held roughly 5 trillion rubles worth of cryptocurrency in December 2021, according to TASS news services.

The recent estimate of crypto holdings is a significant increase over the statistics shared by Anatoly Aksakov (the head of the lower house’s financial markets committee) in December. Russians held 5 trillion rubles worth of digital assets in December 2021, according to a Tass report.

The estimates come as Russia tries to regulate the crypto sector. Over the last few days, there have been mixed reactions to the Central Bank's attempt to ban crypto in the country, with the former president, Dmitry Medvedev saying a ban will only cause more harm than good.

The Russian Central Bank had recently placed a ban on cryptocurrency, but this has since changed. The Russian government has begun the process of putting together a plan for implementing cryptocurrency limitations.

The Central Bank believes cryptocurrencies should be governed by a regulatory and restricted framework. This shift in approach came after Putin pushed on reaching an agreement on the issue. He recognized that, while Bitcoin involves some risk due to its volatility, crypto mining provides a competitive advantage to the country.

Jack Dorsey: Diem Was A Waste Of Time, Meta Should’ve Focused On BTC

Twitter founder Jack Dorsey said that Meta’s failed cryptocurrency project, Diem, was “wasted effort and time” and that it should have focused its efforts on “making Bitcoin more accessible for everyone.” MicroStrategy CEO Michael Saylor interviewed Dorsey at his company’s recent Bitcoin for Corporations 2022 conference about how corporations could integrate and use Bitcoin.

Dorsey said that although Facebook probably started Diem for “the right reasons,” it should’ve used an open-ended protocol like Bitcoin rather than attempting to create its own currency. Dorsey told Saylor:

“This whole thing with Libra and then Diem, I think there’s a ton of lessons there. Hopefully, they learned a lot, but I think there was a lot of wasted effort and time.”

His criticism of Twitter’s more popular and successful social media counterpart should perhaps come as no surprise. Since stepping down from his role as Twitter CEO in November last year, Dorsey has since made it clear that he plans to make Bitcoin the focus of his new company, Block (formerly known as Square). Block allows users to purchase Bitcoin through the mobile payments service Cash App.

“Those two or three years or however long it’s been could’ve been spent making Bitcoin more accessible for more people around the world.”

Dorsey added that making BTC more accessible would benefit many of Meta’s products, referring to Facebook Messenger, Instagram, and WhatsApp.

El Salvador, the first country to adopt Bitcoin as a legal tender, has relaunched its in-house Chivo wallet to address the existing challenges of BTC transfers locally. With AlphaPoint integration, the updated Chivo wallet is expected to carry out instantaneous low-fee Bitcoin transactions while fixing concerns related to stability and scalability.

Within the first month of establishing BTC as a legal tender, President Nayib Bukele announced that Chivo wallet onboarded 2.1 million Salvadorans, which by the end of the year amasses 75% of the population. However, the mass adoption met with numerous roadblocks, including system issues and missing funds.

According to the official statement, Chivo intends to expand its current consumer-faced use cases to other day-to-day transactions such as simplifying payments of home utilities, taxes, and many other daily transactions in Bitcoin:

“The project has aspirations to Chivo is also in the process of deploying 1,500 Bitcoin ATMs around the country to more readily serve the Salvadoran population.”

“El Salvador and President Bukele are truly leading globally with this first major experiment in Bitcoin adoption at a country-wide level. We are honored to be involved in the process and provide the scalable and reliable solutions needed for this massive undertaking.”