The Bitcoin price fell back during the current session, with BTC down almost 1% as sellers continue to dominate the market. BTC has been bearish since Sunday, although the price had registered a marginal increase on Friday. Saturday saw a marginal increase before the price fell back on Sunday, dropping by 0.35%. BTC remained in the red on Monday as well, dropping almost 3% and settling at $41,836 before dropping back during the current session. 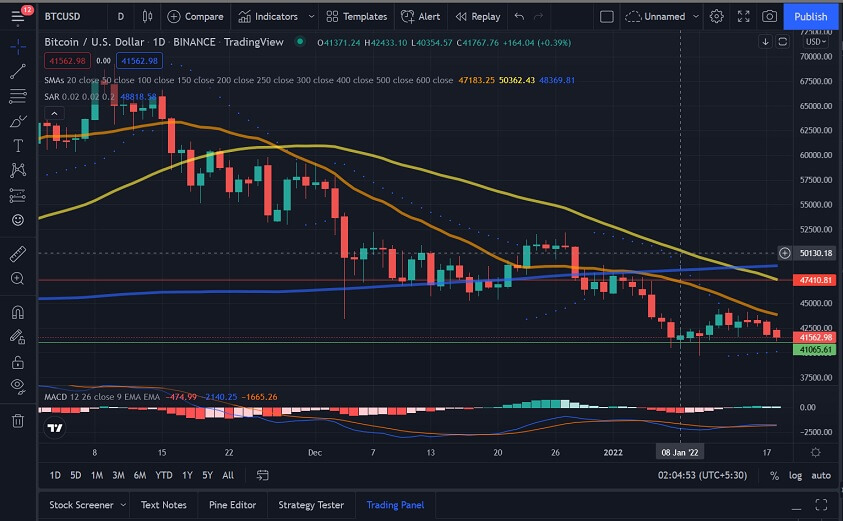 After dropping to $42,843 on Thursday, the Bitcoin price registered a marginal increase on Friday, rising by 0.69%. BTC registered a marginal increase on Saturday before dropping back on Sunday, registering a drop of 0.35% and settling at $43.013. The bearish sentiment persisted on Monday as BTC started the week in the red, dropping by almost 3% to $41,836. The current session sees BTC dropping towards $41,500, with the price down by nearly 1%.

While the MACD is currently bullish, we could see it flip to bearish if the price continues to drop.

Looking at IntoTheBlock’s IOMAP for the Bitcoin price, we can see that BTC faces strong resistance at around $47,184. At this price level, nearly 1.5 million addresses have sold more than 800,000 BTC.

Long-time crypto supporter and Bitcoin bull Max Keiser recently predicted that BTC would reach $220,000 before the end of the year. Speaking in an interview with Stansberry Research’s Daniela Cambone, Keiser gave the reasoning for his bullish price prediction, including a justification for why Bitcoin failed to reach six figures in 2021.

Keiser argued that the $220K price point was based upon a typical four-year cycle for Bitcoin. He noted that a number of factors prevented BTC from reaching his bullish mark last year, including the massive collapse in Chinese crypto mining and hashing power.

According to Kesier, mining and hash power for Bitcoin fell 50% last year and has only recently recovered. Keiser pointed to Bitcoin’s hash rate approaching another all-time high as a particularly bullish signal, justifying his prediction for BTC to reach $220K this year.

As reported by The Daily Hodl, he said:

Keiser also pointed to weakening fiat currencies as a catalyst for Bitcoin’s price increase. He predicted that Bitcoin would eclipse the market capitalization for gold, making it the definitive store of value asset.

"If you listen to guys like Bill Miller or Paul Tudor Jones, or any of the other major hedge funds out there, they’re now openly saying that Bitcoin competes with gold. It’s going to get a market share of gold."

Bitcoin Predicted To Plunge Below $30,000 By Invesco

Invesco strategist Paul Jackson has warned that the Bitcoin price could drop below the $30,000 level, Business Insider reports. He sees a decent 30% chance of such a bearish scenario translating into reality.

The exuberance in the crypto market reminds Jackson of the period on the cusp of the Great Depression. He said:

"The mass marketing of bitcoin reminds us of the activity of stockbrokers in the run-up to the 1929 crash."

The hawkish pivot made the US Federal Reserve is one of the key headwinds for Bitcoin at the moment. The central bank is expected to hike rates three times throughout this year, exerting pressure on risk assets such as stocks and cryptocurrencies.

On the technical side, BTC recently formed a “death cross.” The much-feared chart pattern, which is supposed to foretell a significant correction, often tends to be a lagging trader, with some traders seeing it as a buying opportunity.

Despite some bearish narratives, there’s no shortage of bullish price predictions. Fundstrat’s Tom Lee, for instance, believes that Bitcoin could topple $200,000 as soon as this year. The cryptocurrency’s hash rate keeps hitting record highs, signaling that miners keep investing more into the network. This, according to BTC bull Max Keiser, could propel Bitcoin to as high as $220,000 this year.

Keiser called the demand for Bitcoin “virtually infinite,” in light of fiat’s inflationary trend, which would continue to drive interest towards Bitcoin. He also mentioned that all the fundamentals of Bitcoin remain “very strong.”

Looking at the Bitcoin price chart, we can see that BTC has been quite bearish since the weekend. However, BTC has some support at $41,000, and the price has posted a marginal recovery, and we could see BTC push to $42,000.