Bitcoin Price Prediction: BTC’s Gains Evaporate As It Crashes Back Below $40,000

The Bitcoin price is down by over 1% during the ongoing session, as sellers pushed BTC below the $38,000 level. BTC has been bearish all weekend after dropping by nearly 8% on Friday and settling at $39,183. On Saturday, the price recovered marginally, pushing up by 0.64% but fell back in the red on Sunday, falling by nearly 3% and settling at $38,417. The current session sees BTC continue to drop, with the price presently at $37,896.

The Bitcoin price went into the previous weekend on a fairly positive note, rising by 2.51% on Saturday. However, BTC fell back into the red over the weekend, registering a marginal drop on Saturday and then dropping by nearly 4% on Sunday, ending the weekend at $37,741. Despite the bearish weekend, BTC surged on Monday, rising by over 14%, moving above the 20 and 50-day SMAs and settling at $43,171. On Tuesday, the price continued to push higher, rising to $44,469 before dropping back on Wednesday, falling by 1.28% and settling at $43,898. 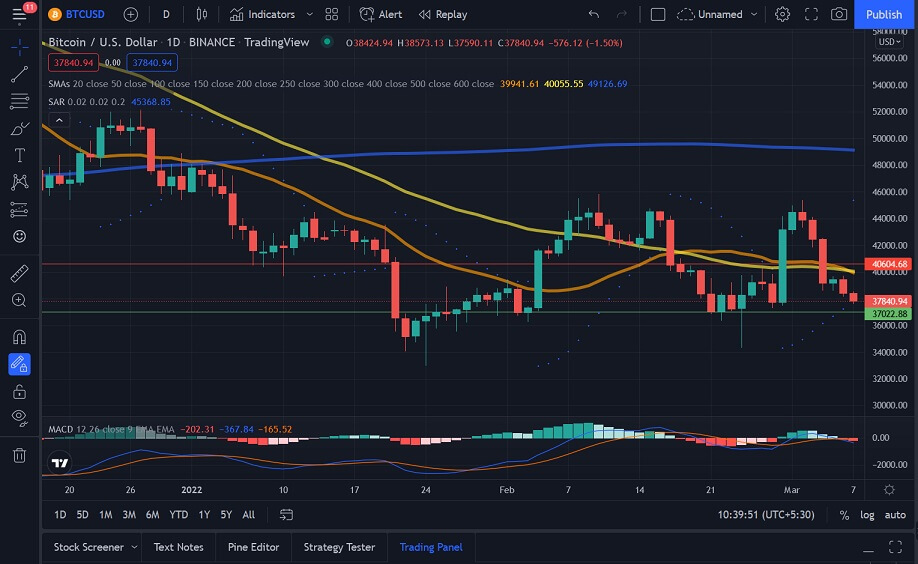 The Bitcoin price continued to drop on Thursday, as it fell by over 3%, settling at $42,471. Friday saw the price continue to drop, as BTC fell by nearly 8%, slipping below the 20 and 50-day SMAs and settling at $39,183. Despite the overwhelmingly bearish sentiment, BTC recovered on Saturday, registering a marginal increase before dropping back on Sunday, ending the weekend at $38,417. The current session sees BTC continue to drop, with the price having slipped below $38,000.

We can see that the Parabolic SAR and MACD have just flipped to bearish, indicating that we could see the price drop further.

More On Bitcoin: Pros and Cons of Investing in Bitcoin (BTC)

We can see that the MACD and Parabolic SAR are bearish, indicating that we could see the price drop further. 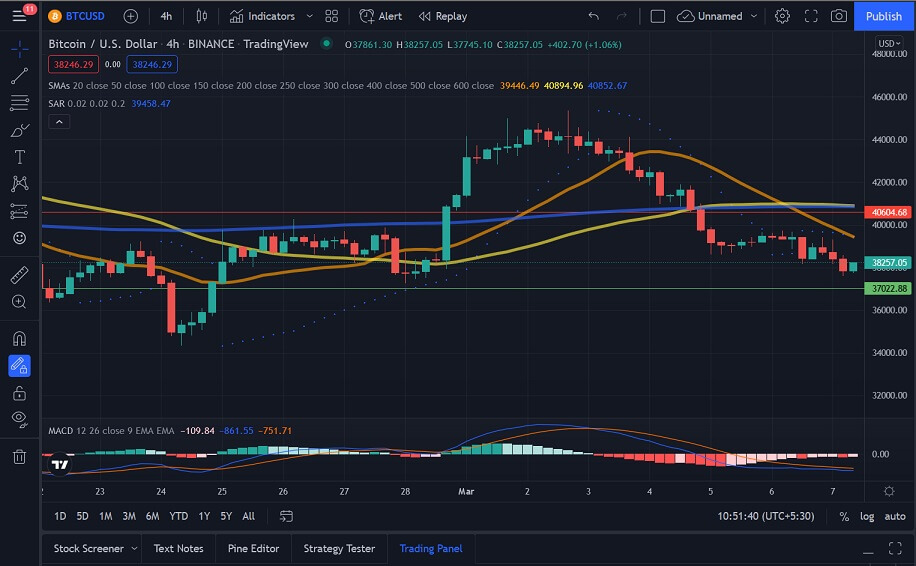 Nigel Green, CEO of financial consultancy deVere Group, has revealed he believes the price of Bitcoin (BTC) could move toward the $50,000 mark by the end of March over the ongoing war between Ukraine and Russia.

According to ETF Trends, commenting on BTC’s current price momentum Green revealed he believes the cryptocurrency’s price should keep rising, even as other risk assets like equities are moving down over the economic impact of the conflict. Green said:

"As it currently stands, I can see no reason why this price momentum should falter. I think we can expect to see Bitcoin hit $50,000 by the end of this month."

Green added that he believes it us “still too early to say whether it will then go on to reach the all-time highs of $68,000 from November 2021.” To the analyst, the conflict between Russia and Ukraine has caused “significant financial upheaval” that has seen government agencies, individuals, and businesses look for alternatives to the traditional financial system.

The CEO added that as ATMs run out of money and banks close, there are threats of people’s savings taken to pay for the war. Moreover, the international payments system SWIFT is being weaponized, making the case for a “viable, decentralized, borderless, tamper-proof, unconfiscatable monetary system,” implying he was referring to BTC.

"As more and more institutional investors take control of the sector, credibility increases, trading volumes go up and volatility goes down – this is all good news for everyday investors."

Notably, the CEO earlier said he believes the value of ETH will overtake Bitcoin “within five years” as he sees ETH having more utility and demand for it.

LocalBitcoin Exempted All Fees For Crypto Donations To Ukraine

To voice solidarity with Ukraine, the famous peer-to-peer trading platform LocalBitcoin has exempted all fees on donated Bitcoins to Ukraine. As a result, the residents of Ukraine can now cash out their Bitcoins in local currency with no fees.

LocalBitcoin published the announcement via a tweet introducing a free Bitcoin wallet “for all Ukrainians in Ukraine & abroad,” which exempts additional fees on Bitcoin transfers. Removing fees on its platform is part of its help to Ukrainian citizens besieged by the Russian army.

LocalBitcoin added that its “core value is freedom.” Consequently, the LocalBitcoin removes fees on Bitcoin transfers to Ukranian Wallets alongside the removal of conversion fees for Bitcoins cashed out in Ukraine’s currency, Hryvnia.

The use of cryptocurrencies in Ukraine has risen since the conflict between Russia and Ukraine started. Similarly, Ukraine has surpassed $20 million in donations sent via cryptocurrencies. The government of Ukraine also officially launched crypto wallets aimed at receiving donations from abroad.

Ukraine NFTs have also become popular. Trading platform Ikonia has recently launched an NFTs sale to raise funds for charity in which 10% of the royalty fee will be donated to charity when each NFT is sold. Over 43 million NFTs editions are listed aimed at gathering $432,875,120.

As the West has been banning Russia at international levels over its Ukraine invasion, the Vice President of Ukraine also requested cryptocurrency exchanges to ban Russian wallet addresses. In response, few urged it’s not so simple as while some tech giants like Google and Meta has already restricted them to some extent.

British fintech firm Revolut has blocked payments to Russia and Belarus, joining a string of fintech firms pulling out of the region. The neobank stopped supporting money transfers on March 4, according to a person familiar with the matter.

At the same time, users can no longer top up their Revolut accounts using cards issued by financial institutions in Russia or Belarus. The news comes amid sweeping economic sanctions against Russia following its invasion of Ukraine, which began on February 24, with fintech firms adding to the pressure.

Earlier this week, remittance firm Wise suspended its services in Russia. Shortly after, Zepz, TransferGo, and Remitly took similar actions. Revolut offers a range of payment, investment, and money management services through a mobile app. The startup became the most valuable private tech company in UK history when it raised $800 million in July last year.

The conflict in Ukraine is deeply personal for Revolut’s co-founders, Nikolay Storonsky and Vlad Yatsenko, born in Russia and Ukraine, respectively. They both also hold British citizenship.

On March 1, Storonsky issued a statement condemning the war and calling it “wrong and totally abhorrent.” Revolut has more than 2,150 staff based in both Russia and Ukraine, and Storonsky said that he had to consider the wellbeing of those in Russia before making any statement on the conflict.

“They have done nothing wrong; they have simply helped build Revolut, supporting their own families through their hard work, just like their colleagues in Ukraine (or London or New York or Sydney or Mumbai, or anywhere else in the world where our people are based). I was, and remain, mindful of them in all of my actions.”

Looking at the Bitcoin price chart, we can see that BTC has been extremely bearish in recent sessions, having seen all its recent gains wiped out. If the current sentiment persists, we could see BTC drop towards $37,000. However, BTC has clawed back significantly and pushed back above $38,000. If BTC can continue to recover, we could see the price test the $40,000 levels again.

Investing in Bitcoin - 5 Reasons to Invest in BTC in 2022

How Many Bitcoins Are Left?

Why Is Bitcoin (BTC) So Cheap?