The Bitcoin price is marginally up during the ongoing session, after an extremely bearish few sessions. BTC had started the weekend on a bearish note, dropping by 2.55% on Friday, falling to $42,410. The weekend saw BTC remain in the red, dropping by 0.36% on Saturday and Sunday to end the weekend at $42,106. The current session sees BTC at $42,447 as the price looks to push higher.

The Bitcoin price started the previous weekend on an extremely bullish note, rising by over 11% on Friday and pushing above the 20-day SMA. The price fell back marginally on Saturday before recovering on Sunday and ending the weekend up by over 2% at $42,409. BTC remained bullish on Monday, rising above the 50-day SMA and moving to $43,886, and then pushed up to $44,116 after registering a marginal increase on Tuesday. BTC continued to push higher on Wednesday, registering a marginal increase and moving to $44,437. After pushing up to $44,437, the Bitcoin price fell back significantly on Thursday, falling by just over 2% and dropping to $43,519. BTC remained bearish on Friday, dropping by 2.55% and falling to $42,410. The weekend was no different as BTC registered marginal drops on Saturday and Sunday to end the weekend at $42,106. The current session has seen a marginal recovery as buyers and sellers look to establish control.

We can see that the MACD is currently bullish, indicating that we could see the price push higher. However, if the price drops, we could see it flip to bearish.

Looking at IntoTheBlock’s IOMAP for the Bitcoin price, we can see that BTC faces strong resistance at around $48,032. At this price level, over 2 million addresses have sold more than 847,000 BTC. 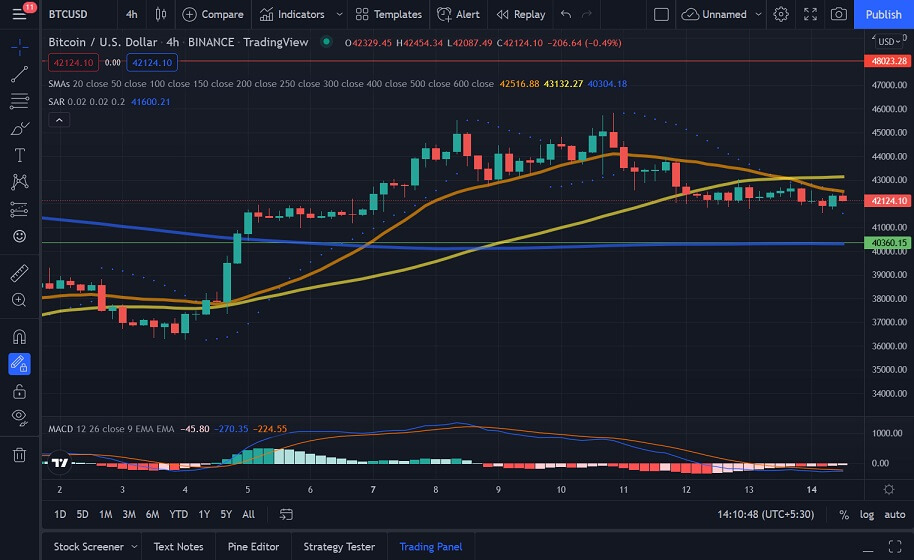 Member of the Canadian House of Commons, Michelle Rempel Garner, proposed Bill C-249 to encourage growth in the cryptocurrency industry in Canada. The bill would require members of parliament to interface with industry leaders to create suitable regulations.

“This enactment requires the Minister of Finance to develop a national framework to encourage the growth of the crypto asset sector and, in developing the framework, to consult with persons working in the sector who are designated by provinces and territories. The enactment also provides for reporting requirements in relation to the framework.”

Miss Garner was a student of economics and has been a member of the House for over a decade. At the end of last year, the legislator took to Twitter to ask for suggestions on what the government could do to better the industry. She believes that for the country to be well-positioned in the crypto space, the opinions of industry leaders must be considered.

The policy so far has been received positively by many actors. Hut8, one of the largest miners of digital assets on the continent, has celebrated the move. CEO of Hut8, Jaime Leverton, expressed optimism about the trajectory of the industry in Canada, saying:

“Decision makers are increasingly aware of the incredible opportunities for growth and job creation within our sector and recognize the value in working with industry leaders to make Canada the destination for 21st-century innovators.”

A mysterious Bitcoin whale recently created a wallet and deposited a whopping 44,612 BTC worth an estimated $1.89 Billion. The crypto community soon discussed who could have carried out such an enormous transaction. Some netizens have even joked at how the entity just sent the huge stash without flinching.

“Didn’t even send a test transaction. The balls on this whale is something to behold.”

While some have argued that this is not a new whale, there are those like Chinese Journalist ‘Wu Blockchain’ who have pointed the action to an institution or Crypto exchange conducting routine Bitcoin storage. Others believe that the transaction may be part of last week’s recovery by the Department of Justice of 94,636 Bitcoin from a manhattan couple alleged to be behind the infamous 2016 Bitfinex hack that left 119,754 coins missing.

Although this has been the first transaction involving the wallet, a deeper look into the address activity sheds more light on yesterday’s transactions. As per data provided by Blockchain.com, the Bitcoin originated from another address previously containing 45,412.48. The whale seems to have created a new wallet or already had an old but unused one, which he used to transfer the 44,612 BTC while spending the rest (800BTC).

“It is probably not what people think. Judging from the transaction details, it is most likely a change address. That is an address that belongs to the original owner, but never in use before.”

Despite Bitcoin and the equities market starting the year on a choppy note, the cryptocurrency has demonstrated its growing dominance by outperforming major tech stocks. Bitcoin recently outperformed the top six tech stocks by an average return on investment (ROI) of 12.24%, data from Finbold’s ROI tool indicates.

The returns are a potential indicator that Bitcoin might be on course to retain its status as one of the best-performing assets in recent months. Last year, Bitcoin emerged as the leading investment product with returns of about 60%.

Despite Bitcoin registering a higher ROI than tech stocks, the two investment products have moved in tandem. The correlation potentially points to the impact of interest rates and inflation concerns that have affected stocks and the crypto market.

Worth mentioning is that Bitcoin and the tech stocks belong to different asset classes. The companies are for-profit businesses with tangible products and services, while Bitcoin is a virtual asset.

With volatility affecting both asset classes, the stock market has continued to stare at possible corrections. The potential correction emanates from the Federal Reserve tapering measures and the expected interest hike.

If Bitcoin can sustain the gains in the coming months, the move will solidify the asset’s status as a maturing investment vehicle. The maturity will also be aided by the continued entry of institutional investors into the space.