The Bitcoin price fell back during the current sentiment, as sellers look to push BTC below $44,000. BTC had ended the weekend in the red, dropping marginally on Sunday. However, the price recovered on Monday, rising by 1.08% and moving to $42,561. BTC remained bullish on Tuesday, as the price rose by nearly 5% and settled at $44,536 before dropping back during the ongoing session.

The Bitcoin price started the previous weekend in the red, dropping by 0.49% on Saturday before recovering on Sunday, rising by over 2% and settling at $42,409. BTC continued to push higher on Monday, as it pushed above the 50-day SMA and rose to $43,887. On Tuesday and Wednesday, the price remained bullish, rising by 0.52% and 0.72%, respectively, and moving to $44,434. Despite the bullish sentiment, BTC fell back on Thursday, falling over 2% and settling at $43,519. 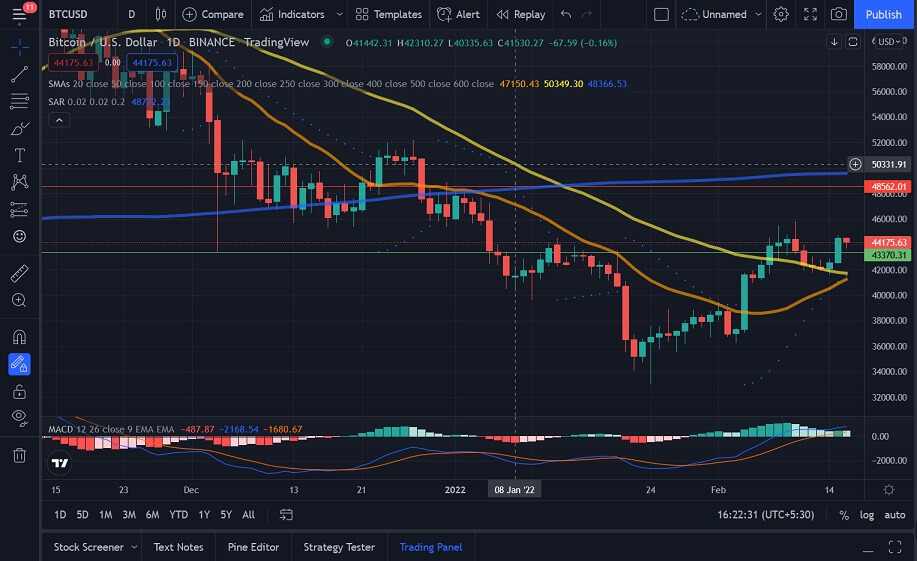 Looking at IntoTheBlock’s IOMAP for the Bitcoin price, we can see that BTC faces strong resistance at around $48,550. At this price level, over 2.2 million addresses have sold more than 1.1 million BTC.

We can see that the MACD is bullish, indicating that we could see the price push higher. 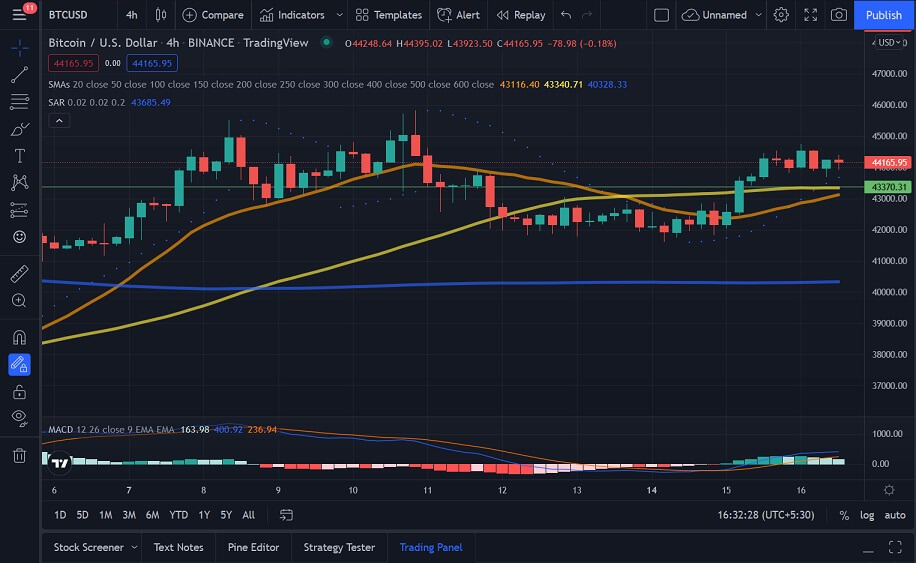 The managing partner of investment research firm Fundstrat Global Advisors, Tom Lee, is singling out a category of investors whose involvement could send Bitcoin (BTC) to a six-figure price. Lee said in a CNBC interview that baby boomers are not investing in Bitcoin, but their involvement may trigger a rally that would increase the flagship crypto asset’s price to over $200,000.

“If I had to say what’s the simplest way for a big step function to happen in crypto, it’s really getting existing generations of investors in the US, not new investors, to actually be willing to allocate to Bitcoin. And 76% of all the wealth in America is controlled by people over age 65. So that’s nearly $100 trillion held by people that think Bitcoin is still kind of a hobby or things that people who live in the basement play with.

I think regulation could actually unlock a lot of that movement. Just imagine 2% out of $100 trillion allocated to crypto. You could see a five to 10, 15 times increase in total network value.”

In December of 2021, Lee predicted that Bitcoin would hit $200,000 in 2022. The Fundstrat Global Advisors’ managing partner also says that some of the biggest risks to cryptocurrencies include the development of technology that could compromise classical cryptographic algorithms used to keep the Bitcoin network secure.

“I think the biggest downside for crypto will actually be a vulnerability exposed in Bitcoin because it is the most important blockchain and the one with the most value stored on it."

He added two things that could happen.

"One is if the cost of energy globally fell to zero because if you don’t have to spend money to protect a security network, then it means someone can launch a 51% attack. The second is that cryptographic hash becomes exposed. Meaning someone finds a way to actually, whether it is quantum [computers], to essentially defeat the proof-of-work concept itself. So I’d say those are the biggest downside risk.”

US Congressman Warren Davidson recently introduced the “Keep Your Coins Act” to protect private bitcoin and crypto usage in his country. Specifically, it prohibits Federal Agencies from interfering with the right to self-custody and to transact P2P. It restricts their ability to ban “self-hosted” cryptocurrency wallets.

In Canada, the government reduced the legitimacy of all crowdfunding platforms by prohibiting them to give to the Canadian truckers the money people donated. X Strategies’ Greg Price said:

“Canada’s Deputy Prime Minister says, under the Emergencies Act, banks can immediately freeze or suspend bank accounts without a court order and be protected from civil liability.“

To that, Warren Davidson responded:

“Our office will be introducing legislation in the US House of Representatives shortly to protect Americans from this version of overt theft. A number of people will undoubtedly recognize that, 'Bitcoin fixes this.' That’s only true with self-custody. Account-based crypto has similar vulnerabilities.”

“Tally Coin, for example, is a small crowdfunding service that uses Bitcoin. It’s not controlled by banks, that’s the point. They’re hosting a fundraiser for the truckers. Now, why is this appealing? No one can steal the money. No government can pressure anyone to turn the money over, because governments don’t control crypto.”

According to Davidson, Bitcoin and crypto act “as a substitute for currency but may not possess all the attributes (including legal tender status).”

A federal judge in the U.S. ordered the detention of one member of a couple from Manhattan arrested last week for conspiracy to launder billions of dollars in stolen bitcoin from the infamous 2016 Bitfinex hack. The husband was ordered to be detained because he is supposedly a master at using fake identities and deemed a flight risk.

“Their financial resources could be easily used to facilitate flight…and could all be used to evade [liability].”

It appears that Lichtenstein and Morgan could have been preparing to flee, as Lichtenstein had Russian citizenship before COVID-19 hit. Last week, the Justice Department seized over $3.6B in laundered bitcoin connected to the Manhattan couple. The couple had posed as seasoned crypto entrepreneurs, with Morgan adopting the persona of someone with a “fearless entrepreneurial spirit and hacker mindset.”

The funds allegedly laundered were worth $70M in 2016 when a hacker attacked Bitfinex and stole the funds via 2000 illegitimate transactions. Keys to these funds were found in the cloud storage of Lichtenstein. After this discovery, U.S. authorities took custody of the funds. However, they had not yet obtained evidence that the couple played any part in the hack.

Prosecutors said they had found counterfeit Russian identity documents on Lichtenstein’s cloud storage account for a male and female. The couple had been arrested in their New York apartment. Prosecutors sought to detain the couple because they had millions of dollars in Bitcoin and had bank accounts in Ukraine and Russia.

The crypto market could pose a threat to global financial stability, according to a recent Financial Stability Board (FSB) report. The FSB, an international body that monitors and makes recommendations about the global financial system, identified vulnerabilities related to unbacked assets such as Bitcoin, stablecoins such as USDT, and decentralized finance (DeFi).

The FSB identified liquidity mismatch, rising use of leverage, concentration risks due to high dependence on trading platforms, and lack of regulatory oversights as concerns surrounding the industry. FSB highlighted stablecoins as being susceptible to sudden and disruptive runs on their reserves through credit and operational risks, with the potential to spill over to short-term funding markets.

Stablecoins have already drawn the attention of global regulators including the U.S. and Hong Kong, with the latter recently releasing a discussion paper on stablecoins to collect public feedback on how to proceed with regulation.

While direct connections between the crypto industry and traditional markets remain limited at this stage, the FSB urged global lawmakers to take pre-emptive approaches to regulate these assets.

The regulator said stablecoins have the potential to “become a commonly acceptable means to make payment” but they “may not fall readily into the existing financial regulatory frameworks.” Like other major economies, Hong Kong regulators are looking at ways to increase scrutiny over the burgeoning crypto sector in the city in a bid to contain risks surrounding financial stability and crimes.