The Bitcoin price has registered a marginal drop, as jittery investors hope for recovery and for BTC to push above the resistance levels at $45,000. BTC has been fairly bearish during the week, although it had started Monday in the red, dropping by 0.53%. The price recovered on Tuesday, rising by 2.49% on Tuesday and then pushing up by 2.53% on Wednesday to settle at $43,854. However, BTC fell back during the current session, with the price presently down by almost $0.50%.

The Bitcoin price started the previous week on a bearish note, dropping by nearly 2% on Monday and settling at $46,423. BTC continued to drop on Tuesday, falling by 1.19%, and then fell by over 5% on Wednesday, slipping below $45,000 and settling at $43,544. BTC remained in the red on Thursday as well, registering a marginal drop before falling by 3.68% on Friday and dropping to $41,597. 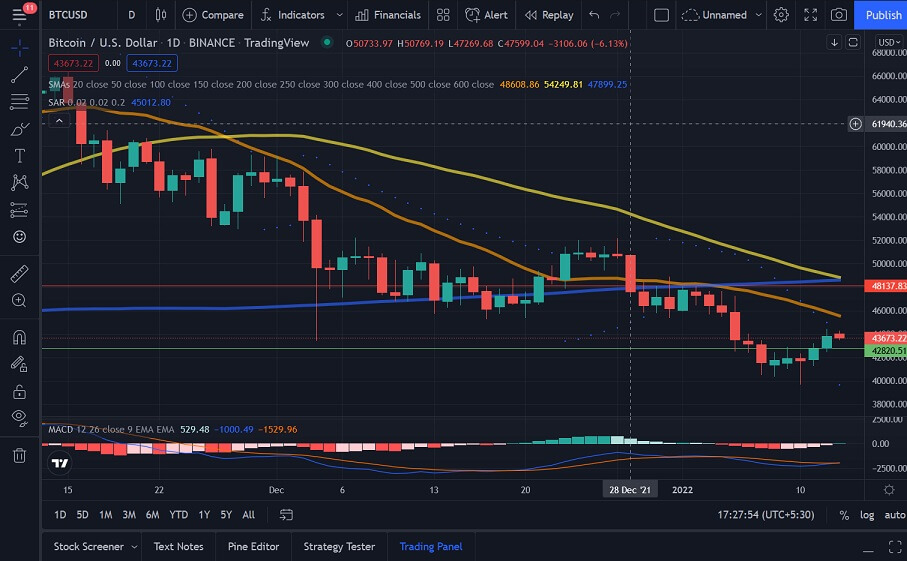 After dropping to $41,597 on Friday, the Bitcoin price recovered over the weekend, rising by 0.39% on Saturday and then by 0.47% on Sunday to end the weekend on a positive note at $41,958. However, BTC fell back in the red on Monday, registering a marginal drop before recovering on Tuesday, rising by 2.49% and settling at $42,773. Wednesday saw BTC continue to push higher, rising to $43,854, before falling back marginally during the current session.

The Parabolic SAR has just flipped to bullish, indicating that we could see the price drop further.

Looking at IntoTheBlock’s IOMAP for the Bitcoin price, we can see that BTC faces strong resistance at around $48,147. At this price level, over 2.4 million addresses have sold more than 1.1 million BTC. 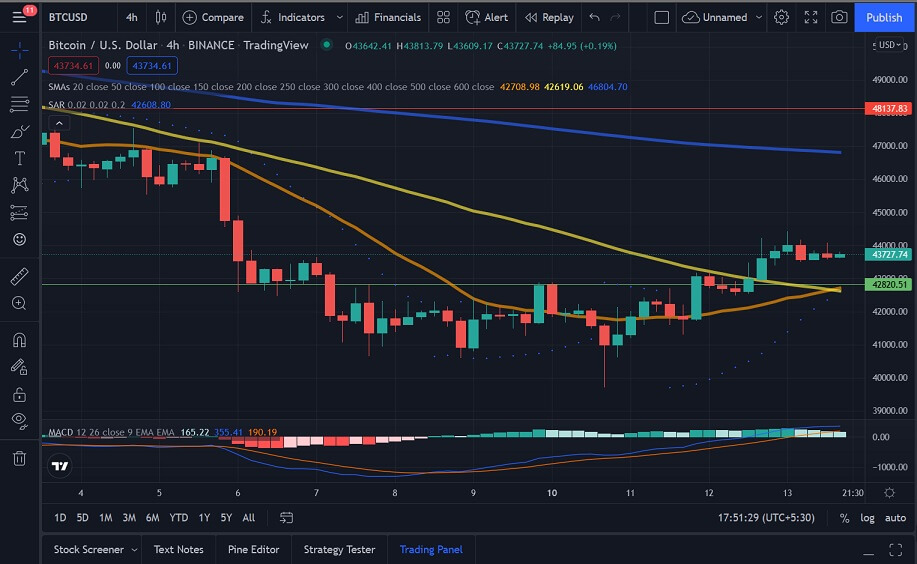 Former Twitter CEO and Block founder Jack Dorsey has announced plans to create a “Bitcoin Legal Defense Fund” with Chaincode Labs co-founder Alex Morcos and Martin White, who appears to be an academic at the University of Sussex.

Referencing open-source developers who are often independent and, therefore, susceptible to legal pressure, the email said:

“Litigation and continued threats are having their intended effect; individual defendants have chosen to capitulate in the absence of legal support. We propose a coordinated and formalized response to help defend developers.”

The announcement went on to describe the Bitcoin Legal Defense Fund as a “nonprofit entity that aims to minimize legal headaches that discourage software developers from actively developing Bitcoin and related projects.”

“The main purpose of this Fund is to defend developers from lawsuits regarding their activities in the Bitcoin ecosystem, including finding and retaining defense counsel, developing litigation strategy, and paying legal bills.”

Cash App is developed and owned by Block (formerly Square), a fintech firm co-founded by former Twitter CEO Jack Dorsey. The announcement of the Bitcoin L2 integration was shared as a notification on the official Cash App application. A Twitter user shared the screenshot and said: 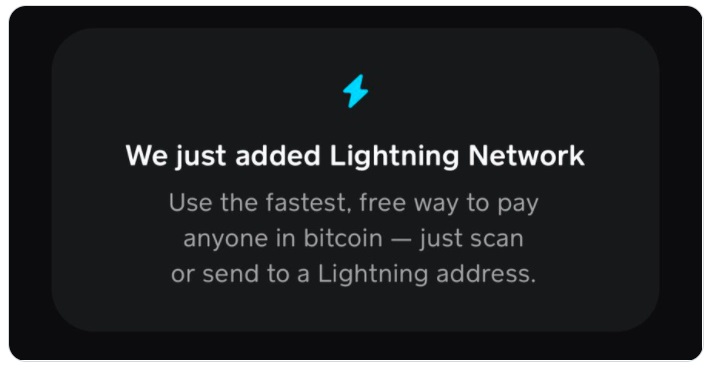 The Lightning Network protocol addresses the noted limitations of the Bitcoin blockchain to improve speeds while reducing transaction fees. Last month, Dorsey featured in a video with Lightning Development Kit (LDK), a service developed by Spiral, a Square subsidiary focused on developing the Bitcoin ecosystem.

LDK allows developers to integrate Lightning protocols into Bitcoin wallets and related services. Before leaving Twitter, Dorsey had voiced his interest in integrating L2 protocols for the newly launched tipping services on Twitter and BlueSky.

The recent data from Business of Apps shows that Cash App has catered to over 36 million users across the United States and the United Kingdom. Favoring ongoing Bitcoin adoption, Cash App has launched a service that allows users to gift BTC and stocks over the holiday season. Cash App allowed users to send a minimum of $1 worth of BTC without owning the assets beforehand.

Iran’s central bank and the country’s Ministry of Industry have agreed to a deal that will enable local merchants to begin using crypto for foreign trade settlements, per local media reports.

A mechanism, finalized during the first meeting of a joint foreign currency working group between the bank and the ministry, will involve linking the bank’s crypto platform with Iran’s Comprehensive Trade System. The system will allow local businesses and merchants to settle payments with international partners when using crypto. Further details on when the deal would come into effect have not been provided.

The deal comes as Iran continues to explore means to circumvent economic sanctions imposed by the US in 2012 over Iran’s nuclear activity and the international community’s concerns relating to the country’s nuclear program at the time.

Alireza Peyman-Pak, the ministry’s deputy minister and head of Iran’s Trade Promotion Organization, an affiliate of the Ministry of Commerce, announced via his social media account recently, the Tehran Times reported.

“We are finalizing a mechanism for operations of the system.”

Iran’s stance towards crypto has oscillated in recent years. In May of last year, Iranian authorities banned the domestic trade activity of crypto assets obtained from outside the country’s borders in an attempt to slow capital flight — viewed as depreciating the country’s currency, the rial.

Hong Fang, the CEO of cryptocurrency exchange OKCoin, has said Bitcoin’s price target of $100,000 is still at play despite being vulnerable to market dynamics.

Speaking to CNBC, Fang stated that Bitcoin could surpass the mark if the asset’s fundamentals stay in place without any network changes. According to her, determining when Bitcoin will hit the record price is challenging, especially with the surged market volatility. She acknowledged that the Bitcoin price trajectory might face competition from other assets jostling for the sector’s capital.

However, Fang suggested the coin might encounter short-term volatility due to events concerning leveraged products and derivatives.

“I still believe that the $100,000 price point is reasonable, but the timing can be a bit elusive because we are at the mercy of market dynamics. <…> The other side of it is also there are assets competing for capital within the crypto space. So I think there’s a lot of elements playing, in the short term, but long term I still think that getting to $100,000 or even a higher price is, shouldn’t be a problem.”

In general, for cryptocurrency market players betting on Bitcoin to surge in the future, the $100,000 mark has become the ideal target. According to Bloomberg Intelligence chief commodity strategist Mike McGlone in 2022, investors should expect the asset to form a $50,000 support level and a resistance of $100,000.

Looking at the Bitcoin price chart, we can see that BTC has dropped marginally during the current session. While the death cross looked imminent, buyers pushed the price above $42,000 during the week. If bulls do return to the market, we could see BTC push above the resistance levels at $45,000, although any significant price drop could push the price down to below $40,000. It should also be remembered that the previous death cross events led to a renewed bull run for BTC.