Bitcoin Technical Analysis: BTC Back On Track After Dropping Below $54,000 On Friday

The Bitcoin price had posted a marginal recovery over the weekend, with BTC currently back above $54,000. BTC had risen by 2.50% on Thursday, rising to $58,813. However, the price fell drastically on Friday, as sellers pushed the price below $54,000 to $53,947. Despite the bearish sentiment, the price recovered on Saturday, rising by 2% and pushing above $55,000. The current session sees BTC continue to push up, but the session has seen a marginal drop.

The Bitcoin price started the previous weekend on a positive note, with the price pushing up to $59,914 on Saturday. However, the price fell back on Sunday thanks to the 50-day SMA and registered a marginal drop. BTC registered a much more significant drop on Monday, as the price fell by almost 6%, dropping to $56,335. BTC pushed back on Tuesday, rising to 57,678 after registering an increase of 2.38%, but fell back on Wednesday, dropping marginally by 0.52%. 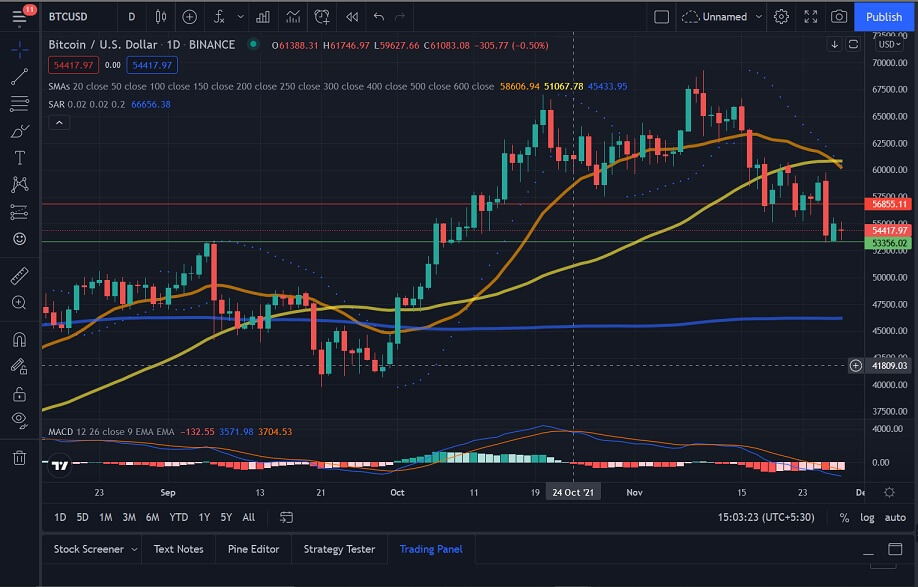 After a marginal drop on Wednesday, the Bitcoin price pushed up on Thursday, rising by 2.50% and settling at $58,813. However, Friday saw bearish sentiment take over, as BTC tumbled by over 8%, dropping to $53,947. The price recovered on Saturday, as buyers pushed the price up by 2%, with BTC moving to $55,204. The current session sees buyers and sellers vying for control, with BTC currently down by over 1%.

We can see that the MACD is currently bearish, indicating that the price could drop. However, we could see it flip to bullish if the price manages to recover.

Looking at IntoTheBlock’s IOMAP for the Bitcoin price, we can see that BTC faces strong resistance at around 56,801. At this price level, over 1.9 million addresses have sold 1.2 million BTC. 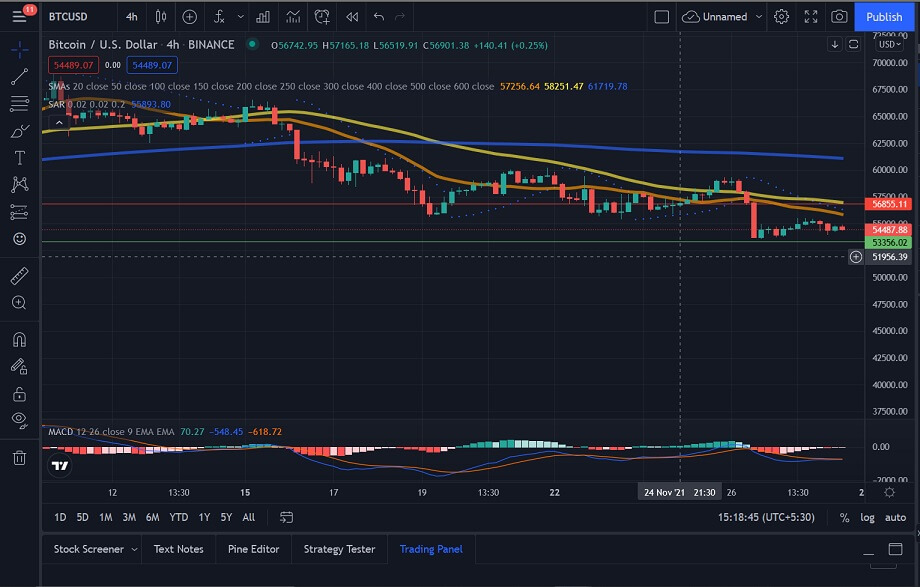 The US Not Supporting El Salvador Because Of Power Preservation?

El Salvador’s US ambassador Milena Mayorga recently said that America and international organizations are not happy with the country’s decision to adopt Bitcoin as legal tender. However, Mayorga added that El Salvador is not afraid to burn bridges with former allies and is marching on with its adoption of Bitcoin. The ambassador spoke about recent developments that have transpired since the country crossed the Rubicon.

Per a CoinDesk report, Mayorga said:

“The concern in Washington DC is about losing the power of the dollar and we can understand that. But Salvador has to move on and be on a different level.”

The ambassador noted that Bitcoin offers the country an alternative funding option away from the traditional methods provided by aid organizations like the IMF. She added:

“They are afraid and concerned because if we succeed, a lot of countries are looking to follow our lead.”

She noted that in the last 30 years, the country has suffered from corrupt leadership and a blatant lack of transparency. She also believes that Bitcoin will help President Bukele’s administration give Salvadorans myriad opportunities and a stable economy.

Before the Bitcoin Law, the IMF had voiced its concerns against the country’s adoption on grounds that the asset’s volatility could be harmful to the economy. In a recent concluding statement, the Fund noted that there were concerns with the levels of investor protection in the Chivo wallet but commented that the economy has rebounded after the pandemic.

Looking at the Bitcoin price chart, we can see that BTC had registered a sharp fall on Friday before recovering on Saturday. The current session sees buyers and sellers vying for control. If buyers gain control, we could see BTC push above $55,000. However, if sellers gain control, the price could drop below $54,000.