The Bitcoin price has registered a marginal drop during the current session, as it slipped below $42,700, with market watchers keenly watching BTC’s trajectory. The Bitcoin price was fairly positive over the weekend, rising by 0.39% and then by 0.93%, ending the weekend at $42,158. However, Monday saw BTC back in the red, as the price dropped by 1%, falling to $41,735, but recovered on Tuesday, rising by 2.49% and settling at $42,773, before registering a marginal recovery. 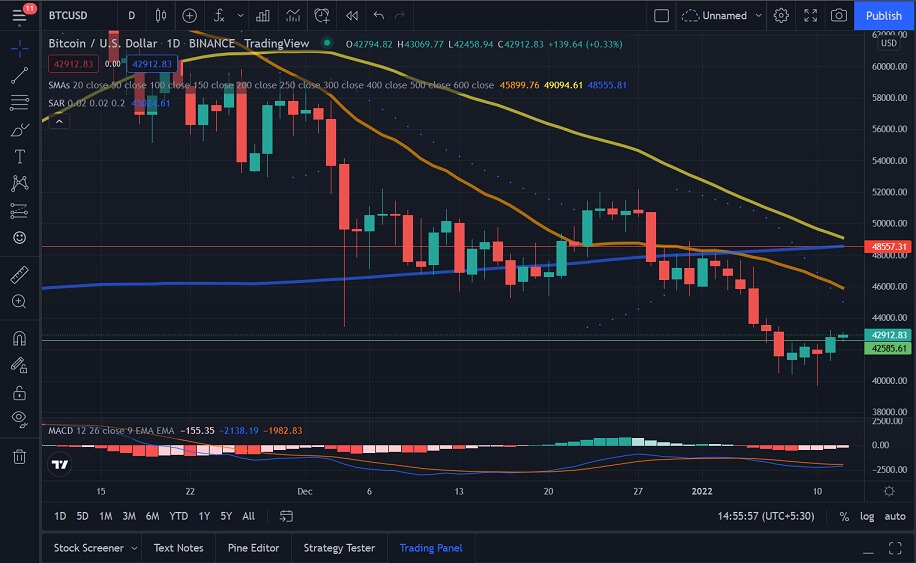 We can see that the MACD is currently bearish, but if the price continues to increase, we could see it flip to bullish.

Looking at IntoTheBlock’s IOMAP for the Bitcoin price, we can see that BTC faces strong resistance at around $48,533. At this price level, over 2.4 million addresses have sold more than 1.2 million BTC. 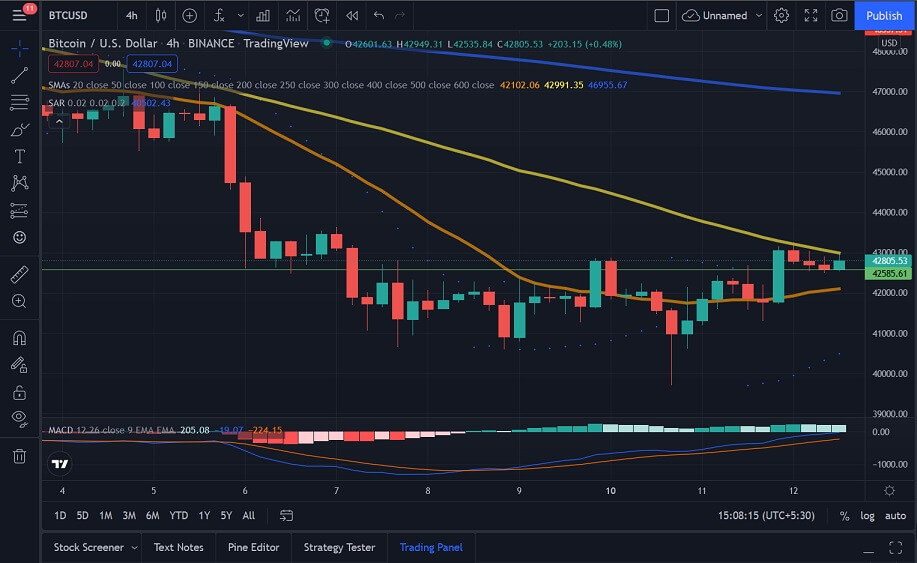 According to data shared by Twitter user @Diditaihuttu, an ultra-large Bitcoin whale who owns over 122,000 BTC has been buying more Bitcoin throughout 2021 and accelerated the purchasing in November of last year.

Since then, the whale has purchased more than a whopping 4,000 Bitcoins, adding them to their crypto riches. The whale address 1P5ZEDWTKTFGxQjZphgWPQUpe554WKDfHQ, as per BitinforCharts, holds a total balance of over 122,972 Bitcoins, which amounts to over $5,179,111,100 in fiat.

Over the past few months, since November, this whale has been buying Bitcoin stashes sized from 120 to almost 500 BTC. According to @Diditaihuttu, who shared a screenshot of the whale's purchases, the mega Bitcoin holder made only one sale of 1,500 BTC. Aside from that, the whale has only been grabbing more of the flagship cryptocurrency.

Back on January 7, that amount of Bitcoin constituted a whopping $225,204,067. Another major wallet, though, sold 4,250 Bitcoin. Chinese crypto-journalist Colin Wu Wu pointed out that those three wallets were not marked as belonging to any crypto exchanges.

Crypto miners in Kazakhstan remain hopeful about their local businesses as most of their facilities have not been reported to be damaged during the mayhem that erupted in the country last week, but unpredictable internet connectivity continues adding to the uncertainties.

According to a Forkast report, Alan Dorjiyev, president of the National Association of Blockchain and Data Centers Industry of Kazakhstan, said:

“Miners are still assessing the situation, as no damage has been done to mining facilities.”

Dorjiyev said internet connection was available in most regions, but it was still very limited in the Almaty region, where riots took place mainly in the southern part. While the internet remains an issue for miners, some are considering going for satellite internet services.

“Fiber connection is definitely very affordable. However, satellite can be a reserve option.”

Didar Bekbauov, a co-founder of Xive, which operates crypto mining farms in Kazakhstan, tweeted recently that it has restarted about half of its mining operations in the country and its team is already looking for satellite network service backups.

Morocco Is Number One For Bitcoin Trading In North Africa

Recent Triple A data has indicated that 0.9 million people (roughly 2.4% of Morocco’s total population) own cryptocurrency currently. That puts the kingdom as the top country in North Africa and the top 50 holders of cryptocurrency population percentage, just ahead of Portugal.

Data from Useful Tulips, a platform that tracks peer-to-peer BTC trading across the globe, confirmed the trend. The Kingdom of the West, as known locally, has been the runaway North African leader for BTC trades in the past year.

Unfortunately for crypto enthusiasts, there has been no change in crypto laws in recent years. According to Morocco’s Foreign Exchange Office, it will not support a “hidden payment system that is not backed by any financial institution.”

While the law came into being in 2017, the ban has not reduced adoption, and as the data shows, Moroccan crypto enthusiasts continue to circumvent the ruling. Nearby, the Egyptian pound is gaining on the Moroccan Dirham for BTC trades. On the 30 day period, UsefulTulips showed that Egypt is $20,000 short of catching Morocco. It remains illegal to trade BTC and crypto in Egypt.

Whale Transactions Are Dropping On Bitcoin Network, But Here Is A Positive Sign

"Major whale transactions aren't quite coming at the frequency they were in October or November. Our metrics indicate that the $BTC network is getting around 13k transactions per day that exceed $100k in value. $ETH's network is seeing about 9k per day."

Notably, Bitcoin hit all-time highs of $69,000 on November 10 as investors cheered the debut of the first Bitcoin futures ETF. While the reason for the drop in whale transactions remains as yet unknown, the lackluster Bitcoin price action may have likewise contributed.

This is because, to avoid price slippage, traders who typically perform large-volume transactions may prefer to split their orders into smaller quantities over a longer period. Market prices can vary quickly during periods of heightened volatility, causing slippage to occur during the time between when a trade is ordered and when it is executed.

This may result in smaller-sized transactions but not necessarily a decrease in overall transaction volume.

Looking at the Bitcoin price chart, we can see that BTC has registered a marginal drop during the current session, as buyers and sellers look to establish control. If sellers take control, we could see BTC drop to $42,500 or below, but if buyers establish control, BTC could push above $43,000.