The Bitcoin price continued to drop as sellers remained in control. After slipping below $64,000, the current session sees BTC at $61,200 as sellers look to push the price towards $60,000. BTC has been bearish since Sunday, with the price registering a drop of 0.68%, ending the weekend on a bearish note. The price continued to drop on Monday as it slipped to $63,957. The current session sees BTC down by over 4% as it drops towards $61,000. 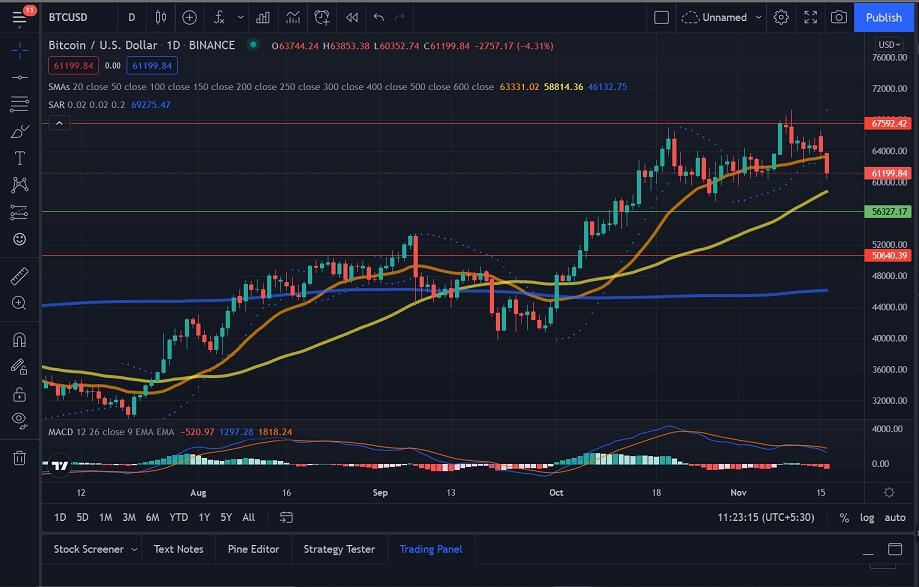 After Thursday’s marginal recovery, the Bitcoin price dropped again on Friday, falling by 1.55% and settling at $64,396. The weekend was a mixed bag for BTC, as it rose to $64,742 on Saturday and then dropped to $64,302 on Sunday to end the weekend on a bearish note. Monday saw BTC continue to be bearish as it dropped further to $63,957, while the current session sees the price down by over 4%. We can see that the Parabolic SAR has flipped to bearish, while the MACD is also currently bearish, indicating that the price could drop further. 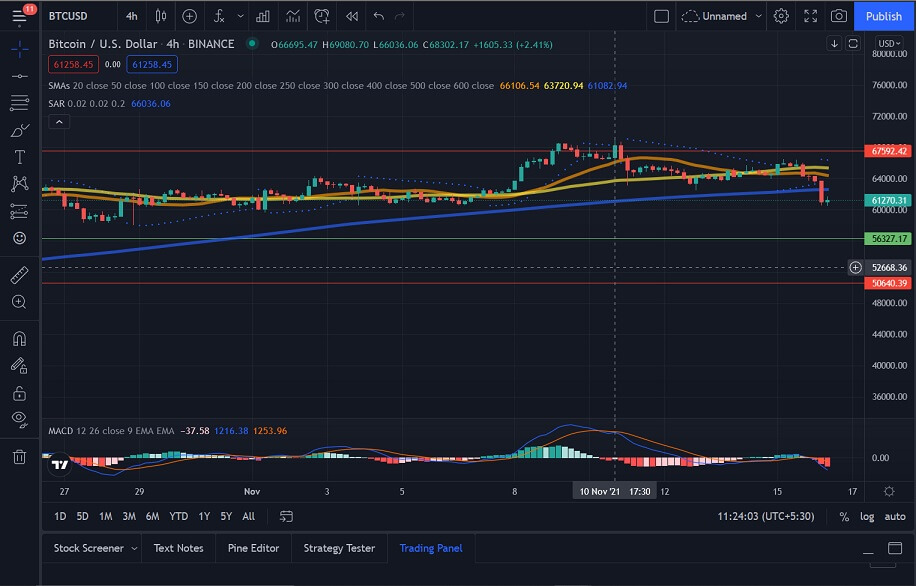 Bitcoin has recently activated the so-called Bitcoin taproot upgrade after reaching block 709,632. This is one of the most important milestones (aside from price) reached by the Bitcoin blockchain in recent years. In addition, this is the first upgrade to Bitcoin since Segwit’s implementation back in 2017.

With this new upgrade, the Bitcoin network becomes more private for those transactions that require multiple signatures, known as multi-sig transactions. Moreover, there might be a possibility for the Bitcoin network to run more advanced smart contracts in the future. Better and more advanced smart contracts, which means it might be possible to unleash a new set of functionalities for Bitcoin.

Alyse Killeen, the founder and managing partner of the Bitcoin-focused venture firm Stillmark, explained that Taproot is an important upgrade that opens new opportunities for entrepreneurs and investors.

On the matter, Killeen stated:

“Taproot matters, because it opens a breadth of opportunity for entrepreneurs interested in expanding Bitcoin’s utility.”

Bloomberg recently found and noted that Bitcoin has achieved 99.996% deflation over the past ten years. What cost one Bitcoin in 2011 now costs around 0.004% of a Bitcoin. Meanwhile, the CPI has risen 28% in dollars during that time.

Just days ago, Bitcoin surged to a new all-time following the release of US inflation numbers for October. Since last year, the CPI has risen by 6.2% across the country. What’s more, when using the 1980’s measure for CPI, inflation has increased by closer to 15%.

Bloomberg’s economists estimate that roughly half of Bitcoin’s recent price surge has been driven by inflation fears. The other half is due to momentum trading:

“Our model shows that for Bitcoin, the importance of inflation and hedging against uncertainty become more important drivers over time, accounting for 50% of price moves in the latest cycle relative to 20% in 2017."

However, Bloomberg acknowledged that Bitcoin has yet to gain enough trust to be counted as a guaranteed inflation hedge. Wilfred Daye, head of Securitize Capital, still says gold is a better alternative, even though Bitcoin is “a new sexy concept."

Looking at the Bitcoin price chart, we see that BTC has been quite bearish during the current week. If the current sentiment persists, we could see BTC drop to $60,000.