The Bitcoin price continued to increase as buyers pushed the price above $51,000 during the current session. BTC has been quite bullish lately and had registered an increase of nearly 5% on Thursday. BTC was able to stay in the green on Friday, registering a marginal increase, before falling back on Saturday and dropping to $50,539. Sunday saw a marginal recovery, with BTC moving to $50,858 before moving past $51,000 during the current session.

The Bitcoin price started the previous weekend on a fairly bullish note, rising by 2.41%. However, Sunday saw BTC fall back, ending the weekend in the red at $46,657. Monday saw BTC register a marginal recovery, rising by 0.55%, before pushing up by over 4% on Tuesday, moving above the 200-day SMA and settling at $48,875. With the 20-day SMA acting as resistance at this level, the price fell back on Wednesday, dropping by 0.85%. 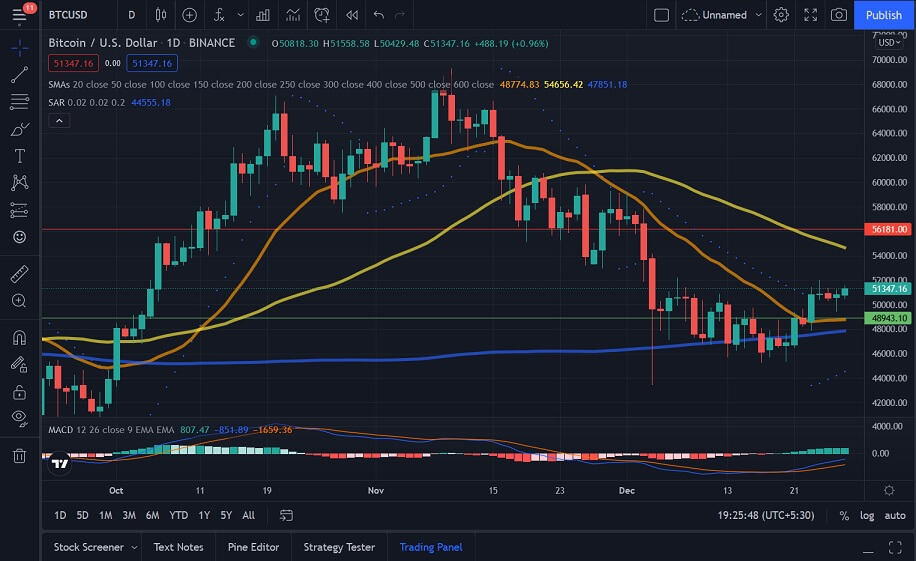 Looking at IntoTheBlock’s IOMAP for the Bitcoin price, we can see that BTC has support at around $48,969. At this price level, over 2.2 million addresses have bought more than 1.1 million BTC.

We can see that the Parabolic SAR has just flipped to bullish, and if the price continues to increase, we could see the MACD flip to bullish as well. 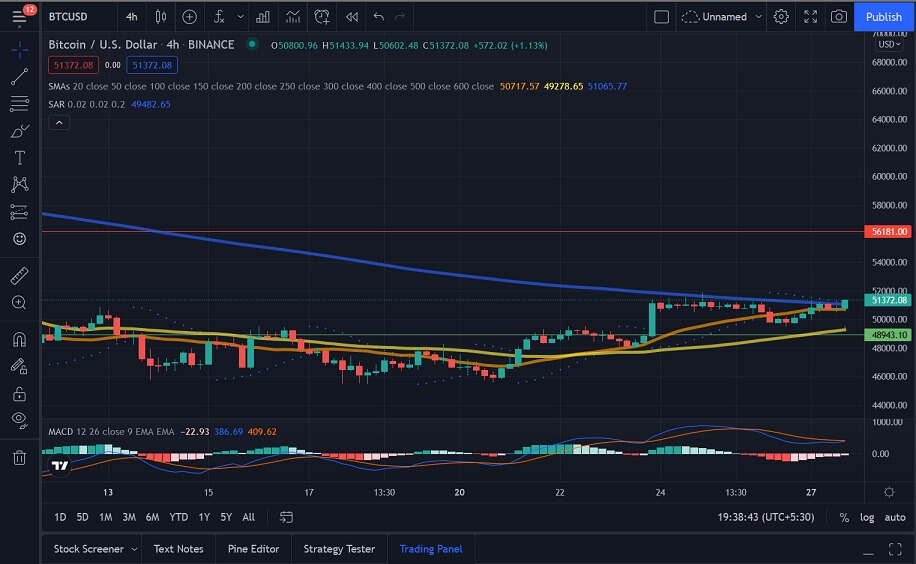 On Lex Fridman's podcast, Bridgewater Associates head Ray Dalio recently appeared and shared his thoughts on Bitcoin. The billionaire said he sees Bitcoin as “alternative money,” reiterating that it has obtained the status of having imputed value.

That said, this will not save or shelter BTC from the rising competition. The executive added:

“Bitcoin is part of that competition, but there will be many moneys (not just crypto money).”

“I definitely want to buy NFTs…This stuff (NFT) is happening, it is real…”

However, his priority remains the same. Gold is still a preferable “store-hold of wealth” since it has been “universally recognized as money” for thousands of years. The businessman pinpointed a few advantages that Gold possesses over its digital cousin.

Notably, Dalio does not see Bitcoin reaching the $1 million mark. As per his analysis, the flagship cryptocurrency is worth about 20% of gold (excluding central bank ownership and jewelry). This is why Bitcoin or even cryptocurrencies will fail to surpass the precious metal.

In a recent Forbes interview, the billionaire co-founder of Bitmain Jihan Wu said cryptocurrencies were born to be volatile. However, their growth over the long term will far outweigh their price fluctuations. He further noted:

“Even if 95% of today’s coins lose all their value and disappear, the remaining 5% will grow massively.”

Wu believes the industry will continue to develop unique innovations. Given that it is not subjected to the constraints of the traditional financial system. He said that Satoshi Nakamoto’s Bitcoin white paper opened “a new world” of opportunities.

Curiously, many proponents have portrayed bullish projections for prime cryptocurrency. For instance, MicroStrategy CEO Michael Saylor recently predicted that the price of Bitcoin could reach $600,000.

In 2013, Wu teamed up with Micree Ketuan Zhan to launch Bitmain Technologies, a supplier of specialized hardware known as mining rigs. Later, he founded Matrixport back in 2019. Wu said that Matrixport currently manages assets of $10B, with an average monthly transaction volume of $5B.

The popular crypto charity platform offers a wide selection of digital assets, including such meme coins as Dogecoin (DOGE), Shiba Inu (SHIB), and Dogelon Mars (ELON). In addition, it accepts cryptocurrencies such as Gala (GALA), Orchid (OXT), and Civic (CVC).

The foundation is named after Susan Goodman Komen, a fashion model diagnosed with breast cancer at 33 and passed away three years later. Her younger sister, Nancy Brinker, founded the organization in 1980. Komen needs donations to provide health awareness education and fund research into breast cancer. Its investment in research has topped $1.1 billion since 1982.

Cryptocurrency holders are encouraged to donate crypto instead of cash since it’s more tax efficient. Notably, the Internal Revenue Service (IRS) classifies crypto as property for tax purposes. Founded back in 2018, The Giving Block has already partnered with hundreds of charities. Humanity Forward, a non-profit founded by Andrew Yang, started accepting cryptocurrencies in May.

Earlier this month, The Giving Block announced a new service that aims to make the process of donating cryptocurrencies easier for wealthy individuals. Last month, the popular charity platform also launched 15 new funds that organize non-profits by their common cause to make it easier for donors to support them.

Looking at the Bitcoin price chart, we can see that BTC has pushed beyond $51,000 during the current session. If the current sentiment persists, we could see BTC push to $51,500.