The Bitcoin price has made a fairly strong recovery during the current session, as buyers look to push BTC back above $42,000. BTC had registered a drop of nearly 5% on Wednesday, as BTC fell to $43,672. The price continued to drop on Thursday, with BTC registering a marginal drop before dropping by 3.66% on Friday. Despite the bearish sentiment, BTC recovered over the weekend, rising by 0.39% on Saturday and marginally up during the ongoing session as well.

The Bitcoin price started the previous weekend on a bullish note, rising by 3.46% on Saturday. However, the price fell back on Sunday, dropping by 1% and ending the weekend at $47,317. BTC continued to drop on Monday, as the price dropped by 1.28%, falling to $46,711. The bearish sentiment persisted on Tuesday, with BTC falling to $45,871 and then falling by nearly 5% on Wednesday and settling at $43,672. 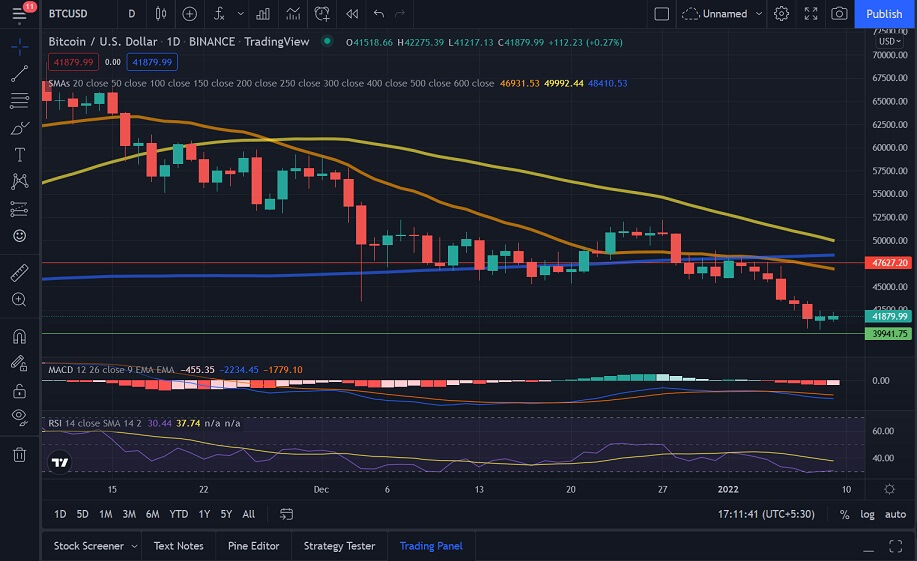 After dropping to $43,672 on Wednesday, the Bitcoin price continued to drop, falling by 1.12% on Thursday. BTC then dropped by nearly 4% on Friday, as the price fell to $41,603. Despite the bearish sentiment, BTC recovered over the weekend, registering a marginal increase on Saturday and pushing up to $41,767. The price continued to push higher during the ongoing session, as BTC looks to move to $42,000.

We can see that the RSI shows BTC nearly below the support level of 30, indicating that the asset is oversold, and we could see the price recover.

Looking at IntotheBlock’s IOMAP for the Bitcoin price, we can see that BTC faces strong resistance at around $47,651. At this price level, over 2 million addresses have sold more than 945,000 BTC.

The MACD has flipped to bearish, indicating that we could see the price push higher. 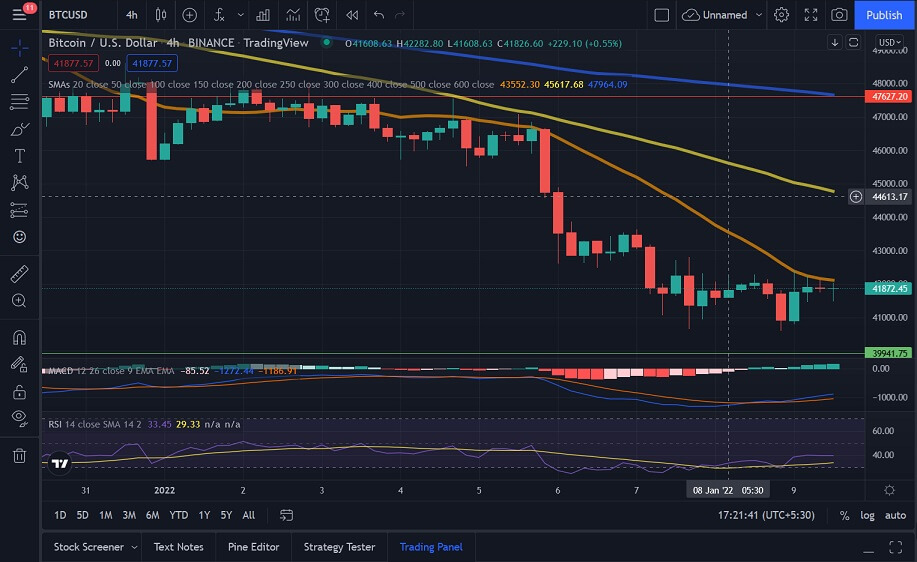 Bitcoin Whales Are Accumulating, Despite Dip

According to Bitinfocharts, the third-largest Bitcoin address purchased 456 BTC last week. The total purchase was worth around $20 million, marking the first significant Bitcoin purchase of the year by the whale as a purchase of six Bitcoins had been recorded on the account at the start of the year.

According to Bitinfocharts, the holdings of the whale have increased to 122,539.57 BTC, which is worth a little over $5.1 billion as the price continues to dip. Bluntz, a cryptocurrency analyst, took to Twitter to express their belief that Bitcoin is likely to find solid support before or around $37,500, indicating that the price dip may not be over.

They, however, expressed hope for the asset class hitting the $100,000 price point within the year.

Bluntz’s sentiment was echoed by Credible Crypto, who quoted the tweet saying:

“The exact scenario I’ve been talking about for some time now. Note that the “ELliOt wAvE”‘ers that everyone loves to hate are some of the few remaining macro bulls here. Let’s get it.”

It seems the recent price dip has caught the attention of several whales, and they are beginning to add to their positions. On the same day that the whale purchased 456 BTC, an account associated with Binance, the world’s biggest exchange, also bought a whopping 43,000 BTC.

Andreessen Horowitz Raises Another $9 Billion To Invest In Crypto

Andreessen Horowitz, a leading venture capital firm and a prominent investor in the cryptocurrency space, has raised a fresh $9 billion to further its involvement in the growing industry.

Andreessen Horowitz (a16z) is amongst the leading venture capital companies investing in all sorts of crypto and tech-related projects. According to a recent announcement, the firm has raised a fresh $ billion “to invest via our Venture, Growth, and Bio Funds.”

"… coupled with the $2.2B Crypto Fund and $400M Seed Fund we raised in 2021, we will continue to invest across the entire spectrum of stages, writing checks as small as $25,000 and up to hundreds of millions of dollars."

The company has been historically bullish on the advent of cryptocurrencies. Its co-founder, Marc Andreessen, stated last year that Bitcoin is fundamental to the technological transformation. a16z has been involved in multiple fundings in the industry. Last October, Axie Infinity raised $150 million in a funding round led by the VC firm.

Chinese journalist and insider Colin Wu recently revealed that Justin Sun, the Tron founder, might not be alone in the club of influential blockchain proponents who use this dip to buy. Wu took to Twitter to share that Sun purchased 100 Bitcoins recently.

"On January 8, Justin Sun said that he would buy another 100 BTC. And also @ the President of El Salvador and the CEO of microstrategy. However, in December, Justin Sun was suspected of depositing 166,000 ETH into Binance."

Sun mentioned the president of El Salvador, Nayib Bukele, and the CEO of Microstrategy, among possible other large-scale buyers of this "dip." Per previous reports, on December 17, 2021, Justin Sun announced that he planned to resign as TRON CEO and become Grenada's ambassador to the WTO.

Wu added that Justin Sun deposited a nine-digit sum in ETH to Binance recently. A few days ago, on the Fed's alarming announcements and the Kazakhstan Internet shutdown that affected 12% of the Bitcoin (BTC) hashrate, the flagship crypto plunged to multi-month lows at $41,500.

The Crypto Fear and Greed Index plummeted to 10/100 recently, its lowest level since the mid-July sell-off. The last time it was so low was when the BTC price tumbled below $30,000.

Looking at the Bitcoin price chart, we can see that BTC has recovered over the weekend. If buyers can maintain the current momentum, we could see the price push above $42,000.