The Bitcoin price recovered during the current session, as buyers pushed the price back above $57,000. BTC had pushed up to $59,914 on Saturday, as it rose by over 3%. However, with the 50-day SMA acting as resistance, the price fell back on Sunday, posting only a marginal drop. Monday saw a significant drop, as the price dropped by almost 6%, as the price dropped to $56,335.

The Bitcoin Price started the previous week on a bullish note, as the price pushed up marginally on Saturday before rising by 1.75% on Sunday and settling at $65,909. Despite the bullish weekend, Monday saw the price fall back in the red as BTC dropped by 3.30%, dropping to $63,736. BTC slipped below the 20-day SMA on Tuesday, as the price registered a sharp drop of 5.43%, falling to $60,275. Despite the bearish sentiment, BTC registered a marginal increase on Wednesday before falling below the 50-day SMA on Thursday, dropping to $56,704. 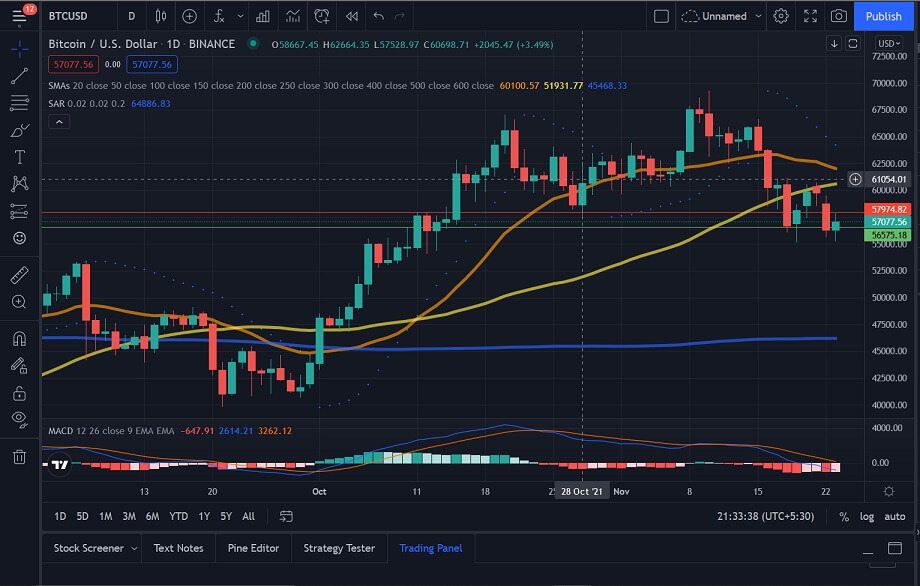 After dropping to $56,704, the Bitcoin price recovered on Friday, rising by 2.51% and settling at $58,128. Saturday saw BTC continue to push up as it rose to $59,914. However, the 50-day SMA was acting as resistance at this level, and the price dropped marginally on Sunday. On Monday, BTC recorded a much larger fall, dropping by almost 6% and settling at $56,335, before recovering on Tuesday and pushing back above $57,000.

We can see that the Parabolic SAR is currently bearish; however, if the price continues to push up, we could see it flip to bearish.

Looking at IntoTheBlock’s IOMAP for the Bitcoin price, we can see that BTC faces strong resistance at around $57,951. At this price level, over 1.2 million addresses have sold more than 690,000 BTC.

Looking at the 4-hour Bitcoin price chart, we can see that BTC had slipped below the 200-bar SMA on the 16th, with the price dropping to $59,006. BTC could only post a marginal increase before falling further and settling at $55,096. The price recovered from this level, rising to $59,903, pushing above the 20-bar SMA. With the 20-bar SMA now acting as support, BTC was able to stay at this level for the next few sessions before dropping below the SMA and settling at $56,063. From this level, BTC pushed up to its current level of $57,451.

Currently, the MACD is bearish, indicating that the price could drop. However, if the price continues to push higher, we could see it flip to bullish. 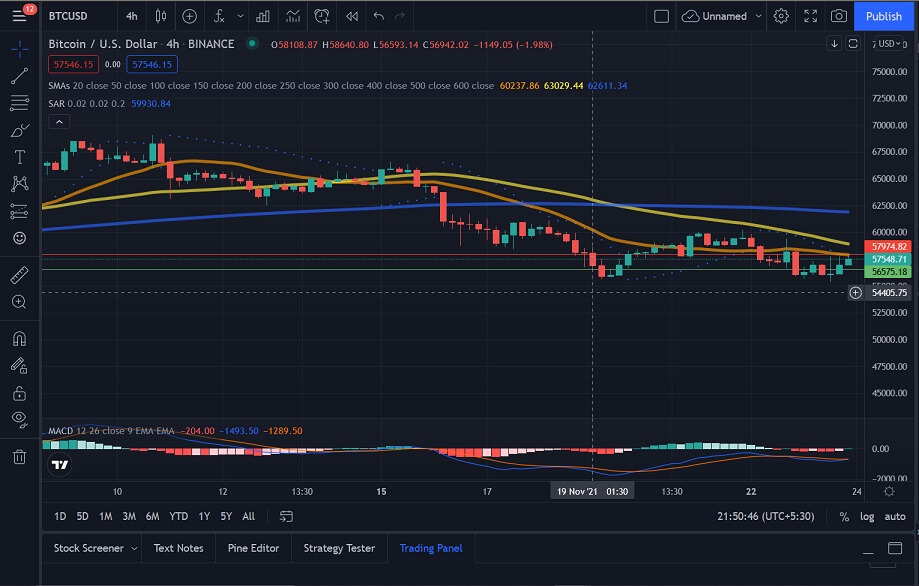 Institutional investors were unfazed by the recent correction in the cryptocurrency markets, as digital asset funds dedicated to Bitcoin and Ether continued to grow, according to data from CoinShares.

Year-to-date, institutional investors have allocated over $6.6 billion to Bitcoin products, $1.17 billion to Ether products, and more than $9.2 billion to crypto as a whole. Grayscale, the largest crypto asset manager, recorded $51.9 billion in assets under management as of November 19th.

October was a record-breaking month for Bitcoin funds, in part due to the approval of two futures-linked ETFs in the United States. Institutional managers bought $2 billion worth of Bitcoin funds over the month as the BTC price reached new all-time highs.

Although November has been less bullish for Bitcoin from a price perspective, the latest funds flow data suggests that investors are not concerned by the market correction. The flagship cryptocurrency remains vulnerable to another pullback in the short term.

According to a recent tweet from crypto analyst TechDev, the 2021 bull market has been lagging the 2017 cycle by five-to-eight days as of July. If the trend continues, Bitcoin and the broader market could be poised for a breakout higher in the medium term.

>1.7 Million Bitcoin-related Stories Have Been Published Per Month

According to data compiled by Finbold, between January 1st and November 21st, around 1.77 million Bitcoin-related pages were published online monthly. January 2021 recorded the highest publications at 4.9 million. In 2021, November has so far recorded 0.36 million publications.

The number of Bitcoin-related publications has grown in correlation with the asset’s surge in value. For instance, in 2021, the asset has gained almost 100% on a year-to-date basis, hitting several all-time highs amid increased adoption and institutional interest.

Overall, with a ready audience, publishers accelerated the churning out of Bitcoin-related articles as more people sought to get information about investment opportunities, risks, price predication, alternatives to Bitcoin alongside other related content.

The buzz has been heightened by notable institutions like Tesla, PayPal, MasterCard, and banks with huge client bases are have begun offering Bitcoin-related services.

Looking at the Bitcoin price chart, we can see that BTC has made a fairly strong recovery during the current session. If the current sentiment persists, we could see BTC push up towards $58,000.