Bitcoin Technical Analysis: BTC Shows Signs Of Recovery, Could Push Back To $50,000

The Bitcoin price could recover during the ongoing session, with strong support building up around $48.335. BTC had dropped by over 5% on Friday, as bears induced a marketwide selloff, with the price dropping to $53,752. The bearish sentiment continued over the weekend, as BTC dropped by 7.57%, slipping below $50,000 and settling at $49,683. Sunday saw the price remain in the red, although BTC registered only a marginal drop. The current session sees BTC at $48,920, as the price looks to climb back towards $50,000

The Bitcoin price started the previous weekend on a bullish note, as the price pushed up by just over 1% on Saturday and then by 5.58% on Sunday to end the weekend at $57,532. On Monday, BTC managed to remain in the green, registering a marginal increase, but fell back on Tuesday, as it dropped by 1.44% to $56,971. BTC registered another marginal increase on Wednesday but again fell back on Thursday, with sellers pushing the price down by 1.04%. 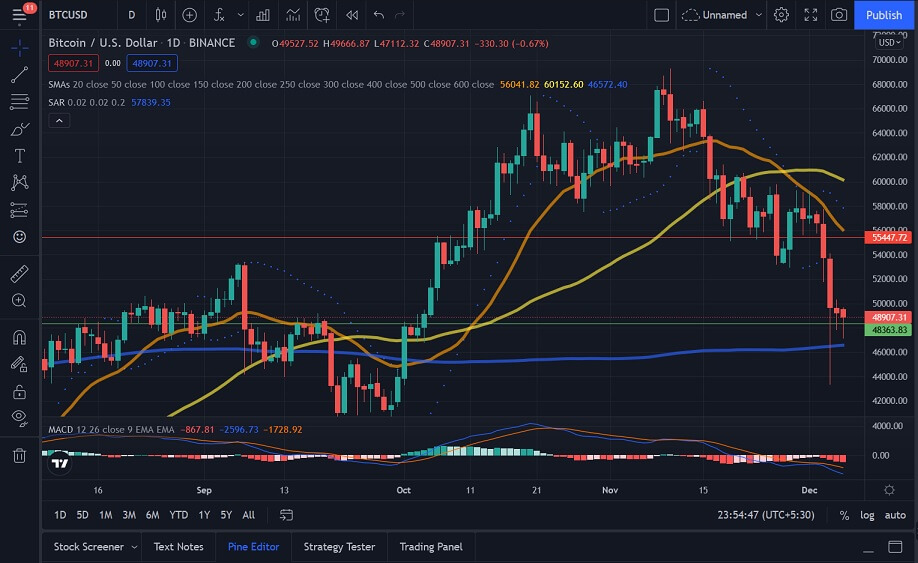 The Parabolic SAR is currently bearish, but if the price manages to recover, we could see it flip to bullish.

The 4-hour Bitcoin price chart shows us that BTC had pushed above the 20 and 50-bar SMAs on the 29th, rising to $57,415. With the 50-bar SMA now acting as support, BTC maintained this level for the subsequent few sessions. BTC slipped below the 20 and 50-bar SMAs on the 2nd when the price dropped to $56,368. BTC then registered a sharp drop on the 3rd, when the price dropped significantly, falling to $46,965 on the 4th. The price pushed up marginally from this level before settling at its current level of $49,160.

We can see that the MACD has just flipped to bullish, indicating that BTC could push up during the session. 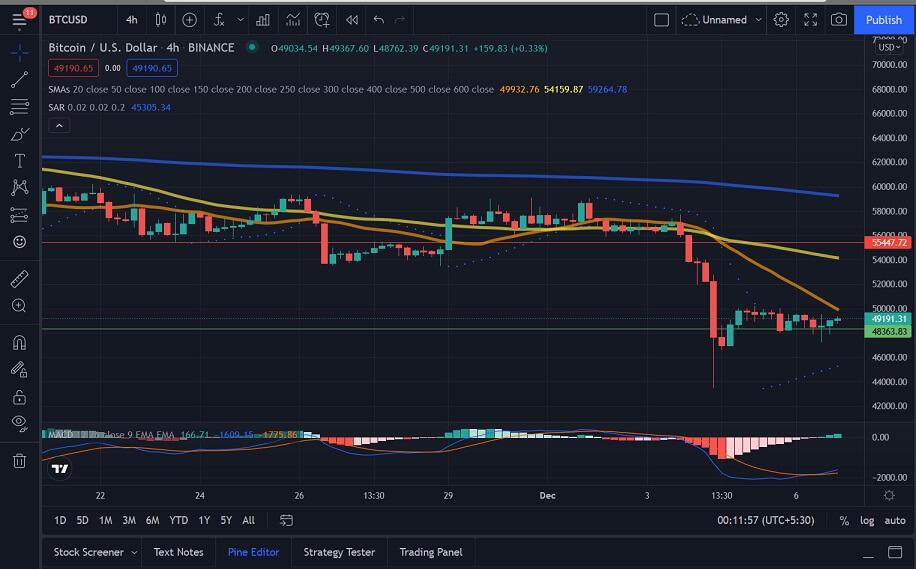 Bitcoin Price Stuck Below $50,000 Due To Extreme Fear

Bitcoin plunged sharply recently, revisiting the $42,000 level for the first time since early October. The Crypto Fear and Greed Index has once again dipped into the “extreme fear” territory.

The index, considered a handy tool for measuring market sentiment, has dropped to just 18 points, the lowest level since July.

On November 9, the index reached a local peak of 84 points, which happened just one day before Bitcoin reached its current all-time high above the $69,000 level.

Despite the price drop, Bitcoin’s hashrate has remained strong and has increased more than 7% higher during the last week. Three-month statistics indicate BTC’s hashpower tapped 190 EH/s recently. Metrics show that the network’s hashrate reached an all-time high on May 9th, 2021, at 191.42 EH/s.

One reason the hashrate remains high despite the recent price drop is that the network’s mining difficulty has dropped during the last difficulty change on November 28. Only around 13 known pools are dedicating SHA256 hashpower to the Bitcoin blockchain, and unknown hashrate otherwise known as stealth miners command 11.75% (19.84 EH/s) of the network’s hashpower.

To enable such payments, Konzum cooperated with the domestic fintech company Electrocoin and its PayCek system, known as Croatia’s first cryptocurrency payment processor. Given the volatility of most digital tokens, the latter will guarantee the buyer a fixed exchange rate at the start of the transaction and provide enough time for successful execution.

Uroš Kalinić, Member of the Management Board of Konzum for Finance and IT noted that Konzum is constantly monitoring global trends hinting that the cryptocurrency industry is one of them.

“As the largest retail chain in Croatia, which in its almost 65-year history is a continuous leader in the domestic market in terms of business results and technological achievements, we are proud to be leaders in another area that is rapidly developing and dictating the future.”

Konzum is not one of the leading supermarket chains in Croatia. Apart from its homeland, it stretches to Bosnia, Herzegovina, and Serbia. The retail giant serves over 650,000 customers each day in more than 700 stores, as the cryptocurrency option will be available in some of them in the upcoming months.

Looking at the Bitcoin price chart, we see that BTC had fallen significantly over the weekend as crypto markets crashed. However, BTC has strong support building at $48,335, and we could see BTC recover from this level and push to $50,000.