The Bitcoin price is looking at sellers attempting to retake control of the current session, with the price dropping into the red during the ongoing session. On Thursday, BTC had registered a significant drop as the price dropped by almost 3%, falling to $47,467. Friday saw the drop continue, as BTC slipped below the 200-day SMA and dropped to $46,131. However, Saturday saw the price recover, as BTC rose by 1.57% and moved up to $46,856. The current session sees the price marginally down, as sellers look to drive the price back down.

The Bitcoin price started the previous weekend on a slightly bearish note, as the price registered a marginal drop on Friday. However, the price pushed up significantly over the weekend, rising by almost 5% on Saturday and moving to $49,437. BTC continued to push on Sunday, as it moved up to $50,134, ending the weekend on a positive note. Despite the positive weekend, Monday saw BTC back in the red, as the price dropped by over 6%, slipping below the 200-day SMA and settling at $46,885. However, Tuesday saw an immediate recovery, with BTC rising by 3.25%, moving back above the 200-day SMA, and settling at $48,409. 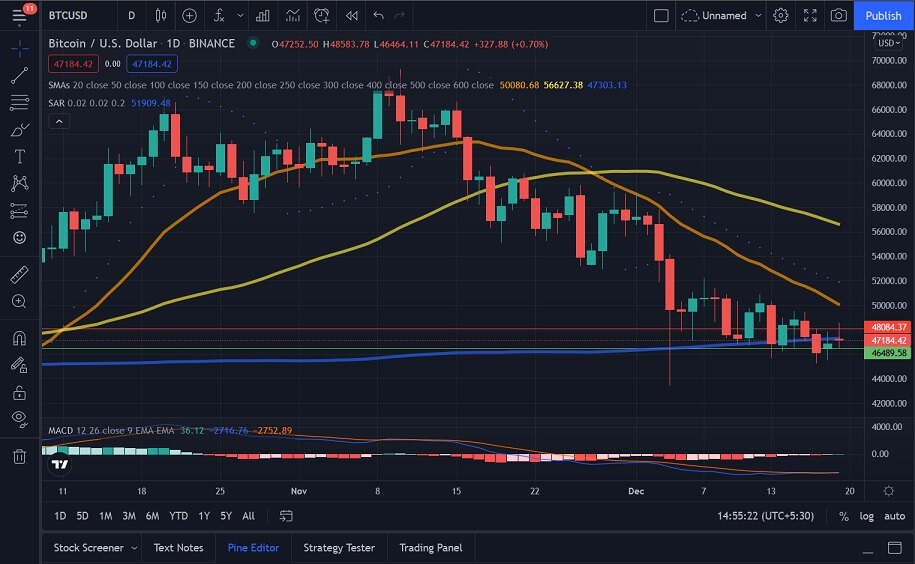 Looking at IntoTheBlock’s IOMAP for the Bitcoin price, we can see that BTC faces strong resistance at around $48,056. At this price level, over 2 million addresses have sold 1 million BTC.

Looking at the MACD and the Parabolic SAR, we can see that they are currently bullish, but if the price continues to drop, we could see them flip to bearish. 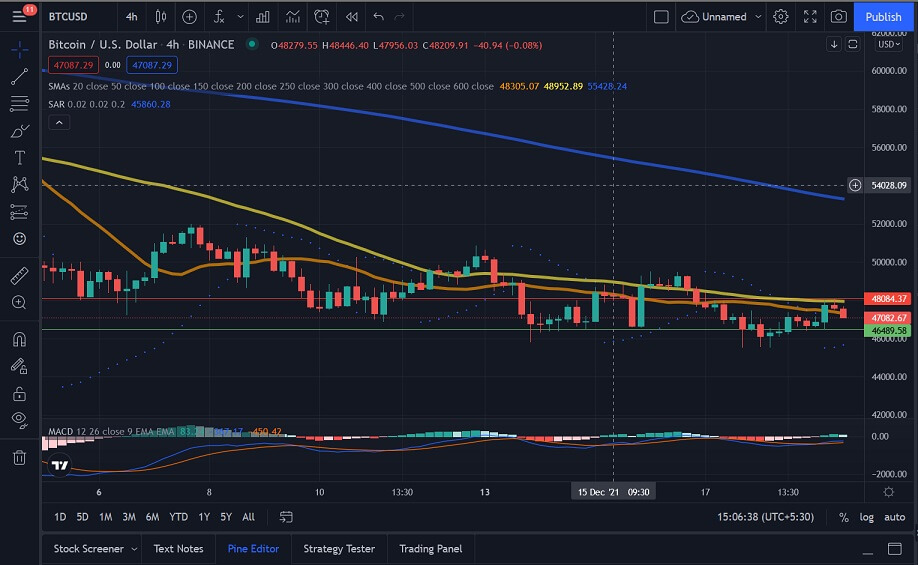 US Credit Unions Can Now Work With Crypto Firms

A recent letter from the National Credit Union Administration says that credit unions have the authority to form relationships with third-party digital asset services. This includes services that allow clients to buy, sell, and hold uninsured digital assets.

An excerpt from the letter reads:

“As insurer, the NCUA does not prohibit FICUs from establishing these relationships.”

FCIUs are “not limited” in the services they can refer members to. However, they must use “sound judgment and due diligence.” This leaves credit unions free to refer members to crypto services. The NCUA noted that other US regulators (like the SEC, CFTC, and FinCEN) have authority over crypto activity. It noted that credit unions “should be cognizant of this fact” and that it will “continue to study and address these issues.”

Currently, only about 126 million Americans are members of the credit union, representing less than 39% of the population of the United States.

Nevertheless, this development has added to how banks and financial institutions are explicitly allowed to work with crypto. The OCC permitted banks to work with stablecoins in September 2020. The SEC and OCC also issued statements allowing banks to act as digital asset custodians in the same year.

Recent statements from the Federal Reserve, OCC, and FinCEN suggest that the role of banks in the crypto market would be refined in 2022 following inter-agency discussion.

Bitcoin and the broader cryptocurrency market have witnessed significant volatility as of late, with the price of the flagship digital asset plummeting below the $50,000 price level in recent weeks. Given the present unfavorable market environment, the number of times Bitcoin has been pronounced dead has risen to over 42 so far in 2021, according to 99Bitcoins, the cryptocurrency’s official obituary. 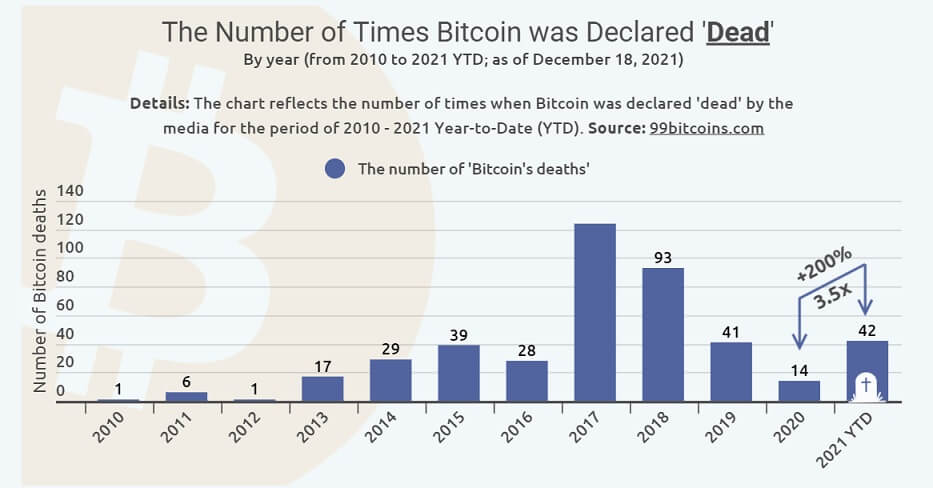 Founded in 2010, the website has functioned as the official repository for all Bitcoin obituaries. The site uses stringent standards to decide what precisely qualifies as an obituary in each instance. Several factors are considered to determine whether or not an obituary should be published on the website. These include:

“The content itself (not just the headline) must be explicit about the fact that Bitcoin is or will be worthless (no “maybe” or “could”).”

Additional requirements necessitate that content must be produced by someone with a significant following or a website with a high number of visitors. The most recent death recorded occurred on December 14, 2021, with the price of Bitcoin at $46,612, the eulogy made by the Bank of England’s deputy governor Sir Jon Cunliffe, who expressed concern that the rapid rise of cryptocurrencies may represent a serious danger to the country’s established financial system, which has been in place for decades.

Looking at the Bitcoin price chart, we can see that sellers have taken the current session at the time of writing, with the 200-day SMA acting as resistance. If the current sentiment persists, we could see the price drop to $47,000.