Bitcoin Technical Analysis: Can BTC Move Back To $47,000

The Bitcoin price is marginally up during the ongoing session, as buyers look to take control of the session and push BTC towards $47,000. The price had dropped by over 2% on Friday, as BTC entered the weekend on a bearish note. On Saturday, BTC made a strong recovery, rising by 3.46% and settling at $47,797, where the 200-day SAM acted as resistance. As a result, BTC fell back on Sunday, falling to $47,317, and then dropped to $46,423 on Monday, starting the week on a bearish note.

The Bitcoin price got off to a fairly bearish start to the previous weekend, dropping by 0.73% on Saturday. The price recovered on Sunday, registering a marginal increase on Sunday, but fell back in the red on Monday, falling by 0.22%. Tuesday saw BTC register a significant drop, falling by over 6%, slipping below the 20 and 200-bar SMAs and settling at $47,599. BTC continued to drop on Wednesday, falling by over 2% and dropping to $46,459 and then rising to $47,154 on Thursday. 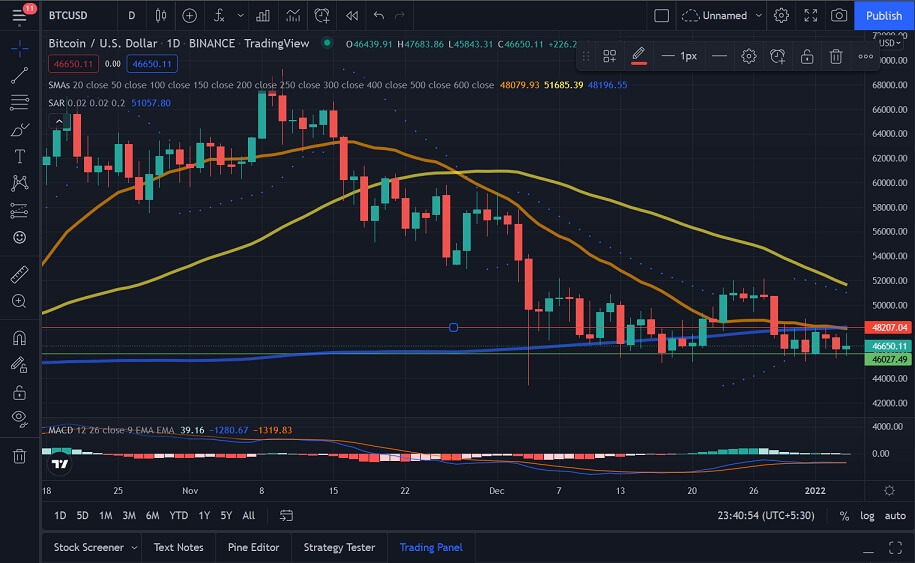 After rising to $47,154 on Thursday, the Bitcoin price fell back on Friday, dropping by over 2% and falling to $46,197. The price recovered over the weekend, rising by 3.46% on Saturday and moving to $47,797. At this level, the 200-bar SMA was acting as resistance, and BTC fell back on Sunday, dropping by 1%. BTC continued to drop on Monday, falling by nearly 2% and settling at $46,423 before rising back during the current session.

We can see that the Parabolic SAR is currently bearish, indicating that we could see BTC drop.

Looking at IntoTheBlock’s IOMAP for the Bitcoin price, we can see that BTC faces strong resistance at around $48,572. At this price level, over 2.4 million addresses have sold more than 1.1 million BTC. 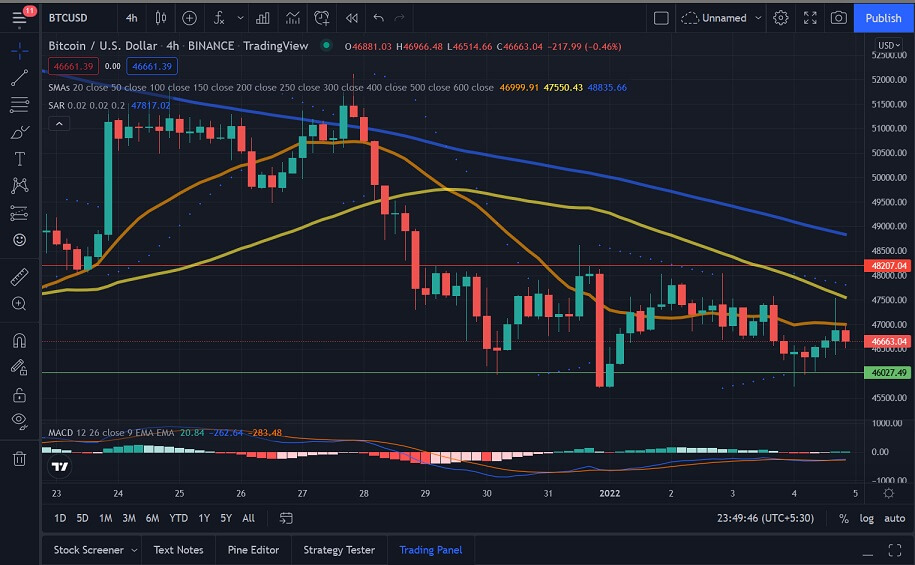 SBF: 2022 Will Bring Regulatory Clarity For The Crypto Industry

In a recent Bloomberg interview, FTX CEO Sam Bankman-Fried shared his thoughts on the industry’s regulatory landscape, the state of NFTs, crypto gaming, the metaverse, and FTX’s strategies to raise its brand awareness.

Bankman-Fried assured that the cryptocurrency industry has managed to gain the interest and respect of regulators globally. Political efforts to touch this issue in Congress, the SEC, the CFTC, and other government offices signal this progress. The CEO believes that the government’s stance will boost cryptocurrency trading, significantly facilitating the entry of large investors.

“I’m optimistic about it (the price of Bitcoin), And the things that make me optimistic basically are (related to) more regulatory clarity in the US and globally, -which I think could help a ton- and institutional adoption. And I think those are also related to each other.”

Sam Bankman-Fried also touched on other important points during his interview. He mentioned that almost every financial institution he has spoken to is interested in entering or exploring the space of cryptocurrencies and blockchain technologies.

He also said he expects that 2022 will mark the beginning of a significant breakthrough in stablecoins regulations and likely a greater involvement of the SEC and CFTC.

He also spoke of the potential for NFTs in the gaming industry and the expansion of the metaverse. He believes that a proper crypto-gaming sector will take years to grow, but he does not deny the potential for it to become a major industry:

“I think (we’ll be) starting to see digital assets make an appearance there (in the metaverse). I expect that’s going to happen in the next few years.”

According to a recent report from We Wealth, Banca Generali’s private clients will be able to buy and sell Bitcoin through the bank’s application. The bank will be integrating the Conio Inc. platform into its Home Banking system, enabling its users to engage in cryptocurrency trading without leaving the bank’s online infrastructure.

The bank purchased a $14 million stake in Conio in December 2020 and has since provided its users with bitcoin custody. Riccardo Renna, the COO of Banca Generali, said that the integration will be completed early in 2022.

“Once the integration is complete, clients will be able to interact safely with an asset class that could be extremely risky if approached incorrectly.”

Renna added that the addition of Bitcoin was part of the bank’s larger plan to provide its bankers and their clients with new and innovative services.

“We worked with Conio to introduce an innovative custody solution based on a multi-signature system that ensures the safety of our clients’ Bitcoin and the possibility of wallet recovery in certain cases, such as inheritance. The recovery process is made possible through a third key, which Banca Generali holds on behalf of our clients, enabling them to recover their wallets if needed. We believe this is the real strength of our proposal and what will set us apart from the rest of the market.”

Banca Generali is part of the Generali Group, one of the world’s top ten insurers. Known as the best private bank in Italy, it caters to high net worth individuals (HNWIs) seeking private banking and wealth management services.

Looking at the Bitcoin price chart, we can see that BTC has registered a marginal increase during the ongoing session. If buyers can retain control of the market, we could see BTC push towards $47,000. However, if sellers retake control, we could see BTC drop towards $46,000.