The Bitcoin price is looking to push towards $48,000 as buyers look to drive the BTC up after a fairly bearish week. BTC had started the week in the red, registering a marginal drop before falling by over 6%, slipping below the 20 and 200-day SMAs and settling at $47,646. The price continued to drop on Wednesday, falling by 0.77%, before registering a marginal increase on Thursday. The current session sees buyers and sellers struggling to control the session.

The Bitcoin price had started the previous week on a positive note, rising by 0.55% on Monday. BTC continued to push up on Tuesday, rising by over 4%, moving above the 200-day SMA and settling at $48,875. With the 20-day SMA coming into play as resistance, the price dropped on Wednesday, falling to $48,620, before pushing up by 4.55% on Thursday, moving above the 20-day SMA and moving to $50,831. Friday saw BTC remain in the green, as the price registered a marginal increase. 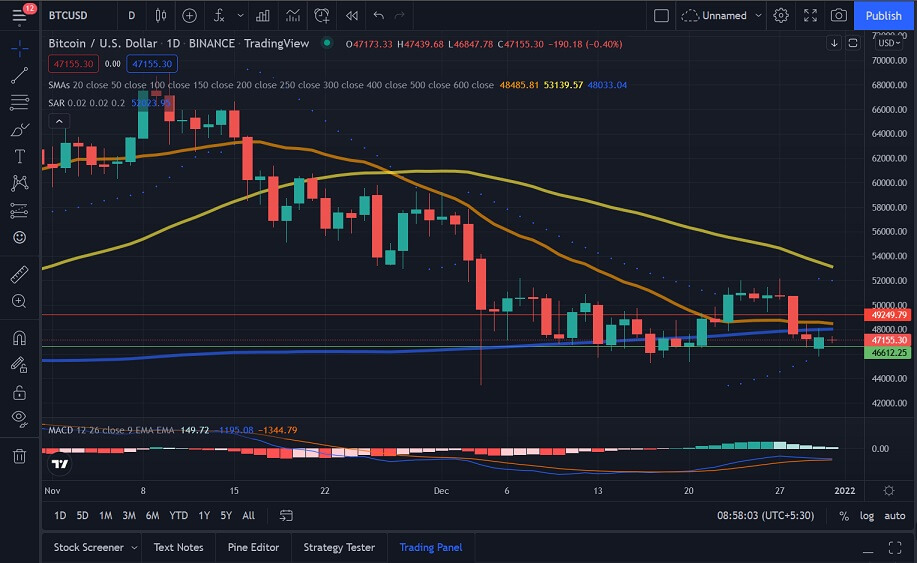 After rising to $50,969 on Friday, the Bitcoin price fell back on Saturday, falling by 0.73% and settling at $50,596. On Sunday, the price recovered, registering a marginal increase, but fell back in the red on Monday, dropping marginally. BTC registered a significant fall on Tuesday, dropping by over 6%, slipping below the 20 and 200-day SMAs and settling at $47,646. The price continued to slide on Wednesday, dropping by 0.77%, before a marginal increase on Thursday. The current session sees buyers and sellers vying for control, and with the Parabolic SAR currently bearish.

Looking at IntoTheBlock’s IOMAP for the Bitcoin price, we can see that BTC faces strong resistance at around $49,244. At this price level, over 1.9 million addresses have sold more than 1 million BTC. 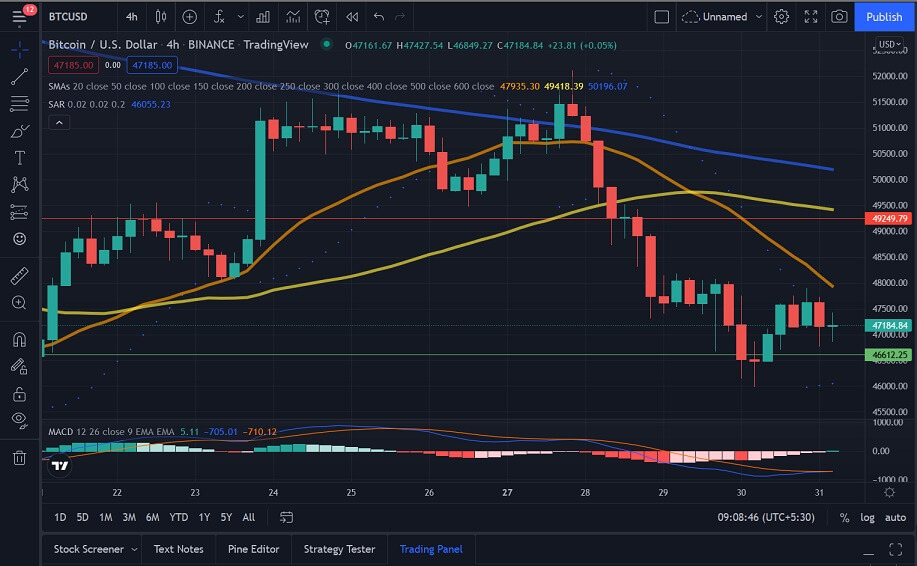 MicroStrategy Purchased Another $94.2 Million Worth Of Bitcoin During December

In December, MicroStrategy purchased approximately 1,914 Bitcoins (approximately $94.2 million), according to an SEC filing. The firm said:

The timing indicates that MicroStrategy continued to buy after a 1,434 BTC accumulation between November 29 and December 8. Per previous reports, MicroStrategy is looking at ways to generate "yield" via its bitcoin holdings. CEO Michael Saylor said during an investor presentation earlier this month that potential options include lending out some of its holdings.

In related news, International Monetary Fund (IMF) warned El Salvador should not use Bitcoin as legal tender due to the risks it poses. It said:

"Given Bitcoin’s high price volatility, its use as a legal tender entails significant risks to consumer protection, financial integrity, and financial stability."

IMF staff say that while it welcomes financial inclusion and growth efforts, El Salvador should address risks related to using Bitcoin as legal tender, its "new payments ecosystem" and Bitcoin trading. The country made Bitcoin legal tender alongside the USD dollar on September 7th.

ProShares Seeks Approval From SEC To Launch A Metaverse ETF

ProShares, the first US-based company to launch a Bitcoin ETF, is now exploring the realm of Metaverse by planning to launch an exclusive Metaverse ETF.

ProShares recently with the US Securities and Exchange Commission (SEC) to seek approval to launch a ProShares Metaverse Theme ETF, an ETF that will track the Solactive Metaverse Theme Index, which includes firms that are associated with the metaverse technology.

The filing further comprised details related to the Solactive Metaverse Theme Index(SOMETAV) that ProShares intends to track once it receives approval from the SEC. The SOMETAV index consists of firms and companies that are using or deploying Metaverse technology in the form of data processing or metaverse devices.

Once approved, it will allow ProShares to gauge and track the performance of the Solactive Metaverse Theme Index, which consists of companies actively involved in the adoption and usage of Metaverse-related technology.

ProShares’ decision to launch a Metaverse ETF comes amidst the rising popularity of the concept that has attracted a tremendous influx of funds these past few months. Recently two Canadian companies, Evolve Funds and Horizons ETF management, have started trading their Metaverse ETFs on Toronto Stock Exchange, proving that the concept has been gaining steady momentum.

Bitcoin billionaire and former Bitmain CEO Jihan Wu recently said that the market cap for crypto would continue to grow to tens of trillions of dollars. Wu, an early adopter of Bitcoin and founding figure for crypto mining rig manufacturer Bitmain in 2013, said the market’s growth would continue despite its propensity for volatility.

He noted that even if 95% of the coins on the market today lose all of their value and disappear, the remaining projects will “grow massively.”

After leaving Bitmain, Wu founded financial services firm Matrixport in 2019, despite the crypto markets being in the depth of a bear market. The company was recently valued at $1 billion in its latest funding round.

Speaking in an interview with Forbes, Wu explained he was very optimistic about the future of crypto-assets.

"We believed that crypto and blockchain together would experience rapid growth in the future to tens of trillions of dollars."

Wu said a large portion of the influx of new users would “stay in the crypto market forever,” creating a necessity for advanced and sophisticated products in order to manage their wealth. He argued that crypto, unlike the traditional financial system, was free to continue to develop unique innovations due to the lack of constraints.

Looking at the Bitcoin price chart, we can see that buyers and sellers are looking to control the session. If buyers take control, we could see BTC push towards $48,000, but if sellers retain control, BTC could drop back below $47,000.