The Bitcoin price had started the week in the red, dropping by almost 2% on Monday. On Tuesday, the price recovered, registering a marginal increase, but fell back on Wednesday, dropping by 1.62% to $41,717. The price continued to drop on Thursday, dropping to $40,735, registering a drop of 2.36%. The current session sees BTC below $40,000, as sellers drove the price down significantly. 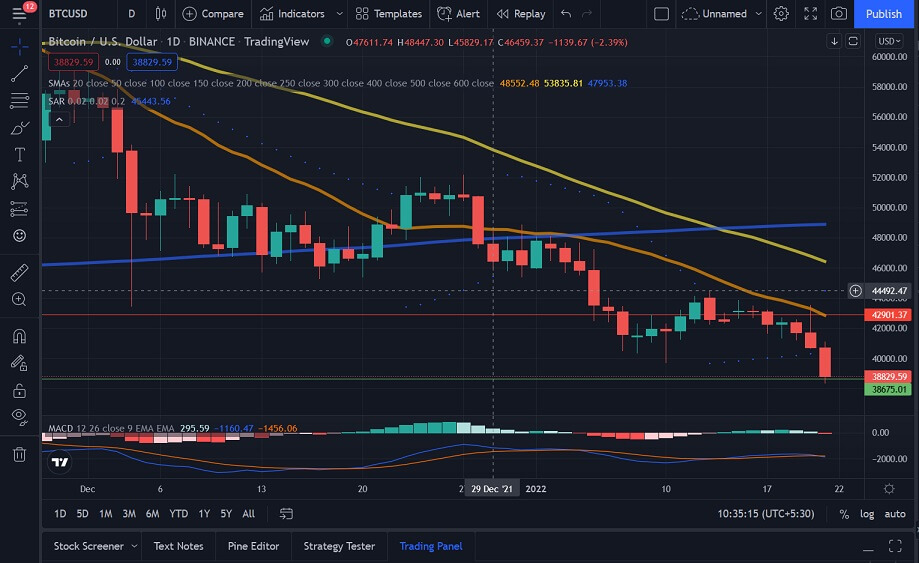 The Bitcoin price fell back in the red on Monday, falling by 1.93% and starting the week on a bearish note. However, BTC was able to register a marginal recovery on Tuesday before falling back on Wednesday and settling at $41,717. BTC, registering an increase of 2.36%. The current session sees BTC down by over 4%, as the price slipped below $40,000, with its current level at $38.950.

Looking at IntoTheBlock’s IOMAP for the Bitcoin price, we can see that BTC faces strong resistance at around $41,892. At this price level, over 1.1 million addresses have sold more than 647,000 BTC.

We can see that the MACD and Parabolic SAR have both flipped to bearish, indicating that the price could drop further. 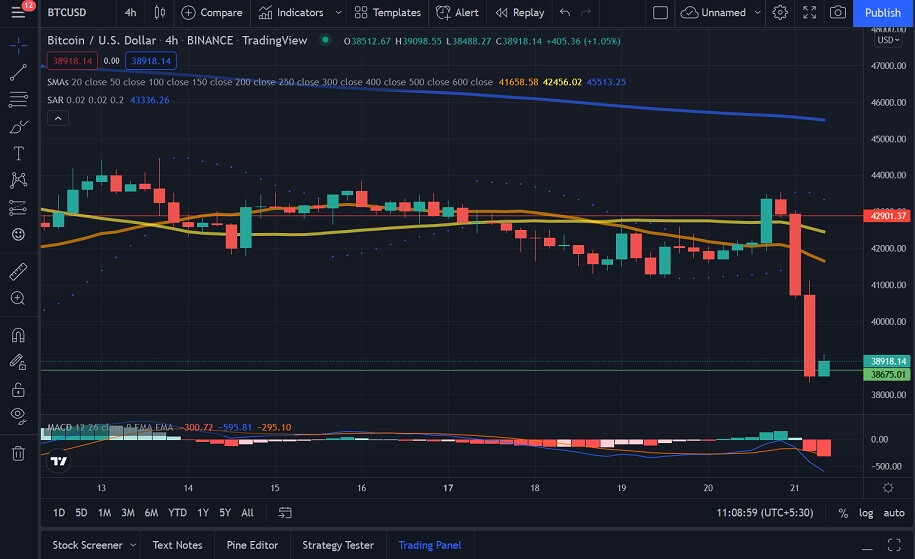 Per a Bloomberg report, tech giant Google will expand its payment features with Bitcoin. The company is trying to top its competition in terms of online services. Therefore, it has been trying to step up its game with Bill Ready as President of Commerce and the recently hired former PayPal executive Arnold Goldberg as Payment Division Chief as it consolidates partnerships to achieve that goal.

The tech giant partnered with Coinbase Global and BitPay to enable a feature that will let users store Bitcoin and other cryptocurrencies. Thus, people can use their crypto holdings to pay for their purchases as if they were using fiat currencies.

According to the article, Google has failed with its goals for its Google Pay feature. The payment service has failed to “gain traction,” except in India. Therefore, they need to add more features to their shopping service.

According to Ready, this initiative will let people leverage “the entire array of financial services out there.” The integration with Bitcoin and other cryptocurrencies seems logical due to their increase in adoption levels and accessibility across the world. Ready said:

"We’re not a bank — we have no intention of being a bank. Some past efforts, at times, would unwittingly wade into those spaces. Our aim is to help create connections. We’re not a conflicted party."

Per Bloomberg, Ready and Goldberg worked in PayPal until the former joined Google to supervise their payments division. Now, Ready has brought in Goldberg to become the vice president and general manager for a new Google project called Next Billion Users.

A London restaurant chain owner has revealed how investment in Bitcoin salvaged his business from collapsing due to the economic impact of the pandemic. According to Aly Hamam, the owner of Tahini restaurant, after a decline in sales, the business resolved to shift its corporate balance sheet to Bitcoin, The Star reported.

Tahini, a Middle Eastern-themed restaurant, had only three locations in London but has now expanded to four more branches in Ontario, Canada. The chain is also targeting to open between 20-25 more joints by the end of 2022.

Following the shift, Hamam claimed the restaurant’s initial Bitcoin investment had spiked 300% over the period capitalizing on the growth of the cryptocurrency sector. He cited that Bitcoin has also acted as a hedge against skyrocketing inflation. Hamam added:

"We made a move to the corporate balance sheet on a Bitcoin standard back in August of 2020 and since then, we’re up more than 300 percent on our initial investment. It’s really done its job of protecting us against inflation, and it worked as we intended it to.”

Interestingly, the restaurant is yet to start accepting crypto payments, but instead, it invests the fiat profit in Bitcoin. In this case, Tahini has managed to sell its Bitcoin holdings to fund any new expansion.

"We keep a working capital for about three to six months in cash, and then the rest all goes into Bitcoin. So, whenever we have an expansion, we’re not forced to sell our Bitcoin to fund that expansion. We try to operate conservatively, where we never have to sell our Bitcoin and we just keep accumulating on our treasury.”

Looking at the Bitcoin price chart, we can see that BTC had dropped below $40,000 during the current session as the crypto market crashed. However, BTC has made a marginal recovery, pushing back to $39,000, and we could see BTC move slightly above its current level.