The Cardano price started the current week in the red as ADA plummeted over 14%, with sellers looking to push the price even lower. ADA had registered a significant drop of over 11% on Friday, dropping to $1.12. The weekend started with the bearish sentiment persisting, as ADA dropped by 4.46% to $1.07. Despite the bearish sentiment, ADA registered a strong recovery of over 5% on Sunday, ending the weekend at $1.12, before falling back during the ongoing session.

The Cardano price was extremely bullish at the start of the previous weekend, rising by 2.19% on Friday. The weekend saw ADA surge, as the price rose by 2.54% on Saturday and then rose over 9% on Sunday, pushing above the 20 and 50-day SMAs and settling at $1.41. The bullish sentiment persisted on Monday, as ADA surged by almost 14% and settled at $1.60. However, after reaching this level, the price fell back in the red, dropping by nearly 9% and settling at $1.45, and then fell over 8% on Wednesday, dropping to $1.33. 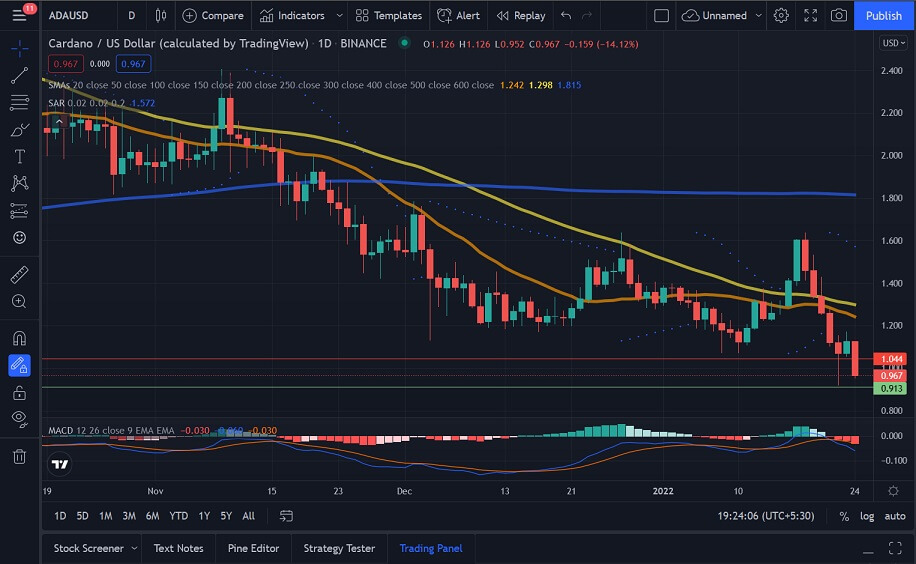 The Cardano price continued to drop on Thursday, as ADA slipped below the 50 and 20-bar SMAs, and dropped to $1.26. Friday saw ADA drop over 11%, slipping below $1.15 and settling at $1.12. The weekend started with the bearish sentiment persisting, as ADA dropped over 4.46% and settled at $1.07, before recovering on Sunday and settling at $1.12. However, the price fell back during the current session, with ADA down nearly 15%, slipping below $1.

Looking at IntoTheBlock’s IOMAP for the Cardano price, we see that ADA faces strong resistance at around $1.04. At this price level, over 65,000 addresses have sold more than 1 billion ADA. 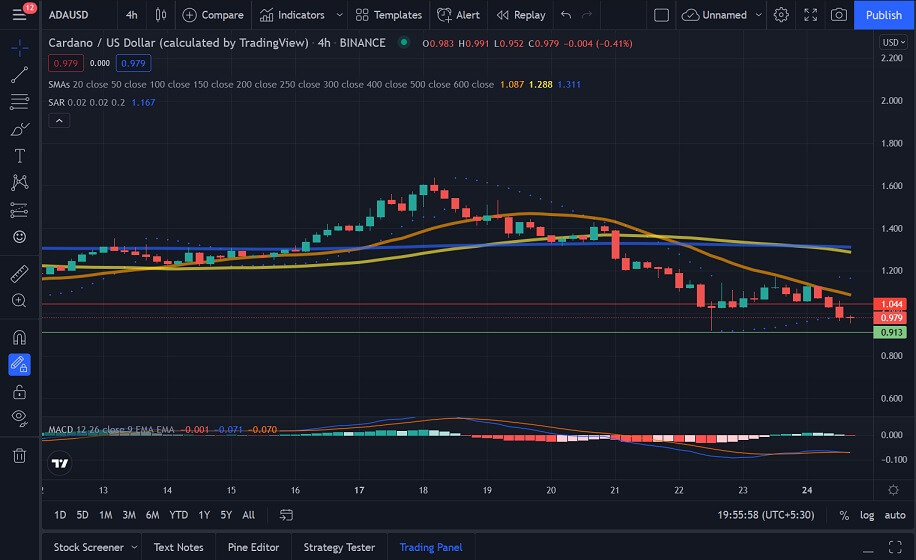 DeFi protocol SundaeSwap recently launched its highly-anticipated mainnet after a series of testing. The DEX, it is believed, would allow users to trade, stake, and lend tokens on the platform for a small fee. However, several users who tried using the platform at its launch said they raised complaints about their inability to perform transactions via the site.

This failure was later revealed to be a result of network congestion on the platform, indicating the level of anticipation and enthusiasm the DEX had caused in the Cardano community. IOHK said:

"Congratulations to @SundaeSwap on their launch today. Due to heavy #Cardano network load, some users may be waiting longer for transactions to complete as a result. This is to be expected around DEX launches & large NFT drops. Thanks for your patience during these busy periods."

Speaking on this, SundaeSwap’s Chief Executive Officer, Mateen Motavaf, explained that the issue is now under control. To further put users at ease, around 1 am after the launch, the App’s team held a Twitter Spaces AMA to address the issues users have been experiencing.

Despite the teething challenges faced during the mainnet launch of SundaeSwap, available data from DeFiLlama has shown that the total value of assets locked in the ecosystem is now worth $82 million, leading to an 86.6% growth of DeFi TVL on the Cardano blockchain in just 24 hours.

Looking at the Cardano price chart, we see that ADA has dropped considerably during the ongoing session. If the current sentiment persists, we could see ADA drop to $0.95 and post a recovery.