The Cardano price registered a slight recovery during the ongoing session as it looks to bounce back after two extremely bearish sessions. Currently, the price is up almost 1% and could go higher. ADA had started the week on a fairly positive note, pushing up by almost 14% on Monday and settling at $1.60. However, the price fell back on Tuesday, dropping almost 9% on Tuesday and then a further 8.29% on Wednesday to settle at $1.33, where the 50-day SMA acted as support.

The Cardano price started the previous week on a fairly bearish note, dropping by almost 4% to $1.12. ADA made a strong recovery from this level, rising almost 6% on Tuesday and then surging by 10.52% on Wednesday to rise to $1.31, where the 20-day SMA was acting as resistance. As a result, ADA fell back on Thursday, drooping over 6% and setting at $1.23. However, the price recovered on Friday, rising over 2% and settling at $1.26. 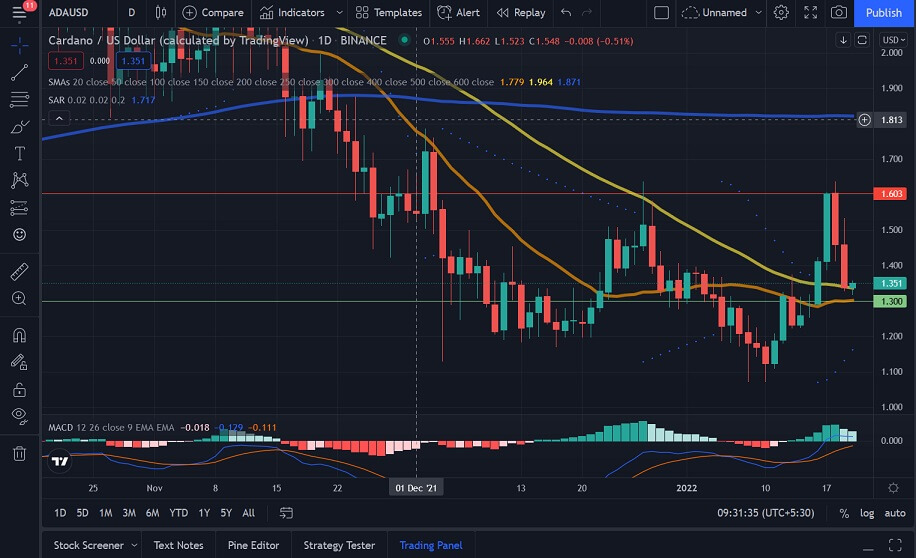 The Cardano price remained bullish over the weekend, pushing above the 20-day SMA on Saturday and then rising over 9% on Sunday, moving above the 50-day SMA and settling at $1.41. The current week started on an extremely bullish note for ADA, as the price surged by almost 14% on Monday, moving to $1.60. However, the price fell back on Tuesday, dropping by almost 9%, and then dropping by $8.29% on Wednesday to drop to $1.33, where the 50-day SMA acted as support. The current session sees ADA up by almost 1%, and with the Parabolic SAR currently bullish, we could see the price rise further.

Looking at IntoTheBlock’s IOMAP for the Cardano price, we can see that ADA has strong support at around $1.25. At this price level, over 254,000 addresses have bought more than 3.6 billion ADA. 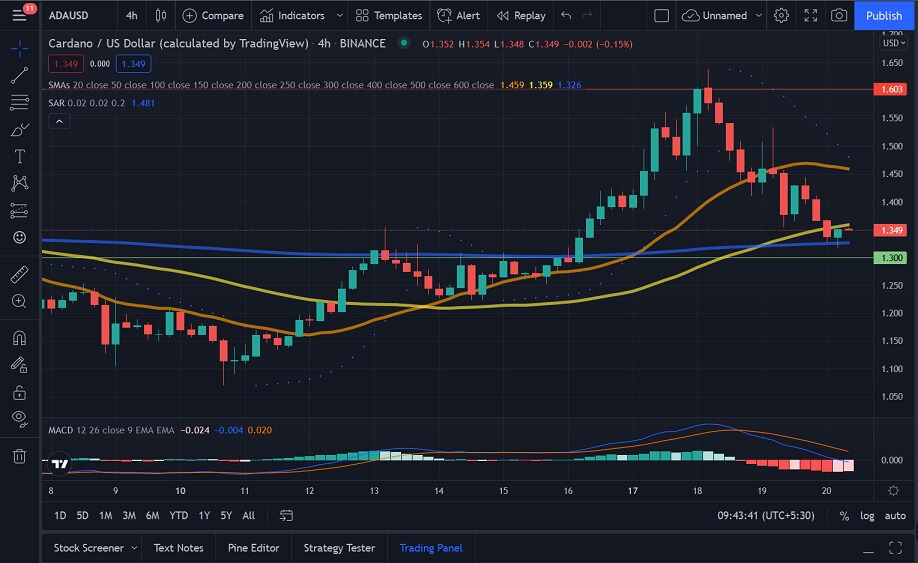 The Cardano Foundation is accelerating decentralized application (DApp) development on Cardano (ADA) with the help of EMURGO. In a new announcement, the Cardano Foundation said they are teaming up with EMURGO, the commercial arm of Cardano, to develop a new set of tools to help developers support, maintain, and accelerate DApp growth within the ADA ecosystem.

“The development of this tool stack, in partnership with EMURGO, will further enable a vibrant, inclusive ecosystem for third-party smart contract development on Cardano. This is the first of a set of open-source architecture we are looking at and are excited to push this forward now. We want to provide tools to and support to the community and to ensure we enable the architects of the future.”

The project is set for two stages, MVP1 and MVP2, to be built, maintained, and implemented by the Five Binaries, a Czech Republic-based infrastructure development company focused on the Cardano ecosystem.

The first stage of the project will involve the development of a modular tool stack which includes a simple backend that will serve as a proof of concept.

For the second stage, Cardano wants to open the floor to Cardano ecosystem devs.

“For the second stage, MVP2, the Cardano Foundation will reach out to different projects and partners from across the ecosystem, publicly inviting them to contribute to the project. At this stage, each pull request to add a new adapter or a backend will be required to follow the programming guidelines of the project, including tests.”

The Cardano price chart shows that ADA has registered a marginal increase during the ongoing session, thanks to the 50-day SMA acting as support. If the current sentiment persists, we could see the price continue to push higher and move past $1.35.