Cardano Price Analysis: ADA Pushes Back To $1.14 After Marginal Recovery

The Cardano price has pushed up during the current session, as ADA looks to move past $1.15. ADA had registered a sharp drop on Friday, falling by nearly 6% and settling at $1.20. The weekend saw ADA remain in the red, falling by 2.23% on Saturday and dropping by 1.02% on Sunday, ending the weekend at $1.17. The current week started with the bearish sentiment prevailing, as ADA dropped nearly 4% to $1.12 before recovering during the current session.

The Cardano price started the previous week on an extremely bearish note, dropping by 4.21%, slipping below the 20-day SMA, and settling at $1.32. ADA continued to drop on Tuesday, falling by 0.83%, and then fell by over 6% on Wednesday, dropping to $1.22 as the bearish sentiment persisted. However, despite the bearish sentiment, ADA was able to recover on Thursday, rising by 4.32% and settling at $1.28. 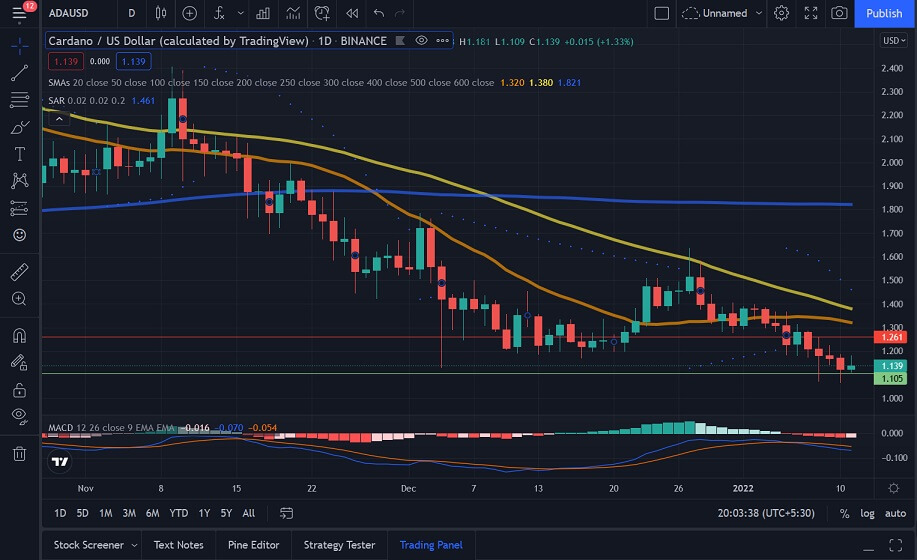 We can see that the MACD is currently bullish, indicating that the price could push higher. However, if the price drops, we could see it flip to bearish.

We can see that the MACD and Parabolic SAR are both bullish, indicating that the price could rise. 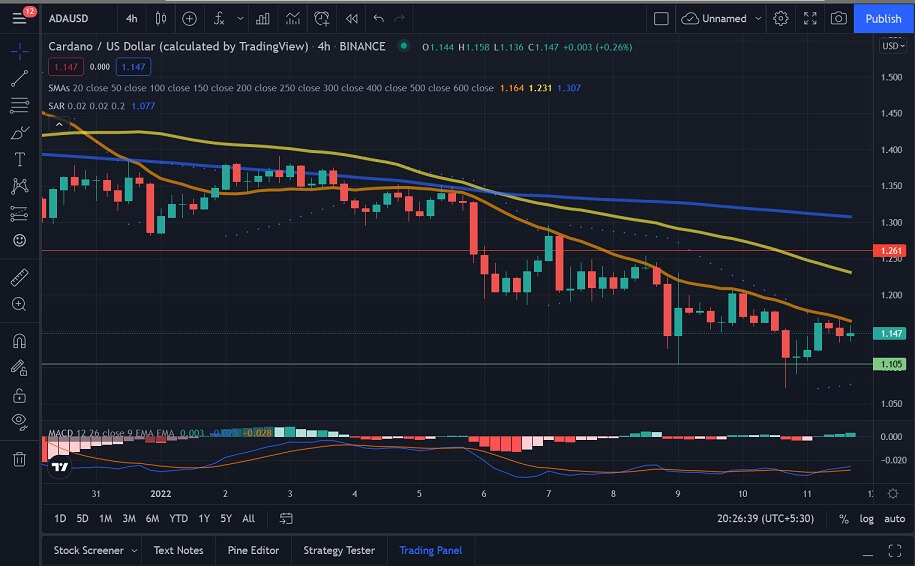 A reforestation effort launched by Cardano has reached its initial goal of planting one million trees “of different species native to areas across different parts of Madagascar, Indonesia, Nepal, Kenya, Senegal and Haiti.”

Frederik Gregaard, the CEO of the Cardano Foundation, shared the news on Twitter. He said:

"What an achievement! The #CardanoForest is 100% funded, we've reached the 1 million trees milestone. The success of this first Cardano Global Impact Challenge for the Cardano Ecosystem truly shows the power of our community."

The CEO pointed out the reforestation effort will support local ecosystem development activities in Mombasa, Kenya. Every tree planted, he added, will be “recorded on the Cardano blockchain for enhanced transparency and serve as public proof of land restoration activities.”

The project is part of a partnership between the Cardano Foundation and cryptocurrency startup Veritree, which uses blockchain technology to record the supply chain of tree plantations for its users, making them verifiable and easily trackable.

Notably, Veritree plants a tree each time an ADA token is exchanged for a TREE token, with the latter being redeemable for non-fungible tokens (NFTs) during specific “redemption days.” The rarity of the NFTs is based on the initial amount of ADA committed.

Looking at the Cardano price chart, we see that ADA has registered a significant increase during the current season. If buyers remain in control, we could see ADA push to $1.15.