Cardano Price Analysis: ADA Pushes Up Marginally After Dropping Over 7% On Tuesday

The Cardano price looks to push up from its current level, as buyers marginally pushed it up during the current session. ADA has been bearish since the previous week, and although the price had picked up marginally on Saturday, it was back in the red on Sunday, as it ended the weekend at $2.04. Monday saw ADA slip below the 20-day SMA before the price dropped by over 7% on Tuesday, dropping to $1.87, where the 200-day SMA acted as support.

The Cardano price started the previous week on a bullish note, as ADA rose by 5.17%, moving above the 20-day SMA and settling at $2.12. ADA continued to push up on Tuesday as the price moved above the 50-day SMA and settled at $2.27. However, after reaching this level, the price fell in the red, as ADA slipped to $2.10, slipping below the 50-day SMA. ADA continued to drop on Thursday, with the price falling by 0.92%, before falling by 1.65% on Friday and settling at $2.04, just above the 20-day SMA. 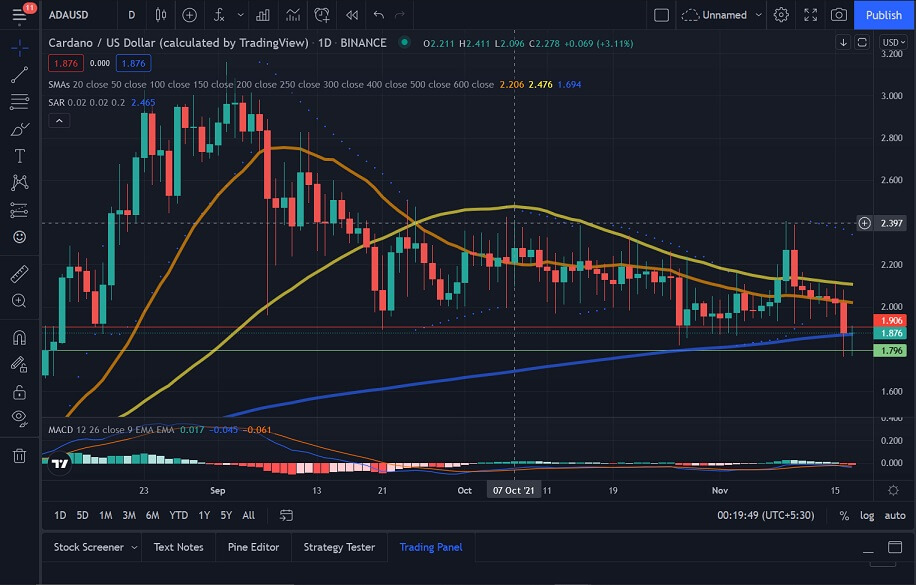 The Cardano price posted a marginal recovery on Saturday, as the price pushed up marginally. However, ADA was back in the red on Sunday, as ADA ended the weekend at $2.04. The current week saw the bearish sentiment persist, as ADA slipped below the 20-day SMA on Monday before dropping by over 7% on Tuesday and settling at $1.87.

The current has seen a slight recovery. However, the MACD and Parabolic SAR are bullish, indicating that the price could drop further.

Looking at IntoTheBlock’s IOMAP for the Cardano price, we can see that ADA faces strong resistance at around $1.90. At this price level, over 114,000 addresses have sold more than 4.6 billion ADA.

We can see that the Parabolic SAR and MACD are both bearish, indicating that the price could drop further during the current session. 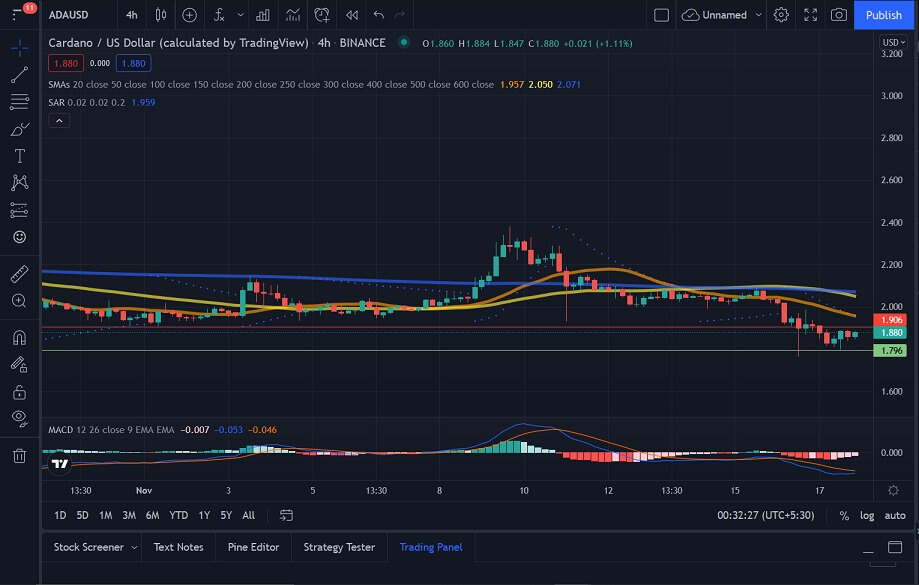 Blockchain firm Odin has partnered with OKEx and Cardano to provide multiple benefits for the users on the Odin platform. The firm has been busy lately forging partnerships with strategic significance to the project and the efficiency of the protocol. By partnering with OKEx, users can use more advanced trading options, such as spot, margin, and futures trading. They can also trade options on OKEx DEX, which provides new options in the decentralized markets.

The partnership appears to have transferred Odin into a multichain platform and boosted its performance, security, and reliability. Multichain usage ensures network scalability as a private protocol by limiting the data exchanged every block, reducing irrelevant data, and enhancing transaction speed.

Cardano is a low-fee blockchain that can handle transactions and smart contracts without a lot of overhead. Its dual-layer architecture separates computing tasks from settlement procedures, allowing each layer to handle the increased workload. Currently, the blockchain can sustain up to a whopping 1 million transactions per second (TSP). Visa and Mastercard can sustain about 5000 transactions per second (TSP), making Cardano (ADA) ready for mass adoption and implementation.

OKEx is a cryptocurrency exchange with advanced financial services. The exchange relies on blockchain technology to provide everything users need for wise trading and investment.