The Cardano price registered a marginal drop during the current session, with ADA down by a little over 1% at the time of writing. ADA had been quite bullish earlier and had registered an increase of 1.099% on Thursday, rising to $1.47. The price fell back on Friday, dropping by over 5% and settling at $1.39. The weekend saw ADA back in the green, rising by over 4% and settling at $1.45 before falling back during the current session.

The Cardano price was in the red going into the previous weekend, dropping by 1.61% on Friday. ADA recovered over the weekend, rising by nearly 2% on Saturday and then registering a marginal increase on Sunday to end the weekend at $1.24. Monday saw ADA register a marginal drop before rising by 3.47% on Tuesday and settling at $1.28. ADA continued to push up on Wednesday, rising by 3.67% and settling at $1.32. 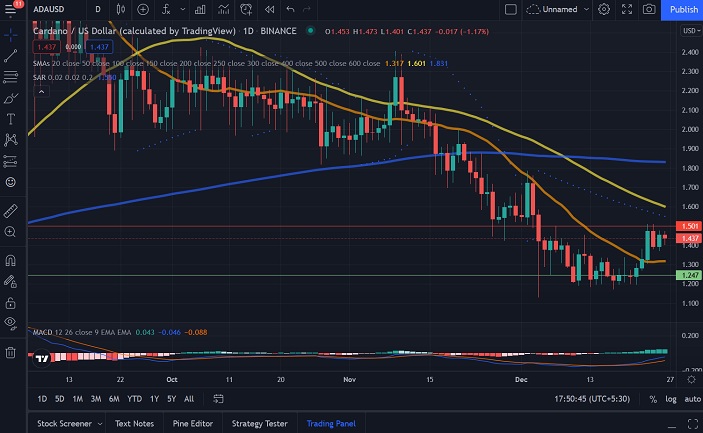 After settling at $1.32 on Wednesday, the Cardano price registered a significant increase on Thursday, rising by nearly 11%, moving above the 20-day SMA and settling at $1.47. The price fell back on Friday, falling by 5.43% and dropping to $1.39, before rising by over 4% on Saturday and settling at $1.45. The current session sees ADA back in the red, as sellers look to push the price to $1.40.

Looking at IntoTheBlock’s IOMAP for the Cardano price, we can see that ADA has strong support at around $1.24. At this price level, over 220,000 addresses have bought more than 4.5 billion ADA. 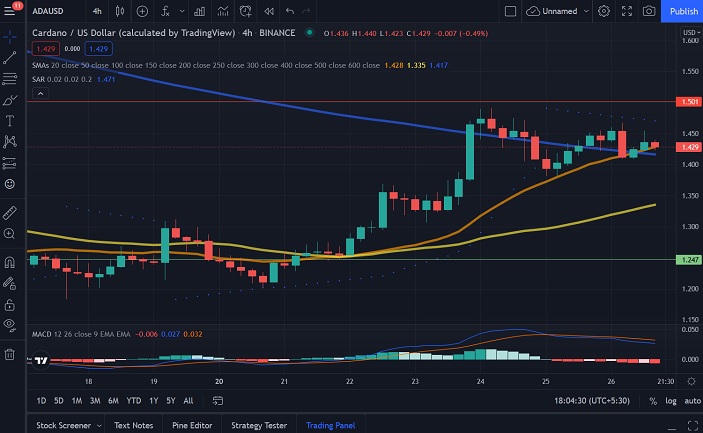 Cardano founder Charles Hoskinson recently took to Twitter to share an update from COTI, whose devs are building Djed stablecoin together with IOG on Cardano.

"As we are getting closer to the launch of Djed stablecoin, we are pleased to share some updates on the development and progress of:

The COTI dev team unveiled details on the present implementation of Cardano’s Plutus for Djed. They are working on main contracts that will help provide oracle exchange rates, enable users to submit multiple orders simultaneously, cancel pending orders, etc. The developers are currently testing this implementation.

According to them, a pre-released version will be delivered over the next several days for UI integration. Djed is a stablecoin that will utilize smart contracts to maintain a base coin reserve in an autonomous bank that will also operate using smart contracts. This will allow users to trade stablecoins and use them for DeFi-based transactions.

Djed will be first pegged to the USD but be compatible with other traditional currencies. IOG promotes Djed as the first stablecoin that is “formally verified.”

The Cardano price chart shows that ADA has registered a reasonably significant drop during the current session. If the current bearish sentiment persists, ADA could drop to $1.40.