The Cardano price is currently up by over 6%, as buyers look to push the price over $1.40, with ADA on a very bullish run since Tuesday. ADA had dropped by 6.09% on Thursday, falling to $1.23. The price recovered on Friday, rising by nearly 5% and moving to $1.28. With the 20-day SMA acting as resistance, ADA was only able to register a marginal increase on Saturday before surging during the current session, pushing above the 20 and 50-day SMAs.

The Cardano price was quite bearish over the previous weekend, dropping by nearly 6% on Friday. ADA continued to drop over the weekend, falling by 2.23% on Saturday and then dropping by 1.02% on Sunday to end the weekend at $1.17. The week started with the bearish sentiment persisting, as ADA fell by almost 4% on Monday. However, the price made a strong recovery on Tuesday, rising by nearly 6% and settling at $1.18. Wednesday saw an even more significant increase, as ADA pushed up by almost 11%, rising to $1.31. 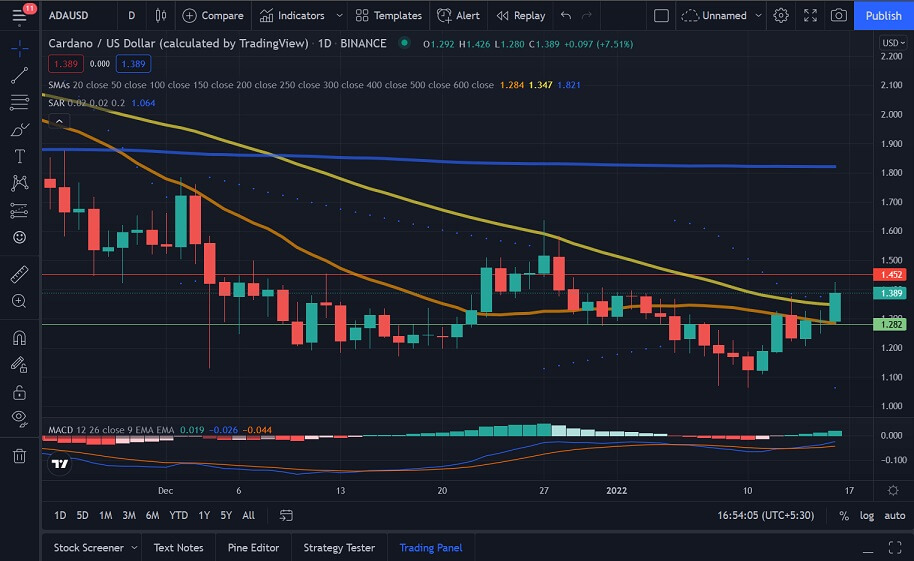 Wednesday saw the Cardano price increase to $1.31, but with the 20-day SMA acting as resistance at this level, the price fell back, dropping over 6% on Thursday and settling at $1.23. ADA recovered on Friday, rising nearly 5% and then registering a marginal drop on Saturday to settle at $1.29. However, ADA surged during the current session, going past the 20 and 50-day SMAs and settling at $1.38.

Looking at IntoTheBlock’s IOMAP for the Cardano price, we can see that ADA has strong support at around $1.28. At this price level, over 348,000 addresses have bought more than 6 billion ADA. 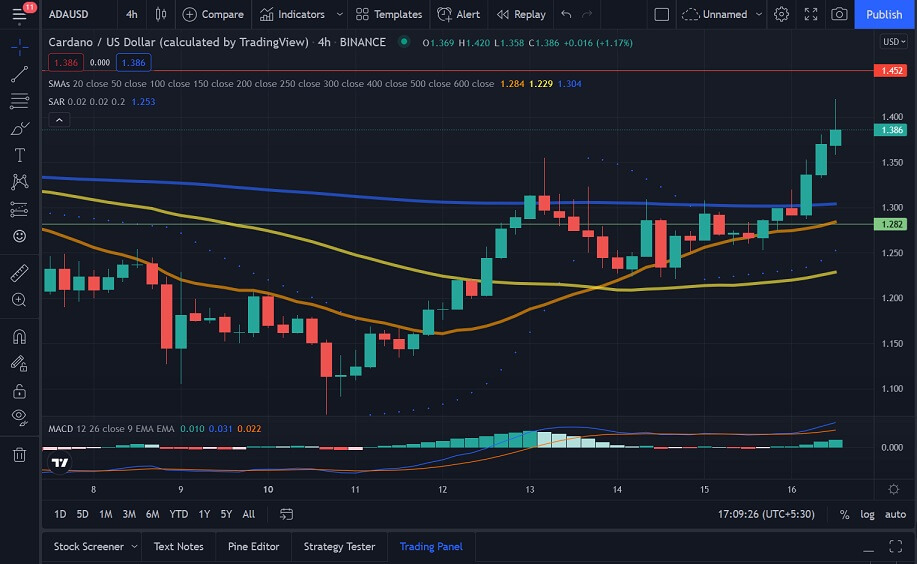 Cardano Beats Solana And Bitcoin As Most Preferred Ethereum Alternative

Cardano has emerged as the most preferred ETH alternative for transactions and savings by crypto users around the globe. This is according to a recent Twitter poll conducted by Ethereum co-founder Vitalik Buterin asking which cryptocurrency Ethereum users would prefer if they woke up in 2035, and 80% of all transactions plus savings in the world are in one currency that is not ETH.

In the first Poll, Buterin mentioned Bitcoin, Cardano, Solana, and USD. In a moment of truth for Bitcoin and Solana users, Cardano emerged as the most preferred cryptocurrency receiving 42% in upvotes compared to Bitcoin’s 38% and SOL’s 13.1%. Only 6.5% of his followers believe USD will still be in place in 2035.

In the Second poll, Tron emerged as the most desired cryptocurrency reaping 51% of the votes followed by BNB at 28%. NEO followed closely with 21.8%, with CNY getting a 4.1% upvote.

The tweet sparked a lot of reactions, with most responders shilling their projects. Dogecoin’s promoter Matt Wallace expressed his disappointment at Vitalik for not including the meme coin in the poll hours after Tesla added DOGE as a payment option for its merchandise.

“The ironic thing is that Dogecoin actually is the future crypto of earth even though it is not even an option in this poll.”

Others like Tron’s founder Justin Sun and Anndy Lian preferred to take a center ground, pushing for the co-existence of various coins.

Looking at the Cardano price chart, we can see that ADA has been quite bullish in recent sessions and has seen a significant increase during the ongoing session. If the current sentiment persists, we could see ADA push to $1.40.