The Cardano price has registered a marginal recovery during the ongoing session, with ADA up by just over 1%. ADA had slipped below the 20 and 50-day SMAs on Friday, dropping by nearly 6% to $1.26. Friday saw ADA crash over 11%, with the price dropping to $1.12. Saturday saw a significantly volatile session as the price dropped to $1.07, managing to stay above $1 and pushing to $1.09 during the ongoing session.

The Cardano price started the previous weekend on a fairly positive note, rising by 2.19% on Friday. ADA remained bullish over the weekend, rising by 2.54% on Saturday and surging by 9.29% on Sunday, pushing above the 20 and 50-day SMAs and settling at $1.41. The week started with the bullish sentiment persisting, as ADA surged by over 13% and settled at $1.60 on Monday. However, after reaching this level, ADA turned bearish, and the price slumped by nearly 9% on Tuesday, dropping to $1.45. 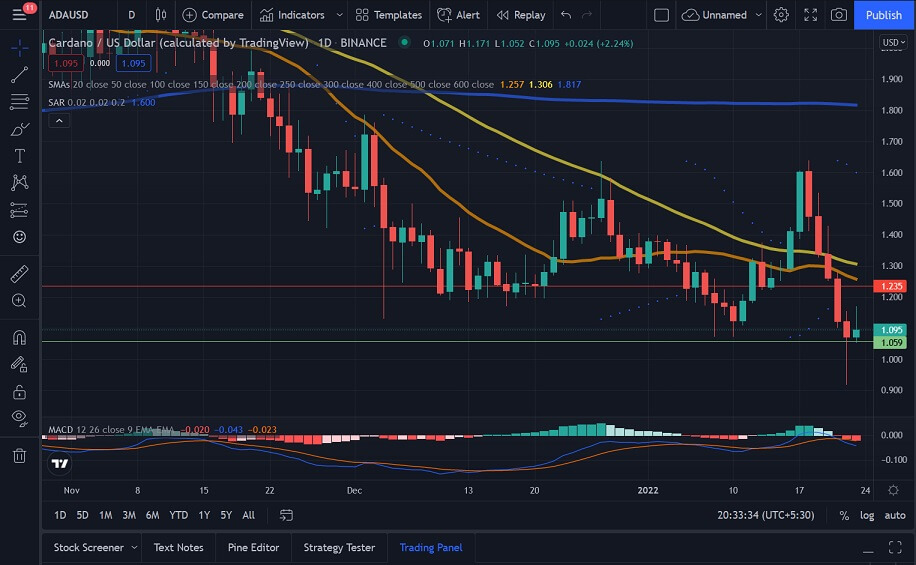 The Cardano price continued to drop on Wednesday, as it fell over 8% and settled at $1.33, where the 50-day SMA acted as support. However, Thursday saw ADA slip below this level, as it went below the 20 and 50-bar SMAs and settled at $1.26. Friday saw a rather significant drop, as ADA fell by 11.03% and settled at $1.12, before dropping a further 4.46% on Saturday and settling at $1.07. The current session has seen a marginal recovery, as buyers look to push ADA towards $1.15.

The MACD and Parabolic SAR are both currently bullish, indicating that we could see the price push higher. 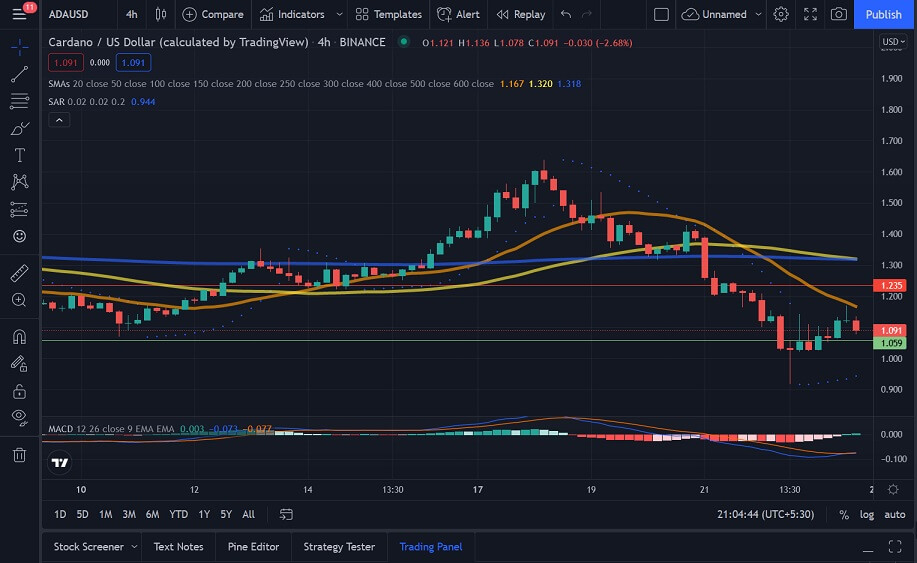 The Cardano network recently launched Pavia, a gaming application on the Metaverse. This stands as the first metaverse project operated on the Cardano blockchain. The use of non-fungible tokens (NFTs), which work with the same blockchain technology as cryptocurrencies, is increasing. They enable investors to get tokenized assets of their favorite art items, idols, places, etc. NFTs create representations of both tangible and non-tangible items.

According to its design, Pavia has about 100,000 land parcels issued. Each land parcel’s minting is a non-fungible token, NFT, that possesses individual coordinates. The pre-selling of the parcels kick-off since 2021 with more than 60% done between October and November. Also, there is a rush for the remaining portions which will be on sale within the first quarter of 2022.

Pavia’s native token is an in-game asset. Pavia native tokens were airdropped to NFT landholders after the blockchain’s snapshot in December 2021. Furthermore, Pavia landowners are more than 8,300. The data has it that the users were unable to deploy assets over their land on Monday. Caution documents from Pavia have warned customers that they can neither visit nor deploy content to the plots. This was due to the development stage of the land parcels.

The emergence of Pavia on Cardano is during the period of incredible carvings for virtual parcels of land. Presently, the sale of virtual plots of land runs into millions of dollars on several blockchains such as Ethereum. The value for land plats on Pavia runs as huge as 30,000 Cardano on CNFT, the Cardano NFT marketplace.

Looking at the Cardano price chart, we can see that ADA has recovered during the current session and is presently up by almost 2%. If the current sentiment persists, we could see ADA push to $1.15.