Cardano Price Prediction: ADA Back In The Red After Bullish Weekend

The Cardano price found itself back in the red during the current session, as it got off to an extremely bearish start to the current week. ADA had dropped on Friday as well, registering a drop of 1.69% that saw ADA fall to $1.21. The weekend saw ADA pick up considerably, rising by almost 2% on Saturday and settling at $1.24 before a highly volatile session on Sunday took the price to an intraday high of $1.33 before dropping to $1.24. The current session sees ADA back in the red, with the price currently at $1.22.

The Cardano price was extremely bullish when it started the previous weekend, registering an increase of over 11% on Saturday and moving to $1.35. However, the price fell back in the red on Sunday, as it registered a marginal fall. However, Monday saw ADA drop significantly, as the price fell by over 9% and settled at $1.22. Despite the bearish start to the week, ADA was back in the green on Tuesday, rising by 3.59% and settling at $1.26, before another increase of 3.47% saw ADA move to $1.31 on Wednesday. 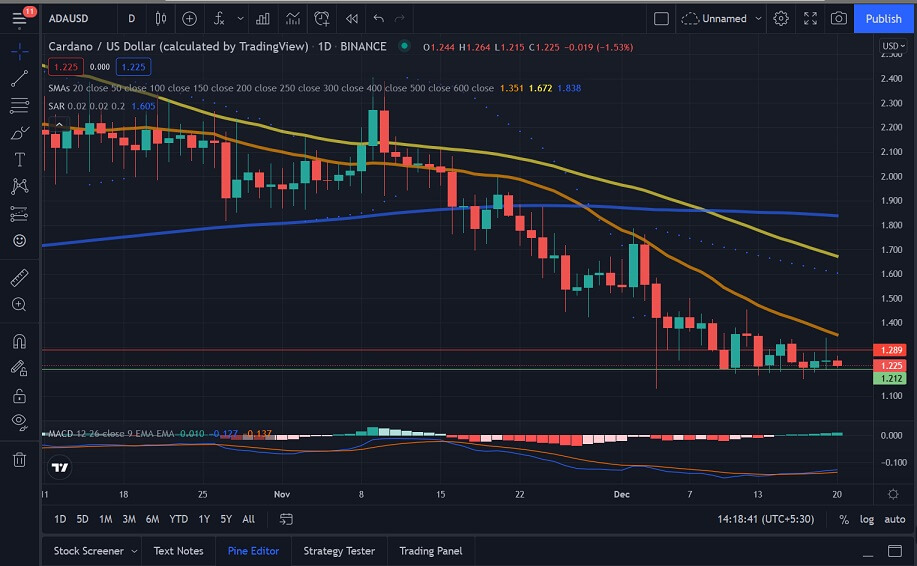 After rising to $1.31 on Wednesday, the Cardano price fell significantly on Thursday, dropping by 5.49% and settling at $1.24. The price continued to drop on Friday, falling by 1.69% and settling at $1.21. However, ADA recovered over the weekend, pushing up by 1.97% on Saturday and settling at $1.24 before registering a marginal increase on Sunday after a highly volatile session. The current session sees ADA back in the red, as sellers look to push the price to $1.20. We can see that the Parabolic SAR is currently bearish, indicating that the price could drop further.

Looking at IntoTheBlock’s IOMAP for the Cardano price, we see that ADA faces strong resistance at around $1.28. At this price level, over 247,000 addresses have sold more than 4.5 billion ADA.

We can see that the MACD has already flipped to bearish, and if the price drops further, we could see the Parabolic SAR flip to bearish as well. 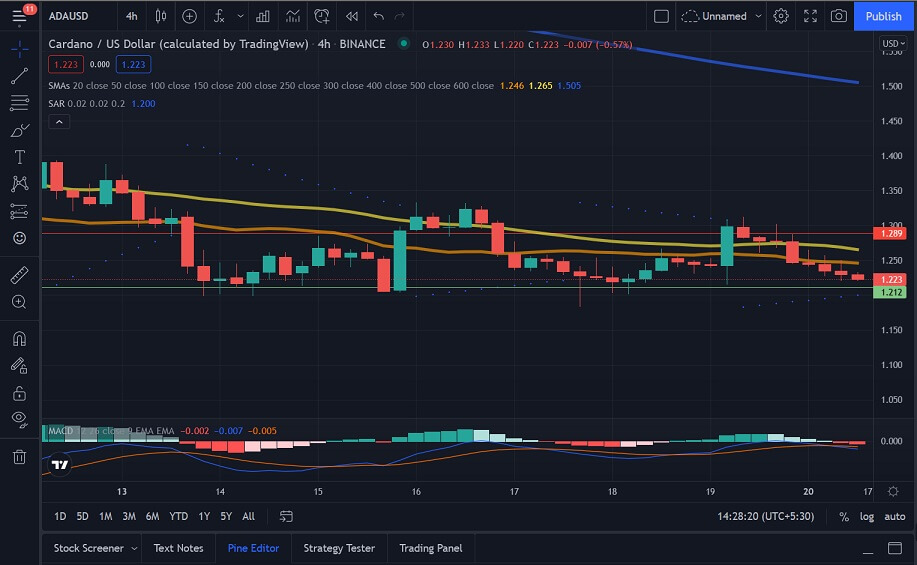 Looking at the Cardano price chart, we see that ADA has gotten off to a fairly bearish start to the week. If the current sentiment persists, we could see ADA drop to $1.20.