Cardano Price Prediction: ADA Continues To Drop, Could Slip Below Support Level Of $1.60

The Cardano price has registered a sharp drop during the ongoing session, as sellers continue to dominate the markets. ADA had slipped below the 200-day SMA on Sunday, falling to $1.83. Monday saw a further drop, with ADA dropping to $1.77 after falling by over 3%. Tuesday saw more of the same, with the price dropping by 1.54% and settling at $1.75. The current session (Wednesday) sees the price currently down by over 6% at $1.63.

The Cardano price had started the previous week in the red, slipping below the 20-day SMA after registering a marginal drop. Tuesday saw a much more significant drop as ADA fell by over 7%, settling just below the 200-day SMA at $1.87. After making a marginal recovery on Wednesday, ADA fell below the 200-day SMA on Thursday, dropping to $1.78 after registering a fall of almost 5%. However, Friday saw the price recover, as ADA pushed up by 4.28% and settled at $1.86. 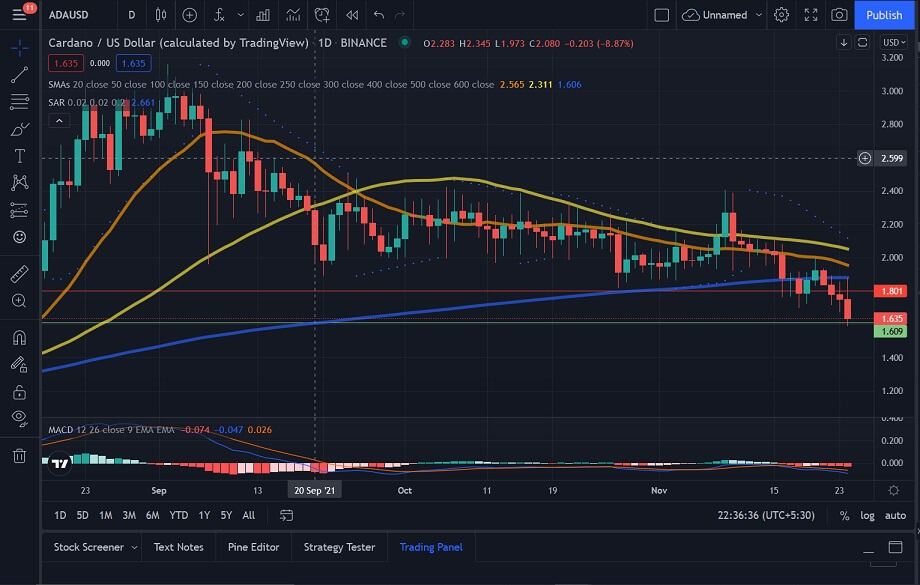 After pushing to $1.86 on Friday, the Cardano price continued to push up on Saturday, moving above the 200-day SMA and settling at $1.92. However, Sunday saw ADA fall back into the red, falling by 4.55%, slipping back below the 200-day SMA and settling at $1.83. The current week started with the bearish sentiment dominating, as the price fell by over 3% on Monday. Tuesday saw a drop of 1.54%, with the price dropping to $1.75. Wednesday sees the price currently down by almost 7%, as sellers look to push ADA below $1.60.

Looking at IntoTheBlock’s IOMAP for the Cardano price, we can see that ADA faces strong resistance at around $1.80. At this price level, over 209,000 addresses have sold more than 3 billion ADA. 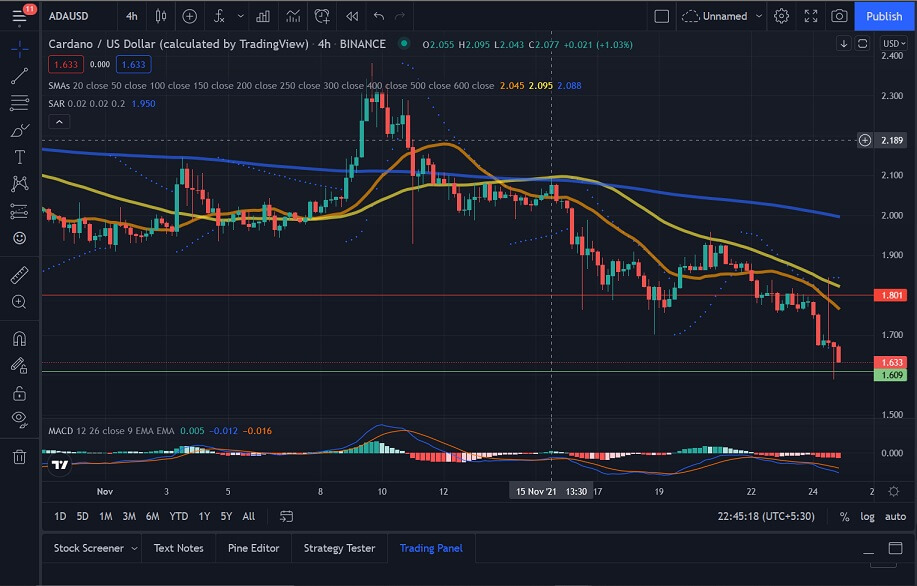 eToro recently announced it would be “limiting ADA and TRX” for users based in the US due to regulatory issues. These users would “no longer be able to open new positions in, or receive staking rewards for, Cardano (ADA) and TRON (TRX)” but would be “able to close existing positions.”

Users based in the US will not be able to open new $ADA or $TRX positions starting on 26 December 2021. They cannot enjoy staking rewards for $ADA and $TRX since staking support for these two assets will end on 31 December 2021. Final rewards (in USD) will be paid out on 15 January 2022.

US-based users based can maintain their existing $ADA and $TRX balances on the exchange. They can also close their positions (sell their $ADA or $TRX holdings for USD). However, sometime in Q1 2022, eToro will also limit the selling of such holdings. The platform is trying to make the eToro Money crypto wallet compatible with $ADA and $TRX.

This unexpected move by eToro forced Hoskinson to take to YouTube to clarify some confusion. He said that financial regulators had not contacted the Cardano Foundation or IOHK about $ADA. eToro’s move is the result of a lack of regulatory clarity around crypto-assets. Hoskinson noted that it is unfortunate that eToro felt it had to take this action.

He added that this would not affect ADA because it is one of the most liquid crypto-assets in the market, and eToro was not handling a huge amount of $ADA trading volume.

Looking at the Cardano price chart, we see that ADA has registered a significant fall during the current session. If the current sentiment persists, we could see ADA drop below $1.60.