The Cardano price entered the previous weekend on a bearish note, dropping by over 5% on Friday. ADA recovered over the weekend, rising by over 4% on Saturday and then registering a marginal increase on Sunday to end the weekend on a positive note at $1.45. Monday saw ADA continue to rise, with the price moving to $1.51. However, after reaching this level, ADA turned bearish, dropping by nearly 8% on Tuesday and settling at $1.39. 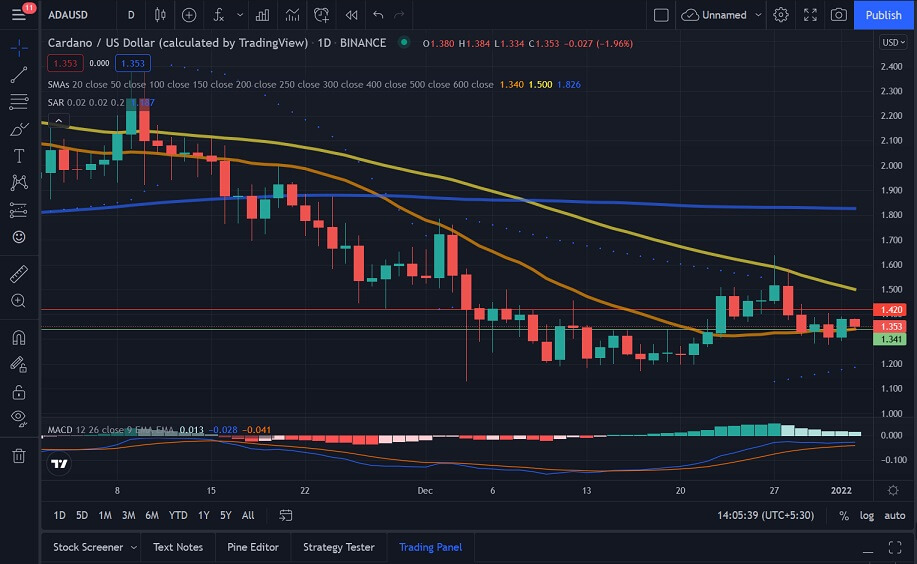 We can see that the Parabolic SAR is currently bullish, indicating that the price could recover.

IntoTheBlock’s IOMAP for the Cardano price shows that ADA has strong support at around $1.34. At this price level, over 290,000 addresses have bought more than 5 billion ADA.

We can see that the MACD and Parabolic SAR are both bullish, indicating that the price could push higher thanks to strong support. 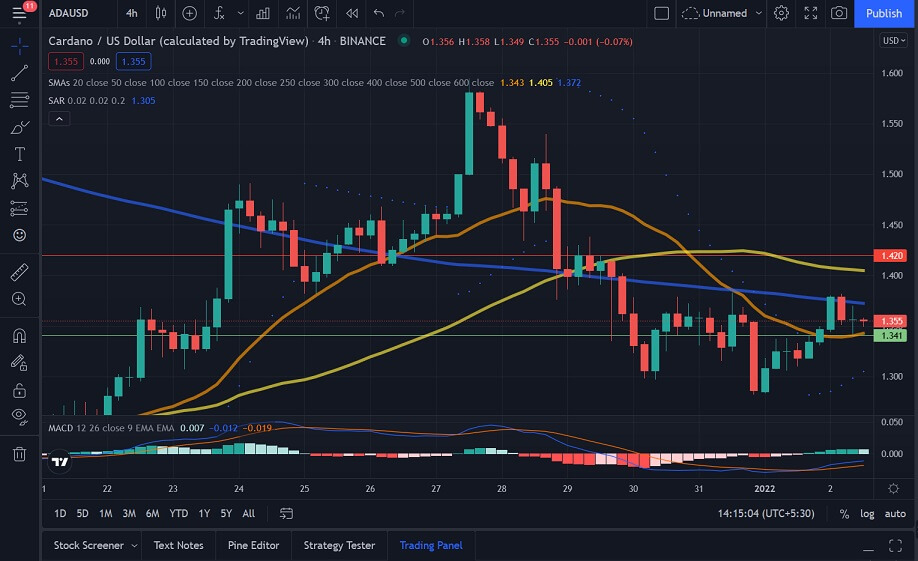 Cardano Has A Community – Charles Hoskinson:

In a recent YouTube video, Charles Hoskinson highlighted the rapid growth of the Cardano ecosystem while clarifying the concerns raised by other members of the crypto community over the past year.

While speaking on the government's perception of cryptocurrencies, he said:

“We live in a world where arbitrary groups of people get to be fact-checkers and decide what's legitimate.”

He pointed out that most financial crimes are done with the US dollar or other fiat currencies. According to Hoskinson, the growth of the crypto ecosystem this year might be slower than 2022:

“It's hard to argue with the $2.5 trillion industry and imagine where that's going to go. I think we're just going to digest as an industry the consequences for better or worse of becoming so big so quickly.”

He also highlighted the need to change Silicon Valley’s “bizarre mantra of move fast and break things” in crypto, which caused losses of $10.5 billion in the decentralized finance (DeFi) space in 2021. Stressing on Cardano’s slow and methodical approach, Hoskinson said:

“That is why VCs do not even actually understand that Cardano has a community. They think it is just me behind a microphone.”

Hoskinson also said that Cardano will gradually transition into a permanent open source project and compared it to Linux operating system. He hopes to move away from a hierarchical structure to open-source DApps developed by the members of the Cardano community.

Cardano Has Most Github Activity In 2021

The platform tracks development data from thousands of public Github repositories, except “non-developer events,” such as commit comments, individuals following an issue, release downloads, and others to avoid inflated data.

Ethereum and Gnosis come in at 4th and 5th, respectively, in the list. While development efforts have little to no effect on short-term market trends, they may be an excellent sign of a project’s long-term growth as they show commitment to the project roadmap over the long term.

Additionally, Santiment recorded the number of active contributors to a specific project’s Github repository to understand their “developer network” and “pure” development efforts. Notably, Cardano also leads the projects with the highest number of active Github contributors during the last 12 months.

However, although the top ranks have remained unchanged, Cardano has risen to prominence over the last year, with an average of 53 daily contributions to its Github repo.

The Cardano price chart shows us that ADA has dropped during the current session. However, ADA has strong support at $1.34 and could recover from this level, pushing towards $1.40.