The Cardano price fell back in the red as ADA failed to push to $1.10, instead of dropping by nearly 2% and falling to $1.07 during the ongoing session. ADA had ended the weekend on a bearish note, registering a drop of over 2% and falling to $1.03. On Monday, the price recovered, rising by 1.54% and moving to $1.05, before pushing up by over 4% on Tuesday and settling at $1.09. The current session sees ADA down by nearly 2%, as sellers look to drive the price lower.

The Cardano price got off to a fairly bearish start to the previous weekend, dropping by over 4% on Saturday and settling at $1.07. However, the price recovered on Sunday, rising by over 5% and ending the weekend at $1.12. ADA fell back in the red on Monday, dropping by 5.24$ and then registered a fall of 2.25% on Tuesday, dropping to $1.04. Wednesday saw ADA post a fairly strong recovery, as the price rose by over 3% to $1.07 before dropping back on Thursday and falling to $1.04. The price recovered on Friday, registering a marginal increase of 0.48%. 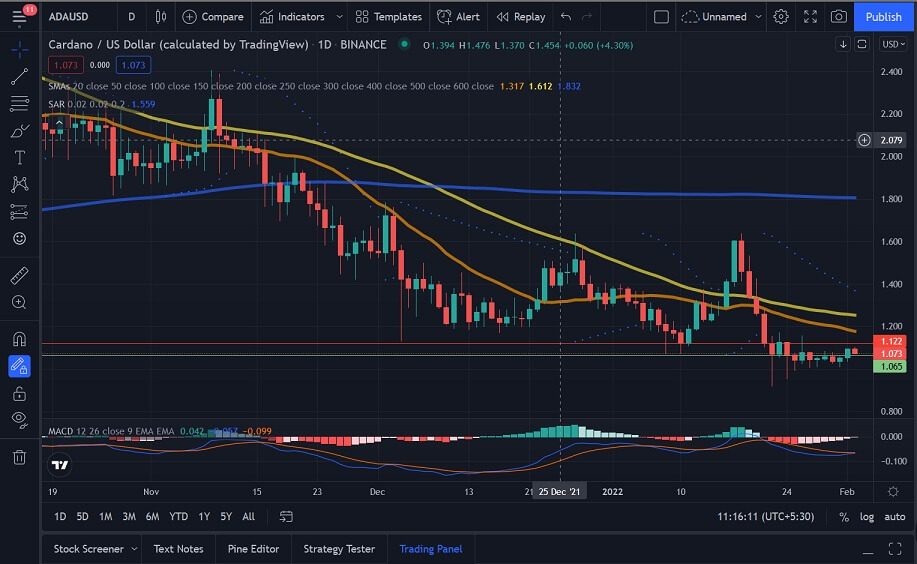 The Cardano price managed to start the weekend on a positive note, as it rose by 1.05% on Saturday, settling at $1.06. However, the price fell back on Sunday, dropping by over 2% and ending the weekend at $1.03. ADA made a fairly strong start to the current week, as it rose by 1.54% on Monday, pushing up to $1.05. Tuesday saw ADA continue to push higher, as the price rose by over 4% and moved to $1.09 before dropping back during the ongoing session.

Looking at IntoTheBlock’s IOMAP for the Cardano price, we can see that ADA has strong support at around $1.06. At this price level, over 183,000 addresses have bought more than 4.9 billion ADA. 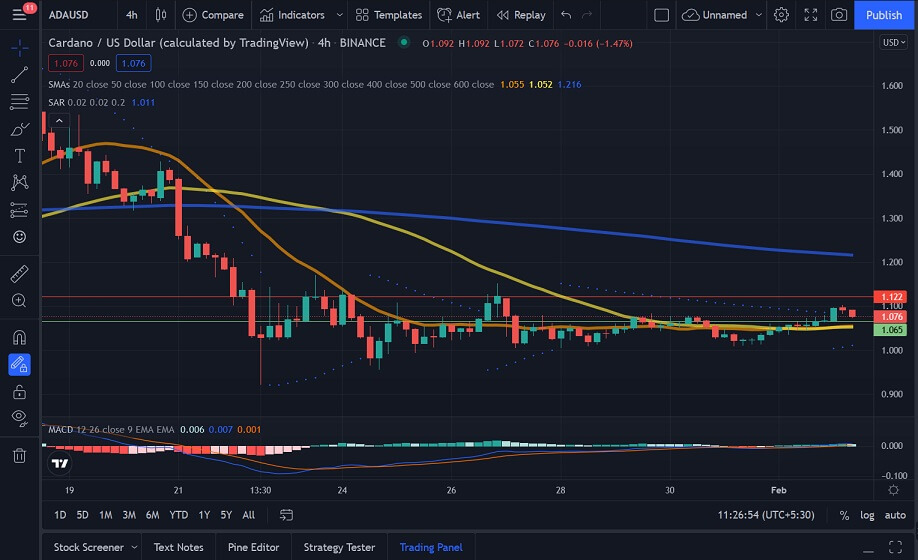 Cardano Block Size To Increase By 11%

Cardano developer Input Output recently announced that the blockchain’s block size is on track to increase by 11% as part of its network optimization efforts. The firm said:

"NETWORK UPDATE: Today, we have proposed the next parameter update as we continue to increase #Cardano network capacity in line with the plan. The proposal will increase block size by a further 8KB taking it from 72KB to 80KB."

The total block size will grow to 80 kilobytes (KB) from the current size of 72 kilobytes (KB). This means that Cardano’s blocks will be able to carry more transactions. With a growing number of projects launching on the mainnet, the blockchain has to process more traffic.

Last month, blockchain load spiked to 90% due to increasing adoption, highlighting an urgent need for scaling up the network. On Feb. 1, nearly all blocks remained full, with the average load remaining above 85%, according to data provided by Cardano Blockchain Insights.

On top of that, Plutus memory limits would be raised to 14 million units per transaction from 12.5 million. Per earlier reports, the previous increase took place in January. The recent enhancements will come into effect on Feb. 4. They will allow Cardano-based decentralized applications (dApps) to run more smoothly amid growing demand.

Input Output will “carefully monitor” overall network health before further adjustments. Cardano has already moved to “Basho,” the third stage of the roadmap. The team is currently focused on optimizing the network for a growing number of users.

Looking at the Cardano price chart, we can see that ADA had made a fairly strong start to the week but had dropped back during the ongoing season. If the current sentiment persists, we could see ADA drop to $1.05 before recovering.