Cardano Price Prediction: ADA Drops Back Below $1.50 During Current Session

The Cardano price fell back during the ongoing session, as sellers pushed the price below $1.50. ADA had registered a significant drop on Friday as well, dropping by 5.43% and settling at $1.39. The weekend saw ADA make a strong recovery, rising by over 4%, before registering a marginal increase on Sunday to end the weekend at $1.45. Monday saw the price cross $1.50, rising to $1.51 before dropping back during the current session.

The Cardano price started the previous weekend on a fairly bullish note, rising by nearly 2% on Saturday and then registering a marginal increase on Sunday to end the weekend at $1.24. On Monday, the price fell back, registering a marginal drop, before rising by 3.47% on Tuesday and settling at $1.28. ADA moved to $1.32 on Wednesday, pushing above the 20-day SMA and settling at $1.32, before a sharp surge of 10.99% on Thursday saw the price rise to $1.47. 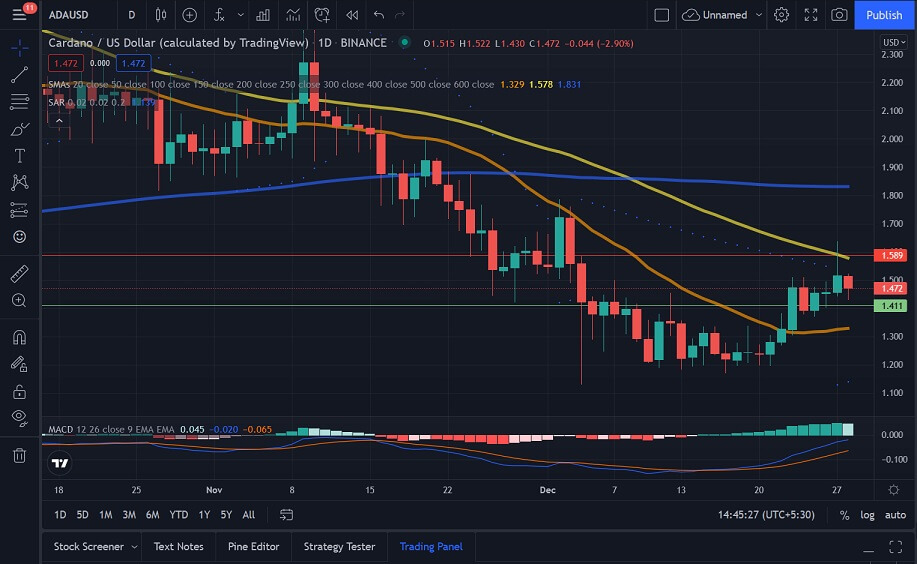 After rising by nearly 11% on Thursday, the Cardano price fell back on Friday, dropping by over 5% and settling at $1.39. The weekend saw ADA make a strong recovery, as the price rose by 4.30% on Saturday and then moved to $1.45 on Sunday, ending the weekend on a bullish note. The bullish sentiment persisted on Monday, as ADA moved past $1.50, settling at $1.51, before dropping back during the current session.

We can see that the Parabolic SAR is still bullish, but if the price continues to drop, we could see it flip back to bearish.

Looking at IntoTheBlock’s IOMAP for the Chainlink price, we can see that LINK has strong support at around $1.44. At this price level, over 123,000 addresses have bought over 3.6 billion ADA. 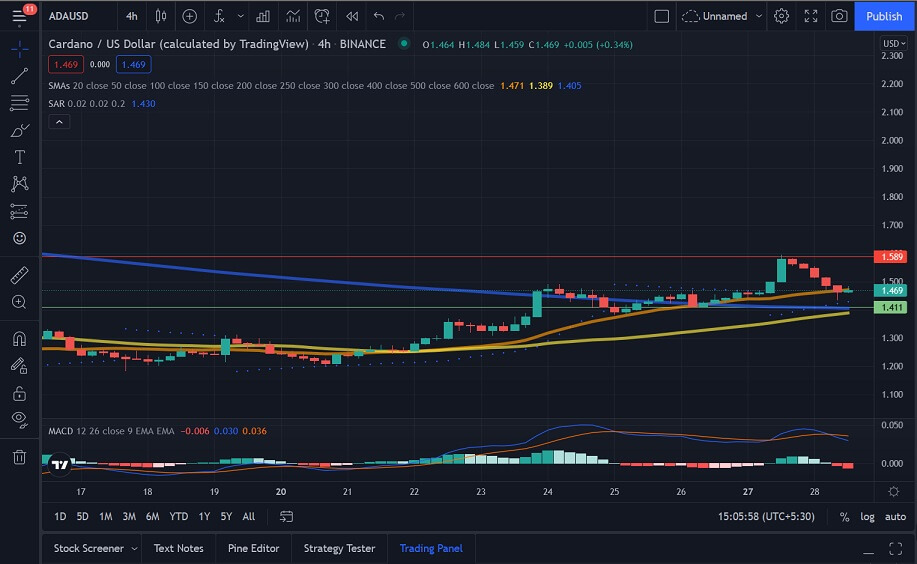 Cardano founder Charles Hoskinson has projected that due to a poor level of engineering, most decentralized finance (DeFi) projects will be extinct in the next five to ten years.

Speaking during a YouTube live session, Hoskinson stated that many projects in the space rely on “a hope and a prayer” mindset instead of focusing on rigorous engineering, and consequently they won’t stand the test of time.

According to the Input-Output boss, the current DeFi projects can be considered low quality, an aspect that is wearing down users. He noted that the low quality of the projects is evident by the total value of hacks in the sector in 2021 alone while singling out the Ethereum space for having key weak points that contributed to almost $10.5 billion in losses.

“Unfortunately, many of the projects in this space will not stand the test of time. We will see a great extinction occur in the next five to 10 years, the reason you do things right, is so that you can be around for that extinction event. Many of you are tired of the incredible cost, the lack of clarity and the low production quality of applications in the DeFi space.”

Hoskinson added that the current DeFi ecosystem is a survival for the fittest, and Cardano is evolving to set up a system that will build on current shortcomings. To enhance, the mathematician stated that Cardano is focusing more on factors like certification standards and exploring a public-private partnership.

During the session, Hoskinson also introduced the Cardano DeFi Alliance (CDA) that includes various players currently developing on the Cardano blockchain. The overall goal of the alliance is to create a “robust and dynamic” DeFi ecosystem that will set the standard for the entire DeFi industry to follow.

Looking at the Cardano price chart, we see that ADA has slipped below the $1.50 level during the ongoing session. If the current sentiment persists, we could see the price drop to $1.40.