Cardano Price Prediction: ADA Drops Back Into The Red After Marginal Recovery On Monday

The Cardano price was back in the red during the ongoing session, as the price fell to $1.38. ADA had been extremely bearish over the weekend, after dropping by over 9% on Friday. ADA continued to drop over the weekend, falling by over 8% on Saturday and settling at $1.42. The bearish sentiment continued on Sunday, as the price dropped by almost 3%, ending the weekend on a bearish note. The price pushed up on Monday, rising by 3.04% and settling at $1.42.

The Cardano price entered the previous weekend on a mildly positive note, as ADA pushed up by 0.54% on Saturday and then by 3.28% on Sunday to end the weekend on a bullish note. The price pushed up marginally on Monday but fell back on Tuesday, dropping by almost 3% and settling at $1.55. On Wednesday, ADA managed to stay in the red, registering a marginal drop, before registering a stunning rally that saw the price push up by over 11% to $1.72 on Thursday. 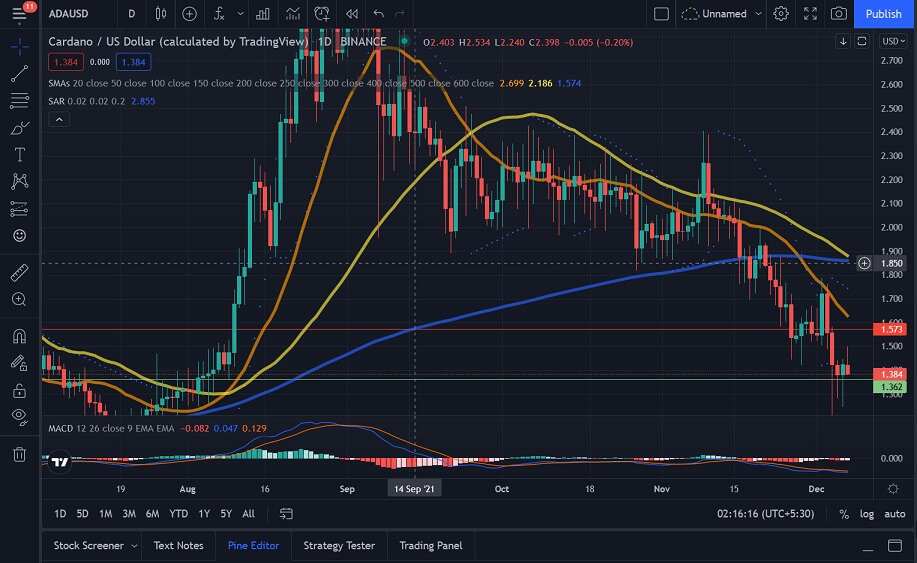 After rising to 1.72% on Thursday, the Cardano price fell back significantly on Friday, dropping by 9.52% and settling at $1.55. The bearish sentiment persisted over the weekend, with the price dropping by over 8% on Saturday and settling at $1.42. Sunday saw XRP drop further, falling by 2.95% and ending the weekend at $1.38. Despite the bearish sentiment, the price pushed up on Monday, rising over 3% before falling back during the ongoing session.

Looking at IntoTheBlock’s IOMAP for the Cardano price, we see that ADA has strong support at around $1.36. At this price level, over 195,000 addresses have bought more than $4.2 billion ADA.

Looking at the 4-hour Cardano price chart, we can see that ADA had pushed above the 20 and 50-bar SMA, rising to $1.72. However, the price fell back after reaching this level, with ADA dropping below the 20 and 50-bar SMA and settling at $1.33, slipping back below the two SMAs. ADA pushed up marginally from this level, rising to $1.43 before dropping back to $1.30. ADA rose significantly from this level, as the price pushed above the 20-bar SMA and settled at its current level of $1.38. 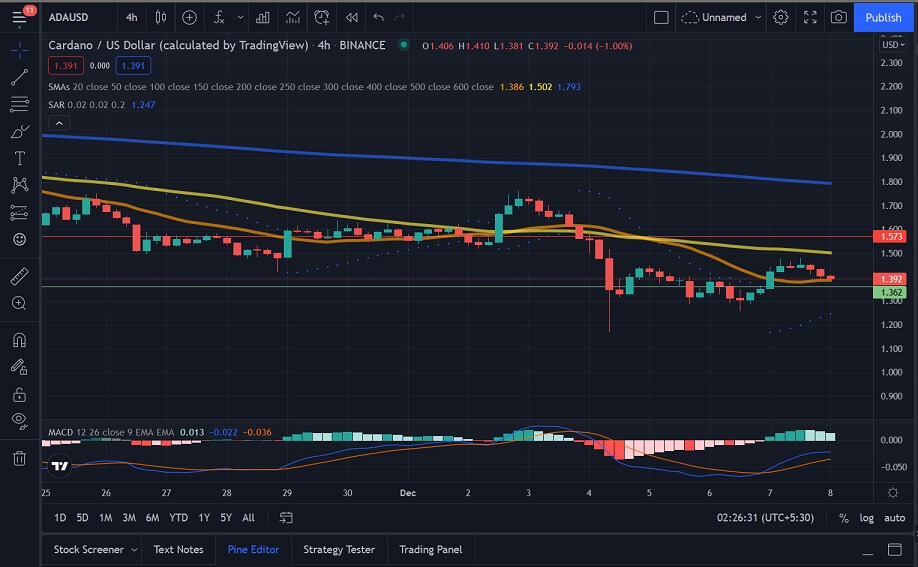 SundaeSwap has reportedly become the first fully functional DEX on the Cardano testnet. Smart contracts on Cardano hit a huge technical roadblock soon after being launched in September with the Alonzo hardfork.

In September of this year, one of the initial teams working on a DEX called MinSwap on Cardano testnet failed to achieve token swap functionality. Following this, Minswap as well other teams, including SundaeSwap, stated that Cardano dApps needed scaling solutions to mitigate concurrency problems.

After three months, SundaeSwap has seemingly deployed a working scaling solution, at least on the testnet. Its DEX leverages a transaction aggregation mechanism that makes it possible to exchange Cardano-native tokens with one another. Using smart contracts, the DEX also supports decentralized liquidity pools.

Users can connect a wallet service called Nami that is compatible with SundaeSwap testnet, then proceed with some test funds (tADA). They can then test the platform by either swapping tokens or adding liquidity. Adding test funds may take some time, depending on congestion.

As SundaeSwap is still in a testnet phase, the subsequent mainnet may launch in the coming weeks after the team fixes all reported bugs. However, a hard date for mainnet release has not been revealed.

The platform is still not free of bugs, though. While several users have reported successfully swapping tokens on the SundaeSwap testnet, others have complained about transaction delays of up to one hour and longer due to congestion.

Despite the congestion and bugs, the platform is considered a functional product. The development at SundaeSwap is a cause for excitement for the Cardano community and hints that DeFi on the network may be around the corner.

Looking at the Cardano price chart, we can see that ADA had recovered on Monday but fell back during the ongoing session. If bearish sentiment takes over, we could see ADA drop to $1.36, where the price could find support.