Cardano Price Prediction: ADA Drops By Over 2%, Could Slip Below $1.80

The Cardano price slipped below $1.90 during the current session, as sellers pushed the price down by over 2% during the current session. ADA had registered a sharp drop on Thursday, as the price dropped to $1.78, slipping below the 200-day SMA. The price recovered on Friday and rose to $1.86, an increase of over 4%. Saturday saw the price continue to increase, as ADA pushed above the 200-day SMA and settled at $1.92. However, the price was back in the red on Sunday, with ADA currently down by over 2.50%.

The Cardano price was quite bearish over the previous week and started the weekend in the same vein, dropping by 1.65% on Friday and settling at $2.04. The price pushed up marginally on Saturday but fell back in the red on Sunday, registering a drop of 0.57%. The bearish sentiment persisted on Monday, as ADA slipped below the 20-day SMA and settled at $2.01 before falling by over 7% on Tuesday and falling to $1.87. At this level, the 200-day SMA acted as support, and as a result. ADA pushed up marginally on Wednesday. 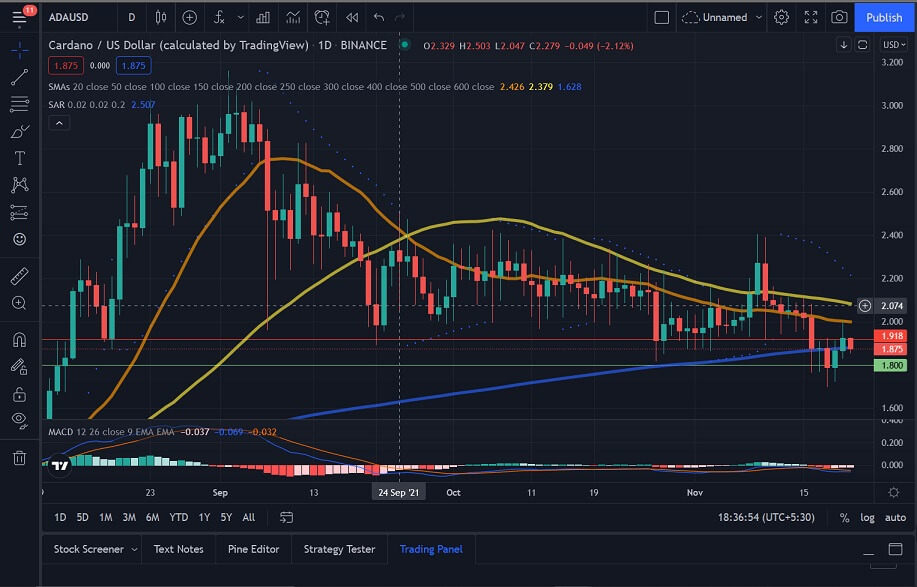 Looking at the Parabolic SAR, we can see that it is still bearish, indicating that the price could drop further during the current session.

We can see that the MACD is currently bullish. However, the Parabolic SAR has just flipped to bearish, indicating that ADA could drop. If the price does drop, we could see the MACD also flip to bearish. 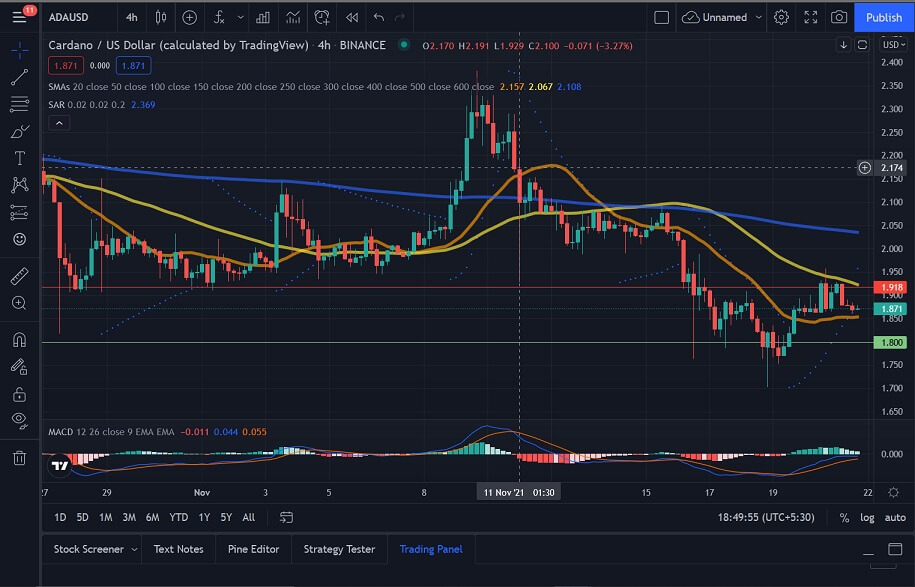 Cardano Founder: There Are Bigger Things At Stake

Cardano founder Charles Hoskinson recently reiterated the importance of fundamentals over short-term price action. Instead of focusing on price, Hoskinson called on those who are panicking over the sell-off to “calm down,” and “chill out,” implying there’s a bigger picture in play here.

“Lately, I’ve seen an unusually high number of people that are obsessed with price, or they say stuff like, “oh well, everything is failing, the sky is falling.” And there seems to be an utter lack of perspective.”

Specifically, the IOHK boss was addressing newcomers, who typically do not see the long-term vision of what cryptocurrency will do in the coming years. Explaining further, Hoskinson distilled this down to opting out of a fundamentally broken legacy system. Saying it is happening now at the nation-state level, citing El Salvador, with more to come, as examples of this.

Hoskinson singled out Dogecoin and Shiba Inu as examples of erratic price discovery. He added that neither has any real utility outside of a social network aspect. While some say this is enough to justify the price, Hoskinson disagrees. Instead, as an old-school thinker, he pointed to real fundamentals making a real-world impact as the way forward.

Tied with this is what Cardano is working on developing now across scalability optimization and governance. This, over the long term, puts Cardano in a solid position to be “the backend of many nation states.” Hoskinson envisions the chain running billions of transactions daily, managing national elections, acting as a property register for nation-states, and as the backbone for the identity systems of the future.

He added that all of this will converge at some future point, making Cardano “the biggest preserver of human rights the world has seen.”

Looking at the Cardano price chart, we see that ADA has registered a significant drop during the current session. If the current sentiment persists, we could see ADA drop to $1.80.