The Cardano price slipped below the $1.50 level during the current session, as sellers drove the price down over 9%. ADA had been quite bullish over the weekend, rising by almost 5% on Friday and moving to $1.29. The price remained at $1.29 on Saturday and then rose over 9% on Sunday, pushing above the 20 and 50-bar SMA, settling at $1.41. The week started with ADA extremely bullish, as it pushed up over 13% on Monday and settled at $1.60 before dropping back during the current session. 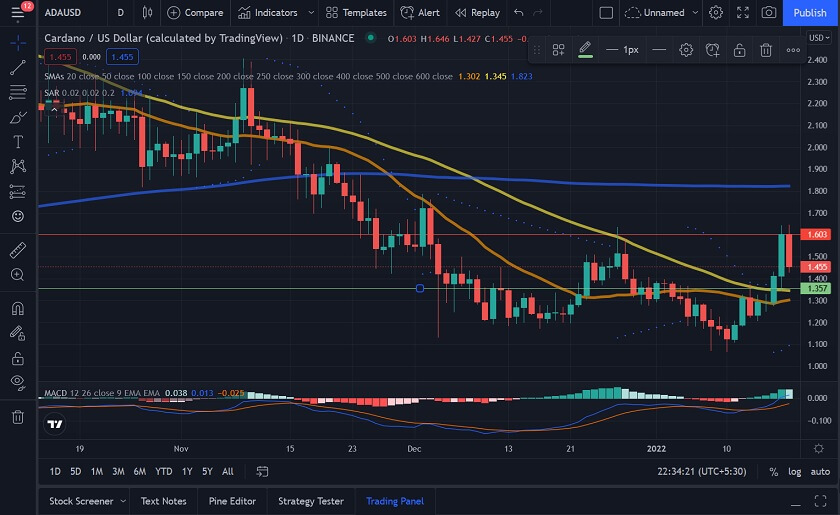 After dropping back on Thursday, the Cardano price recovered on Friday, rising to $1.29, where the 20-day SMA was acting as resistance. On Saturday, the price registered a marginal drop before surging past the 20 and 50-day SMAs and settling at $1.41. Monday saw the price remain bullish, as the price rose by nearly 14%, pushing to $1.60. However, during the current session, the price fell back, slipping below $1.50, and is presently at $1.45.

While the MACD is bullish, if the price continues to drop, we could see it flip back to bearish.

Looking at IntoTheBlock’s IOMAP for the Cardano price, we can see that ADA has strong support at around $1.35. At this price level, over 379,000 addresses have bought more than 4.8 billion ADA.

The Parabolic SAR and MACD have flipped to bearish, indicating that the price could drop further. 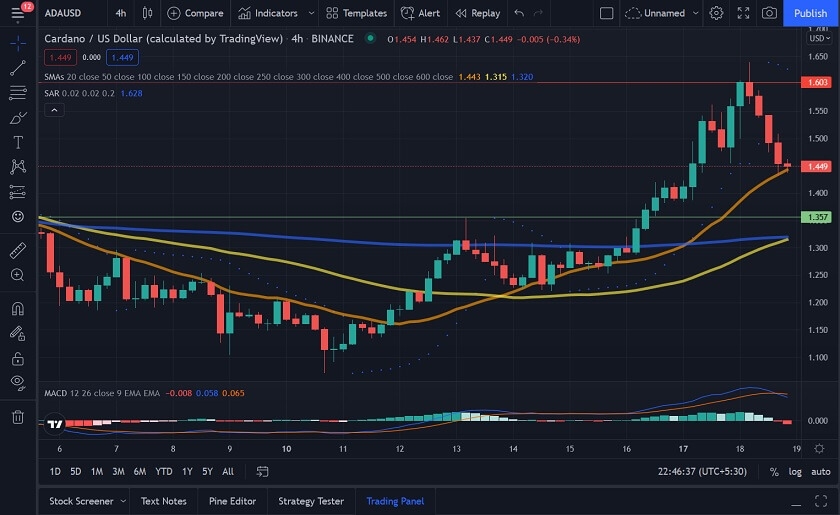 The transaction volume seen on the Cardano (ADA) network has briefly surpassed that of the Ethereum (ETH) blockchain ahead of the launch of a highly-anticipated decentralized exchange on Cardano called SundaeSwap.

According to data from Messari, Cardano’s daily transaction volume was at one point above the $7 billion mark, surpassing the daily transactions volume seen on Ethereum of around $5.4 billion. Both networks remained far below BTC’s $16.8 billion.

Transaction volumes on Cardano exploded after SundawSwap, a “native, scalable decentralized exchange and automated liquidity provision protocol” announced it was preparing to launch on mainnet on January 20. The platform is backed by cFund, Alameda Research, and Double Peak Group.

The decentralized exchange will launch with an Initial Stake Pool Offering (ISO), which will see people delegate their ADA to stake pools taking part in the ISO. So every epoch – around five days – delegators are given tokens.

Cardano’s transition volume explosion was accompanied by a significant price rise, with ADA moving up 8% in 24 hours. The cryptocurrency’s price appreciated over 17% over the last few days as new smart contracts start being used on Cardano. Notably, SundaeSwap is not Cardano’s first usable decentralized finance application. The network’s first DeFi platform, MuesliSwap, conducted an under-the-radar offering and saw its total value locked explode to over $1 million in little over two days. It now has nearly $4 million in total value locked.

MuesliSwap is a decentralized exchange with launchpad functionalities that has also been launched on top of the Bitcoin Cash blockchain. The platform is not available on either Ethereum or the Binance Smart Chain, two of the largest DeFi platforms by total value locked.

The price of ADA exploded last year ahead of the rollout of the widely anticipated Alonzo hard fork, which brings smart contracts into the network and allows it to compete with the Binance Smart Chain (BSC), Ethereum (ETH), and Solana (SOL).

Looking at the Cardano price chart, we see that ADA has registered a significant drop during the current session. If the current sentiment persists, we could see ADA drop to $1.40.