Cardano Price Prediction: ADA Looking To Push Back Above $0.90

The Cardano price is looking to push back above the $0.90 level, as buyers pushed the price up during the ongoing session. ADA had registered a drop of 1.39% on Thursday before making a strong recovery on Friday, pushing up by over 5% and moving to $0.89. The price fell back in the red, dropping by 1.22%, and then registering another drop of 3.49% on Sunday to end the weekend at $0.85. The current session sees ADA at $0.85, as buyers look to push the price higher.

The Cardano price registered a marginal increase on Saturday, starting the previous weekend on a fairly slow note. ADA fell back on Sunday, dropping by nearly 7% and ending the weekend at $0.93. Monday saw the bearish sentiment continue, as sellers pushed the price down by over 8%, with ADA dropping to $0.85. However, Tuesday saw ADA register a fairly strong recovery, as the price pushed up by nearly 4%, moving to $0.88, before falling back on Wednesday, dropping by 2.48% and settling at $0.86. 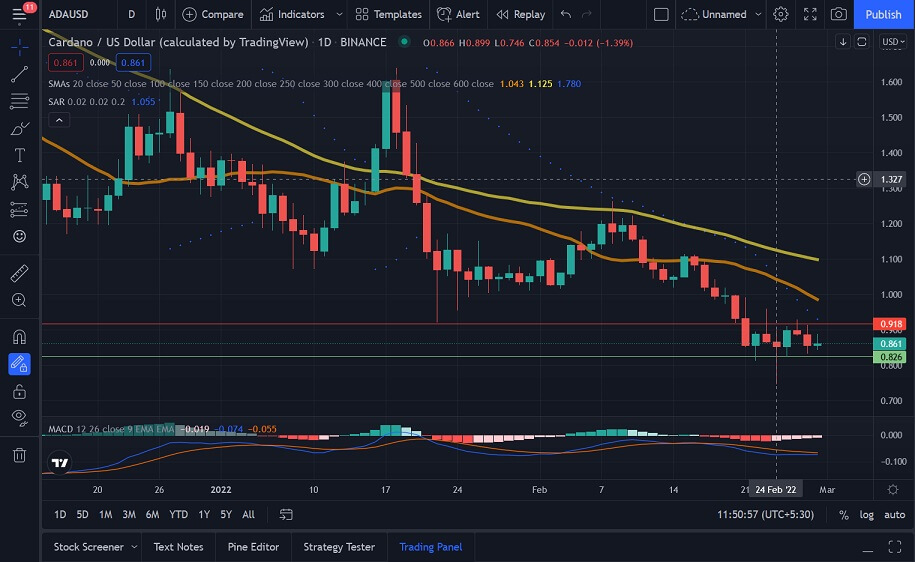 The Cardano price continued to drop on Thursday, as sellers dominated the market, pushing the price down by 1.39% and settling at $0.85. However, ADA made a strong recovery on Friday, pushing up by over 5% and moving to $0.89. ADA could not push to $0.90 and fell back, dropping by 1.22% on Saturday and then by 3.49% on Sunday to end the weekend on a bearish note at $0.85. The current session sees ADA back in the green, as buyers look to push the price to $0.90.

We can see that the MACD is currently bearish, but if ADA can continue to push higher, we could see it flip to bullish.

IntoTheBlock’s IOMAP for the Cardano price shows that ADA faces strong resistance at around $0.91. At this price level, over 64,000 addresses have sold more than 894 million ADA.

More On Cardano: What Might Happen If You Invest $100 In Cardano (ADA) Today?

The MACD and Parabolic SAR are both bearish, indicating a price drop, but if ADA can recover and push to $0.90, we could see it flip to bullish. 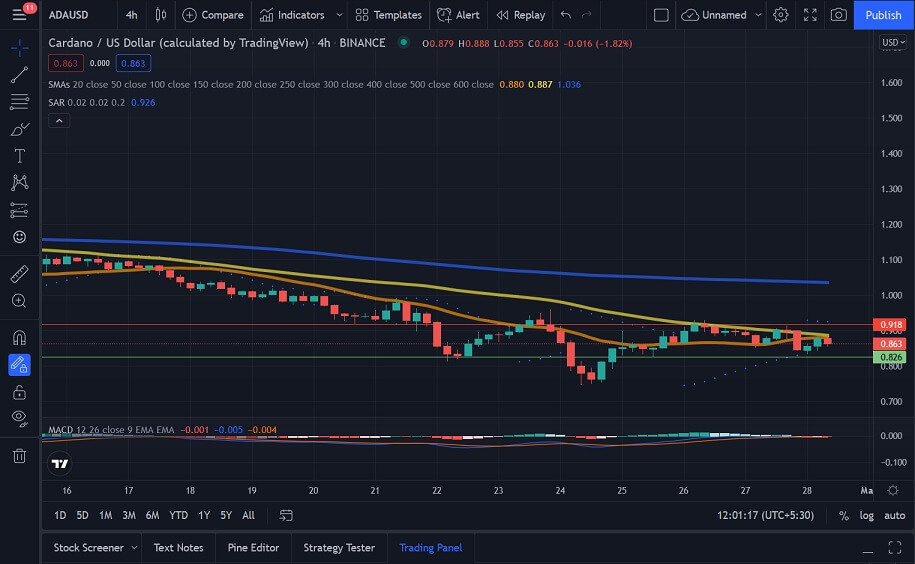 Cardano network has seen a rapid increase in the capitalization of DeFi products following the full release of the SundaeSwap platform and the growing number of decentralized products on the network, per DeFiLIama.

The majority of funds on the network is concentrated on the SundaeSwap decentralized platform, with $115 million currently locked. Second place is held by MuesliSwap decentralized finance platform with $2 million locked.

In comparison to networks like Ethereum or Polkadot, Cardano's ecosystem seems less diverse as almost 100% of the TVL is concentrated in a platform backed by network developers. For example, the first place TVL-vise on the Ethereum network is held by Terra with $20 billion locked, which is less than 20% of the TVL.

With the increased usage of the network and a slight rebound on the crypto market, ADA was able to bounce from the local bottom and even reach the $1 resistance point.