The Cardano price continued its bearish trend, as the price continued to drop during the current week, with ADA registering a drastic fall during the current session. ADA has been bearish since the previous week, with the price registering a drastic fall on Wednesday, dropping by over 7%, slipping below the 50-day SMA, and settling at $2.10. ADA remained bearish for the rest of the week, as it dropped to $2.04 on Friday. At this level, the 20-day SMA was acting as support; however, ADA slipped below this level by Monday, dropping to $2.01.

After dropping to $2.10 on Wednesday, the Cardano price continued to drop, slipping by 0.92% on Thursday and 1.65% on Friday to settle at $2.04. ADA pushed up marginally on Saturday before falling back on Sunday and ending the weekend at $2.04. ADA started the current week on a bearish note as well, as it slipped below the 20-day SMA and settled at $2.01. The current session sees ADA down by almost 5%, with the price also having slipped below $2.

Looking at IntoTheBlock’s IOMAP for the Cardano price, we see that ADA faces strong resistance at $2.05. At this price level, over 385,000 addresses have sold over 5.4 billion ADA.

The Parabolic SAR and MACD have both flipped to bearish, indicating that the price could drop further. 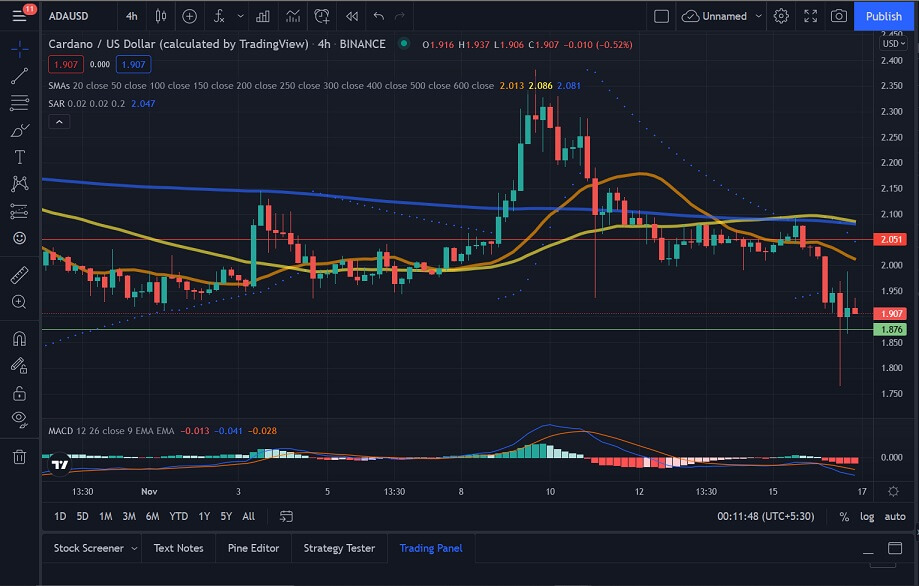 Cardano Is The 2nd Most Active Chain

The ongoing Cardano network development appears to be yielding results, with the cryptocurrency recently emerging among the top active chains over 24 hours. Over the period, Cardano recorded $18.24 billion in transaction volume to rank in the second spot behind Bitcoin, ​​according to data provided by Cardano Daily.

Overall, ADA continues to emerge among the most highly sought-after cryptocurrencies due to its still-relatively low price. The network is accompanied by high-level marketing and the potential of being an “Ethereum killer.”

With increasing use cases, ADA has gained consistently, although Ethereum also continues to surge in value while dominating the decentralized finance and non-fungible tokens (NFTs) sectors. In general, the high transaction volume reflects the growing utility of the Cardano network, with investors projecting sustained future spikes.

Looking at the Cardano price chart, we see that ADA has fallen drastically during the current session. If the current sentiment persists, we could see ADA drop to $1.85, where the price could find support.