The Cardano price continued to drop during the current session, as sellers look to push ADA down to $1.15. ADA had ended the weekend on a reasonably positive note, rising by 1.51%, moving above the 20-day SMA, and settling at $1.14. Monday saw ADA remain bullish, rising by almost 5% and settling at $1.19, before dropping back on Tuesday and falling to $1.17. The current session sees ADA down to $1.16, with sellers in control.

The Cardano price had registered a drop of over 2% on Sunday (30th), ending the previous weekend on a fairly bearish note. However, ADA was able to recover on Monday, rising by 1.54% on Monday, and then register an increase of over 4% on Tuesday and rise to $1.09. However, the price fell back on Wednesday, dropping by over 6% and falling to $1.02. ADA registered a strong recovery on Thursday, rising by over 3% and surging by over 7% on Friday, and moving to $1.14. 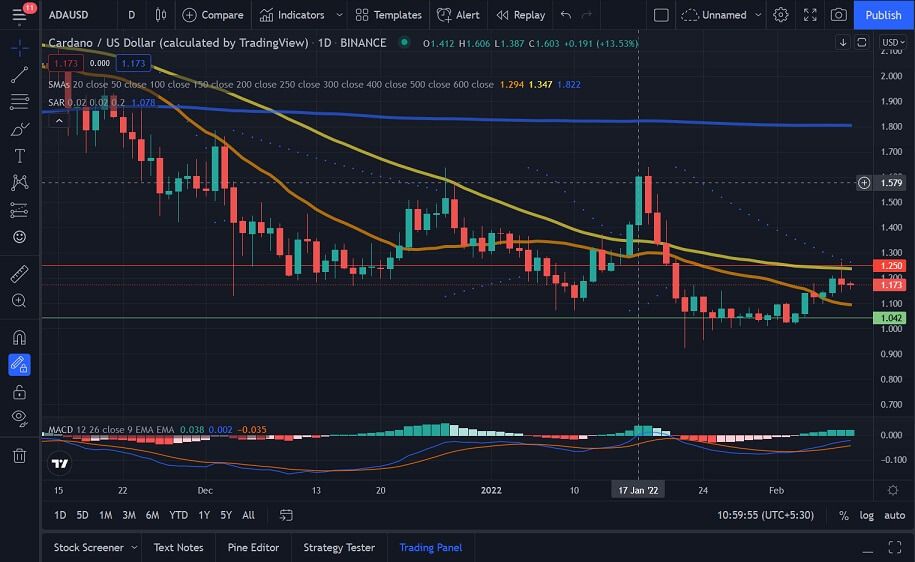 The weekend saw the Cardano price register a marginal drop, thanks to the 20-day SMA acting as resistance. The price fell back by 1.23% on Saturday before recovering on Sunday, rising by 1.51%, pushing past the 20-day SMA and settling at $1.14. Monday saw ADA continue to push higher, rising to $1.19, before dropping back on Tuesday and falling to $1.17. The current session sees ADA marginally down as sellers look to push the price lower.

Looking at IntoTheBlock’s IOMAP for the Cardano price, we can see that ADA has strong support at around $1.04. At this price level, over 260,000 addresses have bought 5 billion ADA.

We can see that the MACD and Parabolic SAR are currently bearish, but if ADA can recover, we could see them flip to bearish. 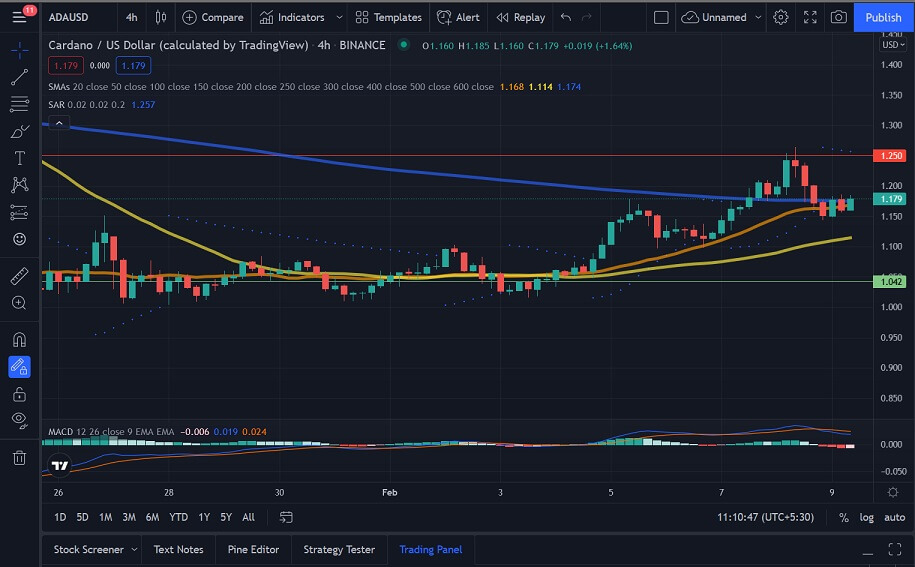 The Cardano (ADA) blockchain has recorded another milestone in transaction numbers reaping from the network’s development that has accelerated in recent months. The total Cardano transactions recently stood at 30.4 million, an addition of over four million transactions since January 10, 2022, data by Google Data Studio indicates.

In the first week of February, Cardano has added nearly 880,940 transactions. The new transaction milestone aligns with Cardano’s projected increase in network activity due to a spike in adoption. The expected growth saw IOHK (company behind Cardno) announce an increase in block sizes with a focus on optimizing scalability.

The platform released a detailed guideline on how it plans to scale the network in 2022. Notably, the rise in the block size by 12.5% places the Cardano network in a position to handle more transactions per second.

The surge in transactions also highlights the potential impact of the rollout of smart contract capabilities on the Cardano network.

The focus on scalability has resulted in Cardano emerging as a critical competitor to Ethereum. Although Ethereum is more established, Cardano has the upper hand due to speed and lower transaction fees.