The Cardano price has surged during the ongoing session, as buyers pushed the price above $1.70. ADA had been quite bearish during the week and had managed to achieve only a marginal increase on Monday. The price dropped back on Tuesday, falling by over 3%, before registering another marginal drop on Wednesday and dropping back to $1.54, before pushing up significantly during the current session.

The Cardano price was quite bearish during the previous week, registering a drop of over 3% on Monday. ADA continued to drop on Tuesday, registering a drop of 1.54%, and Wednesday, when it registered a drop of almost 5%, dropping to $1.66. ADA was able to post a marginal recovery on Thursday despite the prevailing bearish sentiment but dropped back on Friday, as it fell by over 8% and settled at $1.53. 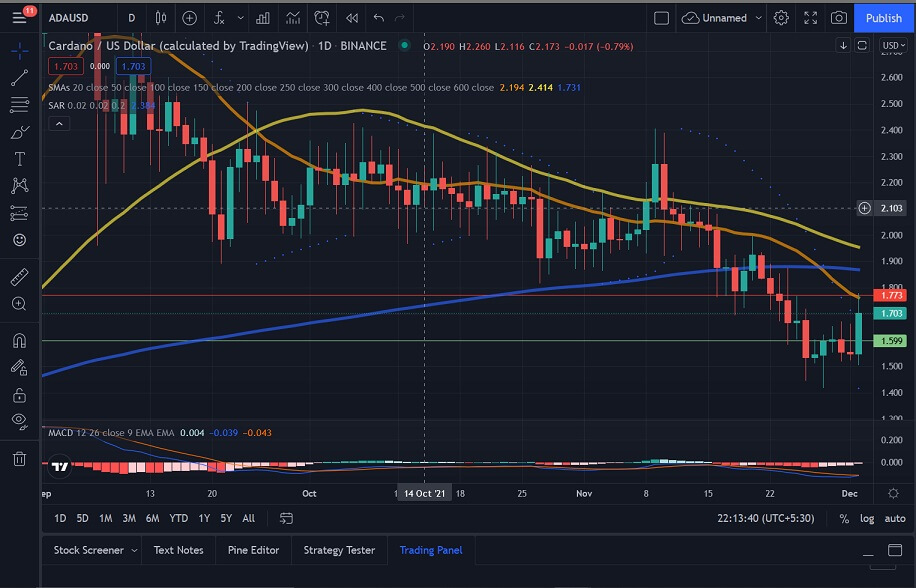 After dropping to $1.53 on Friday, the Chainlink price pushed up over the weekend, registering an increase of 0.73% on Saturday and then 3.28% on Sunday to end the weekend at $1.41. On Monday, the price remained in the green as it managed to register a marginal increase but fell back on Tuesday, dropping by over 3% and settling at $1.55. ADA continued to remain bearish on Wednesday, as the price registered a marginal drop before pushing up significantly during the ongoing session.

Looking at IntoTheBlock’s IOMAP for the Cardano price, we can see that ADA has strong support at around $1.58. Over 310,000 addresses have bought more than 6 billion ADA at this price level.

We can see that the MACD has flipped to bullish, indicating that we could see the price push higher during the ongoing session. 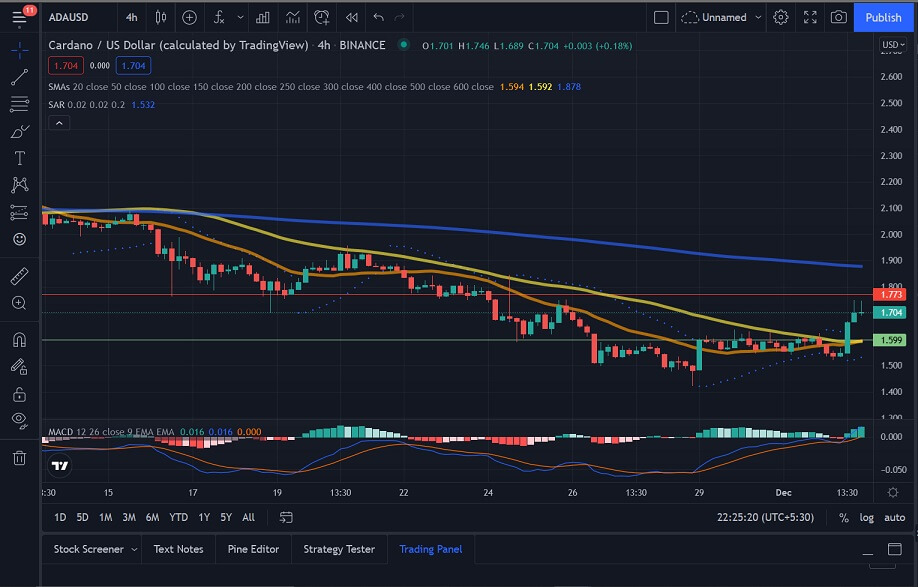 Cardano-based decentralized exchange SundaeSwap has announced that its testnet launch will take place on December 5. Thousands of users will be able to try out one of the most notable projects on the Cardano network.

The testnet aims to discover bugs and inefficiencies before the mainnet launch. It will also help the Input-Output team to adjust the performance metrics of the network so that it can work smoothly under heavy load:

"Our testnet is the perfect opportunity to put the new parameters under load so they can assess performance and further raise these limits."

Implementing such incremental changes will be crucial for making Cardano scalable enough for the decentralized finance sector.

US SEC Chair Gary Gensler recently said that new technologies do not persist if they fail to comply with the law. While Gensler believes that decentralized finance could be the source of innovation, he claims that it has to fall within the existing regulatory framework:

"The innovation around DeFi could be real, but they won't persist if they stay outside of the regulatory framework."

Gensler also voiced his concerns about the centralization of some DeFi projects and implied that the goal of such projects might be to skirt existing anti-money laundering laws.

Speaking of the regulator's reluctance to approve a spot Bitcoin exchange-traded fund, Gensler said that trading around the globe is not inside the US regulatory register. He urged the trading and lending platform to "come in and talk."

Looking at the Cardano price chart, we see that ADA has surged during the ongoing session, with buyers in complete control. If the current sentiment persists, we can expect ADA to push towards the 2-day SMA at $1.77.