The Cardano price continued to drop during the current session, as ADA slumped to $0.75, with sellers dominating the market. ADA had started the week in the red, dropping by over 8% to $0.85 on Monday. The price recovered on Tuesday, rising by 3.62% but falling back on Wednesday, dropping by 2.48% and settling at $0.86. The current session sees ADA at $0.75, down by over 13%, as sellers dominate the markets.

The Cardano price started the previous week on a fairly positive note, rising by 0.67% on Monday and then rising by almost 6% on Tuesday, pushing above the 20-day SMA and settling at $1.10. ADA fell back on Wednesday, dropping back below the 20-day SMA and falling to $1.08. Thursday saw ADA continue to drop, falling by 5.72% and dropping to $1.02 and then slipping by the $1 level on Friday when the price dropped to $0.99. 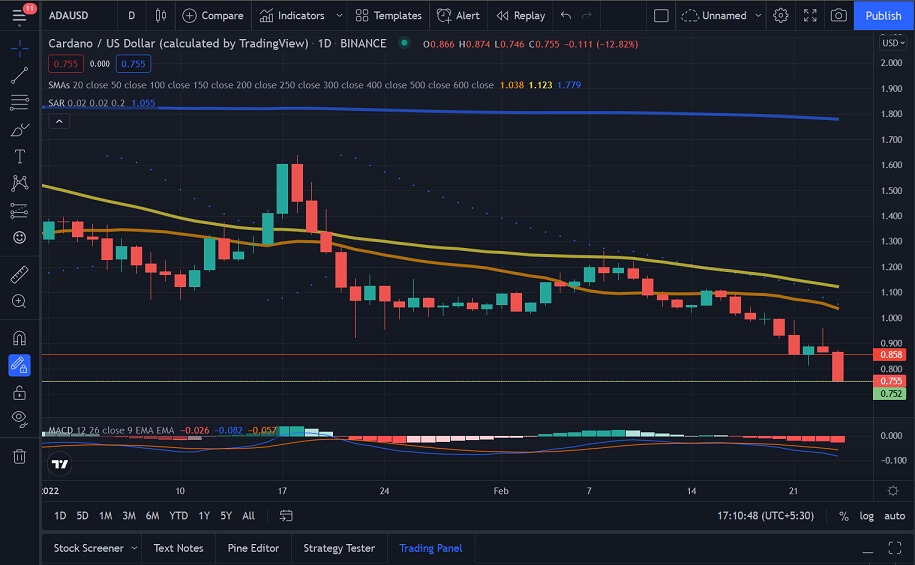 Despite the bearish sentiment, the Cardano price registered a marginal increase on Saturday but fell back into the red on Sunday, falling by over 6% and ending the weekend at $0.93. The bearish sentiment persisted as ADA dropped over 8% on Monday before recovering on Tuesday and rising to $0.88 after an increase of almost 4%. However, ADA fell back on Wednesday, dropping by 2.48% and dropping to $0.75 during the current session.

IntoTheBlock’s IOMAP for the Cardano price shows that ADA faces strong resistance at around $0.85. At this price level, over 32,000 addresses have sold more than $381 million ADA.

The 4-hour Cardano price chart shows us that ADA had pushed up to $1.01 on the 19th. The price fell back from this level, dropping to $0.94 on the 20th. ADA was able to make a fairly strong recovery from this level, rising to $0.97 on the 21st. At this level, the 20-bar SMA was acting as resistance, and the price dropped significantly, falling to $0.82 on the 22nd. ADA made a strong recovery from this point, moving past the 20-bar SMA on the 23rd and moving to $0.93. However, after reaching this point, ADA fell back significantly, dropping to its current level of $0.76.

We can see that the RSI has slipped below the neutral zone, indicating that ADA could recover marginally in the short term.

More On Cardano: Is Cardano A Good Buy Or Goodbye 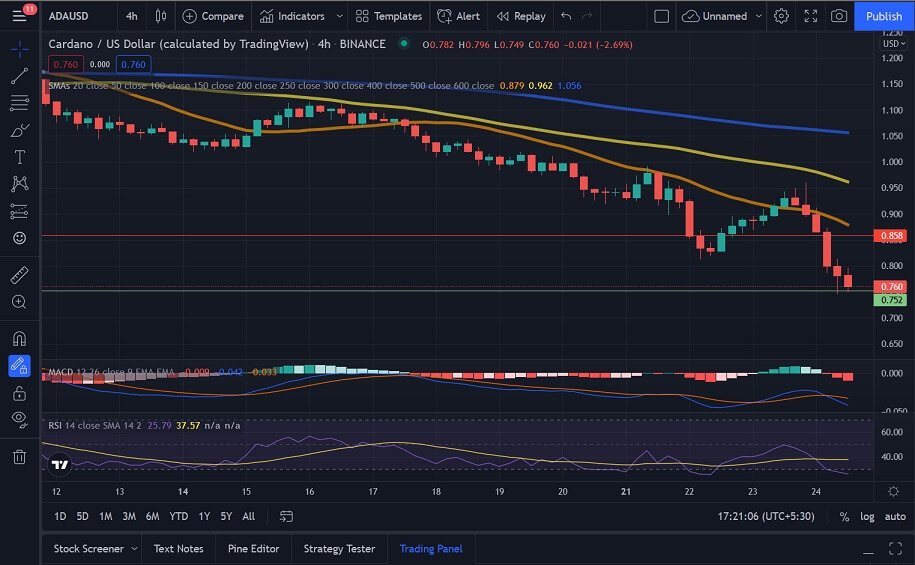 Input-Output CEO Charles Hoskinson shared his thoughts on the crypto market downturn during his recent AMA session. Despite the fear and panic triggered by the threat of war and the increasingly authoritarian stance of specific regimes, he spun the situation as a necessity, or lesson to learn, to bring about the global adoption of digital assets.

As such, his view is that the current geopolitical situation, as alarming as it is, is merely a step towards a more egalitarian future. The last week saw the crypto market capital outflows totaling $225 billion, an 11% loss in value.

But given the broader political landscape, especially the ongoing Russian-Ukraine crisis, which saw an escalation from both sides this week, including the White House imposing sanctions against Russia, some analysts do not foresee the situation improving, at least not in the short-term.

When taken in conjunction with Bitcoin on-chain metrics, which indicate lessening demand and interest, the situation is even direr. Technical analyst Francis Hunt, also known as the Crypto Sniper, warned that the relief rally we are currently experiencing is not definitive evidence of a bottom. With that, he advocates investors remain defensive.

"Bitcoin & Crypto, do not mistake short term temporary relief that may even drift up for a number of days, as proof of BOTTOMING."

Hoskinson said he finds it curious that crypto markets appear to run in tandem with stocks. In his mind, crypto-assets should operate countercyclical to what’s happening in the macro-environment.

“It makes no sense at all because if we’re going to war, and we’re worried about inflation and chaos and tragedy you would think the opposite would be true. That, as instability occurs here, that crypto-assets are a safe haven..”

Looking at the Cardano price chart, we see that ADA has been extremely bearish during the current session. If the bearish sentiment continues, ADA could slip below $0.75. However, we can see that ADA has clawed back a little and has pushed up to $0.76 at the time of writing.

Can Cardano Make Me Rich?

Is Cardano a Good Buy?

How To Trade Cardano (ADA): A Step-by-Step Guide