The Cardano price has started today’s session with an increase of over 2%, as buyers look to push ADA above the 20-day SMA. ADA had dropped by nearly 4% on Friday, falling to $1.30. However, the price recovered on Saturday, rising by over 5%, moving above the 20-day SMA and settling at $1.37. On Sunday, the price fell back, registering a marginal drop, before falling over 4% on Monday, slipping below the 20-day SMA and settling at $1.32. The price continued to drop on Tuesday, falling to $1.30, before recovering during the ongoing session. 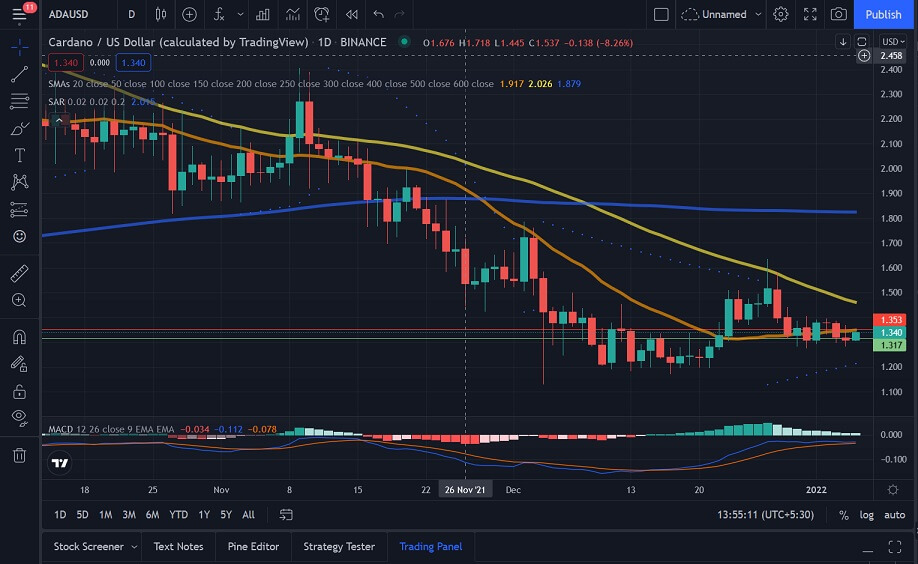 The Cardano price made a strong recovery over the weekend, as it rose by over 5%, pushing back above the 20-day SMA and settling at $1.37. However, the price was back in the red on Sunday, registering a marginal drop. The price registered a significant drop on Monday, as the price slipped below the 20-day SMA, dropping to $1.32. ADA continued to drop on Tuesday, falling by 0.83%, before recovering during the current session.

We can see that the Parabolic SAR is currently bullish, indicating that ADA could push higher.

Looking at IntoTheBlock’s IOMAP for the Cardano price, we see that ADA faces strong resistance at around $1.35. At this price level, over 326,000 addresses have sold more than 4.3 billion ADA.

We can see that the MACD is currently bullish, but if ADA is unable to move past the 20 and 200-bar SMAs, we could see the price drop, and the MACD could flip to bearish. 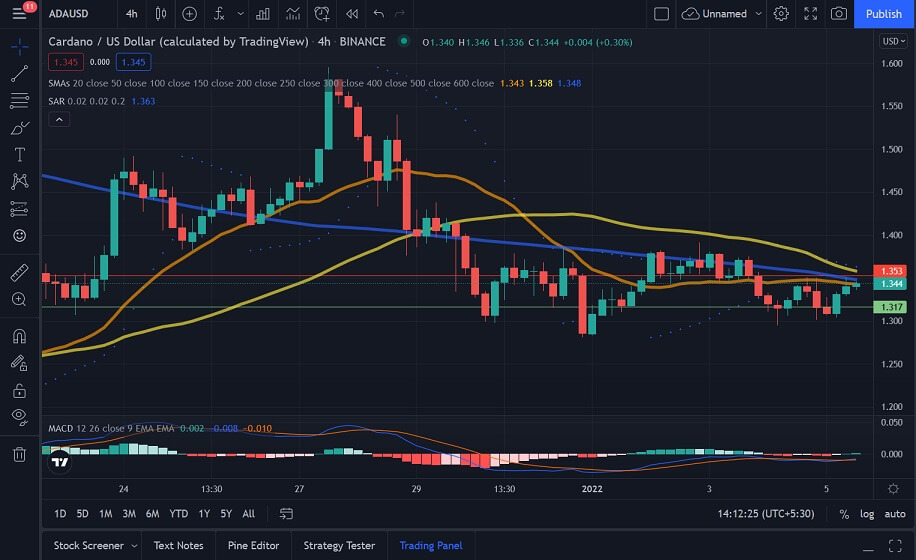 “Where we are going, we don’t need VCs because we have already built one of the largest.”

Notably, Cardano also won the crown of the most actively developed cryptocurrency in 2021. In a ranking by Santiment, Cardano was the most developed project on GitHub, which scaled over 140,000 events. As per Hoskinson’s recent update, there are over 127 projects that “intend to or are actively building on Cardano.”

In a live Youtube session last week, he had curiously called the next 90 days “a very busy time,” with new developments executing on the chain. On the back of which, he expects the number of ADA users to grow tenfold from the existing 2 million.

It is also noteworthy that Cardano recently made its debut on DeFillama.

DEXs on Cardano is something that might populate the chain, as per the CEO’s previous video, where he had stated:

“[DEXs] They are already on the testnet. There are already some on the mainnet, and there’s just a lot of competition there.”

It’s has been around four months since Cardano’s anticipated Alonzo hardfork deployed smart contracts on the platform. There was significant traction among developers and users on Cardano since then. Still, the platform has received heavy criticism from the community too.

Tech giant Samsung will now have exposure to Cardano via its recent partnership with blockchain planting management system Veritree. Cardano Foundation's Sidney Vollmer took to Twitter to share the news.

"Wow! @Samsung 's land restoration efforts – 2 million trees to be planted this quarter, done by our great friends at @veritree, will live on our blockchain! Meaning: Samsung will now get exposure to #cardano."

Mangrove forests are estimated to store more than ten times more carbon dioxide than other tropical forests. The partnership was announced during the annual Consumer Electronics Show (CES) held in Las Vegas.

Mark Newton, head of corporate sustainability at Samsung Electronics America, said in a statement that investing in innovative technologies was “vital” in fighting climate change:

"Investing in tech innovations, such as those that create efficiency improvements and minimize waste, in combination with nature-based solutions, are vital in the fight against climate change."

Users who donate at least 500 ADA will receive digital planting certificates as well as “NFTree Art.” “Highballers” who fork out 100,000 ADA tokens will be able to get “globally unique” NFTree art as well as their name on the map.

Tree planting sessions are scheduled to continue to the end of 2022, according to a roadmap presented by Veritree.