The Cardano price was able to register only a marginal increase during the ongoing session as buyers look to push the price above $1.12. ADA had been relatively bullish before the weekend and had registered an increase of over 3% on Thursday, rising to $1.06. Friday saw ADA surge by over 7% as the price moved to $1.14 before dropping back on Saturday and falling to $1.12. The current session has seen a marginal increase as sellers look to push the price higher.

The Cardano price started the previous weekend on a slightly positive note, registering a marginal increase on Friday. The weekend saw ADA continue to push higher, rising by over 1% on Saturday before dropping back on Sunday and falling over 2%, ending the weekend at $1.03. However, ADA registered a recovery on Monday, rising by 1.54% and moving to $1.05. On Tuesday, the price continued to push higher, rising by over 4% and moving to $1.09, before registering a sharp drop on Wednesday, falling over 6% and settling at $1.02. 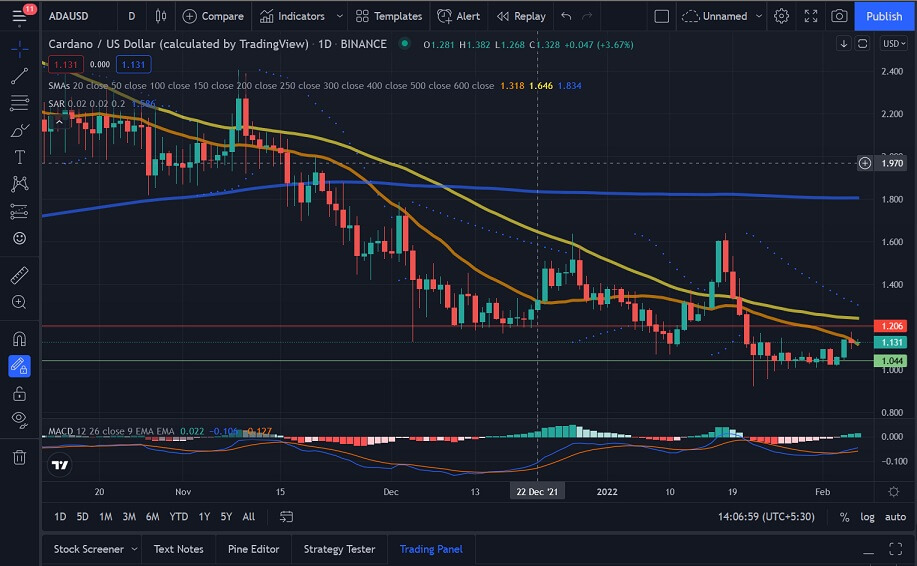 After dropping over 6% on Wednesday, the Cardano price was able to recover on Thursday, rising by over 3% and settling at $1.06. Friday saw ADA push up by over 7% as ADA rose to $1.14. However, the 20-day SMA was acting as resistance at this level, and the price fell back on Saturday, falling by 1.23% and settling at $1.12 before recovering during the ongoing session.

We can see that the MACD has flipped to bullish, indicating that we could see the price continue to push higher.

Looking at IntoTheBlock’s IOMAP for the Cardano price, we can see that ADA has strong support at around $1.04. At this price level, over 316,000 addresses have bought more than 5.5 billion ADA. 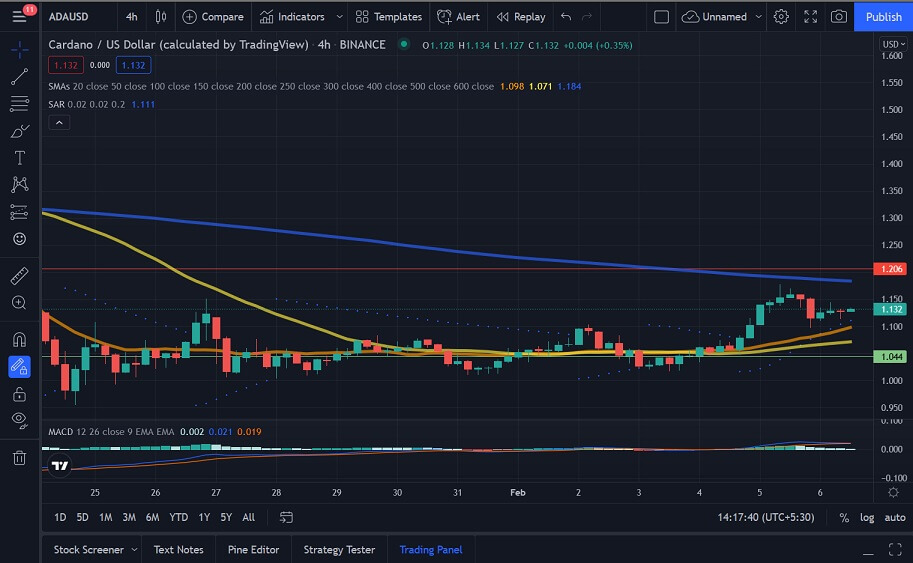 On Cardano, the report said:

“Cardano initially took on notoriety among a class of ICO-craze-driven projects in 2017 following the network’s launch. While the ICO-wave gained infamy from the number of overpriced assets that ultimately disappeared into crypto dust, Cardano finds itself among a subset of ICO Warriors that persisted the treacherous perils of a dark and quiet crypto winter — bloody, beaten, yet hungry for more.“

The report noted Cardano is a value-driven project, emphasizing community governance, academic peer-review, and the importance of high assurance programming. The authors added that Cardano’s values have noticeably directed the project’s developments and design decisions.

As a result, the blockchain "looks like it has been designed with the purpose and standards of providing decentralized, global, financial infrastructure rather than only focusing on providing a Web experience.“ The report added:

“With ambitious goals, Cardano recognizes the necessity for their infrastructure to run correctly the first time it runs. This is in contrast to a ‘launch now, fix as we go’ philosophy employed by many Silicon Valley development teams.”

The authors also mentioned that Cardano saw a massive uptick in adoption starting late 2020 and throughout 2021. The platform "underwent exponential growth in nearly every adoption metric listed, both on-chain and off-chain. There are now nearly 3 million wallets (1348% annual growth) on the network and over a million delegated wallets (870% annual growth).“

Looking at the Cardano price chart, we can see that ADA has registered a marginal recovery during the ongoing session. If the current sentiment persists, we could see ADA push towards $1.15.